I had a Baja, now I have a super deluxe.

I hope you keep your job, because you have correctly identified that you do need a tele in your life. I love 'em. they're such solid performers. you can bash them, twang them, strum them, pick them. They do it all, in a simple easy to get on with package...

Less controls = better in my book....

Well good luck with the interview (which you may well be having as I write). And as others have said, your logic is faultless!
Big Tele fan here; used to be a Epiphone / Gibson player when I was in a band and always thought it ideal given what we were playing. But once I got a Tele (and now have 2), I never looked back; much more versatile I thought and better sounding anyway.
A mate also has a Squire Tele (can't remember what model) and I agree with the comments above - it's a wonderful guitar and possibly hugely underrated due to its price.
Let us know how you get / got on!

Good luck with the interview!

I'm starting to think that I have a Tele shaped hole in my life too - gotta complete the holy trinity if nothing else. :beamup:

I had a Squier Tele which I sold last year. I have been asking myself "WTF was I thinking" ever since!

BJG145 wrote:I never really "got" Telecasters before. But I'm starting to feel there's a Tele-shaped gap in my life.

I've got a work interview on Friday morning to keep my job in a restructuring/redundancy situation. So I've decided that, if I keep my job, I'll get a Tele to celebrate. And if I don't, I'll get one as a consolation.

The logic seems pretty solid to me. ;)

How did the work interview go??? I'm sure I'm not the only person who hopes it went in your favour, sir!

Well...I didn't get the job. But I did order a very nice Tele. (Secondhand 2016 Butterscotch Elite.) 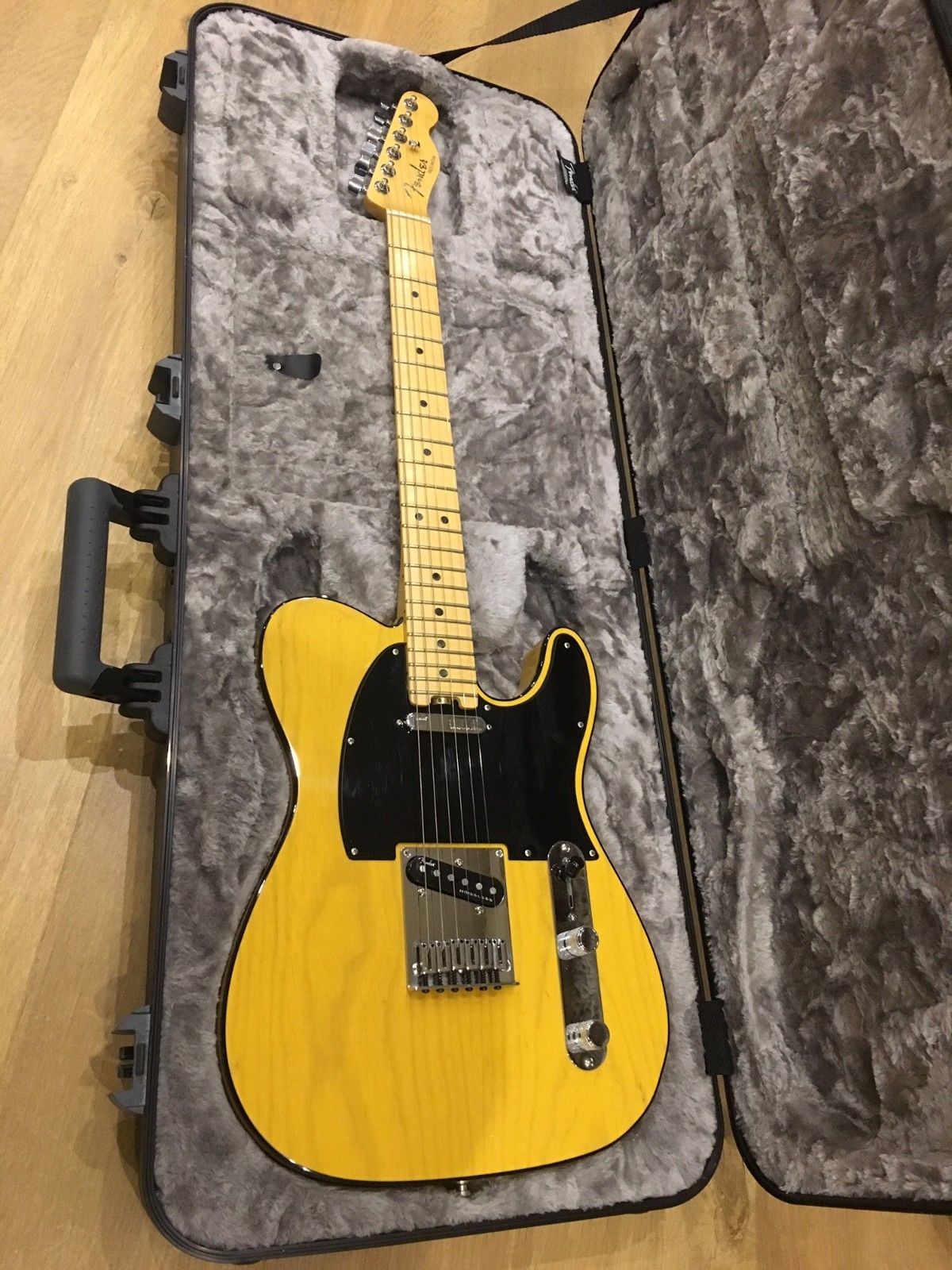 Sorry to hear you didn't get the job :thumbdown:

Well...I didn't get the job. But I did order a very nice Tele. (Secondhand 2016 Butterscotch Elite.)

I have two teles. I now need a third.
Lovely!

ooo soory about the job, but your logic is working as planned! Gorgeous tele!

I have four teles, one built by me so it only looks like a tele, a AVRI '62 in sea foam and two custom shops, one with hand wound pickups and that guitar will be cremated with me.

Likewise sorry to hear about the job, but that is a nice bit of compensation. :)

I have five teles: four yamahas (including two converted to Esquires, one set up for slide), one real deal US. I love Teles.

"The performance is 99.9% of what people hear"- J. Leckie
"It's all complete nonsense, anyone who knows what they're doing can deliver great results with whatever comes to hand" - H. Robjohns
Top

Sorry about the job!
That's a gorgeous telecaster! :thumbup:

Sorry to hear that you didn't get the job :(

Nice Tele!! I absolutely LOVE butterscotch blonde Teles. The truss rod adjustment wheel is a welcome addition on the elite series instruments too I feel.

+ the case is lovely!

I have a serious yearning for a 7 string, I'd love a 7 string Jazz Box or, this Selmer style that is on ebay just now. I definitely don't want a metal monster but I came across a 7 string Tele style from Thomann which looks quite presentable and is dirt cheap. As a proof of concept it may be just the job and it's not like Tele's don't have Jazz credentials with Ted Greene and Joe Pass playing them.

I intend to try BEADGCF (parralel 4ths) or standard tuning with a low A, both have their attractions

"I used to think I was indecisive, but now I'm not too sure."
Checkout my blog: VST Plugins Free Download
Top

A self-hacked together Frankentele, based on an £80 Winfield tele-alike I bought in Oxford years ago because I loved the neck profile. This now has decent Gotoh tuners and through body stringing to a compensated three barrel bridge, all topped off with a pair of Custom Shop 52 reissue pickups. It`s a bit good to play even if it doesnt sound like yer average tele.

Who needs a real one?

Let me share my recipe for Wabbit stew with you!
Top

...the Tele has caused a mild degree of hassle; when it initially turned up, the neck pickup wasn't working, or only worked very intermittently. ("Fender Gen 4 Noiseless"). So I took it to the local guitar shop who declared it fixed a week or so later...nope, just the same. Took it back again, and two weeks on, they've called to say they'll need to get a new set. (It's apparently not uncommon for the neck pickup to packup on these, and Fender don't sell them separately.)

But I don't mind too much; just impatient to get my hands on it.

Meanwhile, I've picked up another job which carries on when my current one finishes at the end of the month, which is a relief. (Mainly the respite from all the well-wishers who keep asking "Have you got a job yet??")

I always thought people were daft when they went straight from one job into the next without a break, but I've discovered that when you're faced with the prospect of losing one, and you're invited to start another the day after, you tend not to hesitate.

It's actually part-time...and I'm dreaming of the possibility of being able to scrape by on that with a lot more time to get on with doing some music instead of just thinking about it. Or at the very least, have more time to think about doing it.

It even occurred to me that it might be possible to earn a little extra money from it...but no, that's an absurd idea...! :tongue: