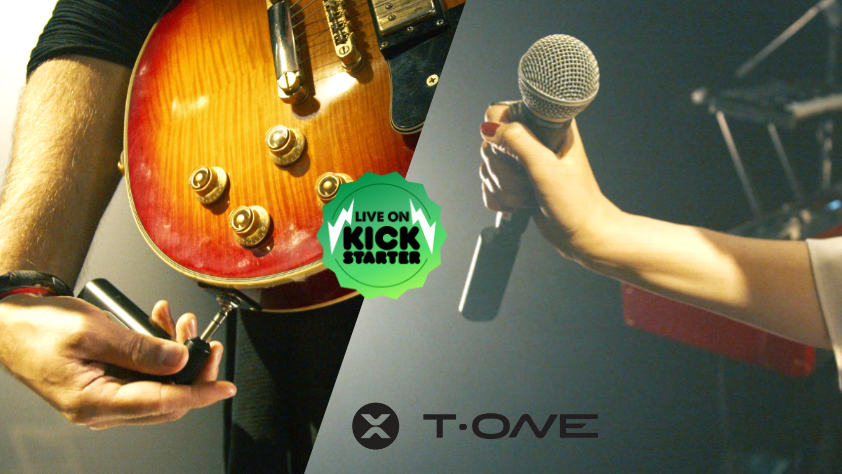 TYXIT is a Swiss start-up specialized in wireless technology for audio. After 3 years of development, we are launching our new, next-generation technology on crowd-funding site Kickstarter. Catering to the live music industry, our wireless personal monitoring and recording audio system frees musicians and bands from cables and cumbersome set-ups. The stand-alone, portable system named the “T.ONE” – is a pocket-sized device delivering wireless monitoring, mixing, recording and more, all with ultra-low latency under 2 ms and impeccable audio quality.

Our technology is easy to use. Each musician or singer plugs a T.ONE transmitter into their instrument or microphone, the sound signals are immediately transmitted to each of the receivers plugged into the musicians’ in-ear headset and a venue’s PA sound system. A mobile app for smartphones and tablets is used to control the setup and each individual mix. In seconds – literally – a band can be operational after plugging their T.ONE devices in. Available with the usual connectors used in music equipment - 1/4", 1/8", or XLR - T.ONE transmitters are capable of transmitting high-quality audio with up to 10 simultaneous streams, all with negligible latency. TYXIT enables recording and mixing on the go and uses a proprietary radio protocol on 5.8 GHz ISM Band and audio codec for fast compression and high-quality audio.

Built using cast metal and other high-grade materials and designed with comfort and sturdiness in mind for touring and road trips, each plug device is engineered following the standards of Swiss engineering: attention to detail, impeccable finish and tight tolerances.

We aim to create a community of pioneers and for that reason launched a 30-day Kickstarter campaign, engaging directly with musicians from all walks of life through the crowd-funding campaign.

Earlier this year, TYXIT showcased the T.ONE at the CES Convention in Las Vegas, where it won a prestigious Innovation Award, and the NAMM Music Show in Anaheim. It is supported by the Swiss Confederation, the regional Vaud Office for Economic Affairs and Innovation, Venture Kick, and Accelerace.

You can back the TYXIT T.ONE on their Kickstarter page now, starting at about $249 for a pair of devices for the Super Early Bird adopters. Further info can also be found on TYXIT’s website.

Everything You Wanted To Know About Studio Headphones.
4 weeks 9 hours ago.