Help me understand mid side encoding Skip to main content

Help me understand mid side encoding

Print view
All about the tools and techniques involved in capturing sound, in the studio or on location.
Post a reply
8 posts • Page 1 of 1

Help me understand mid side encoding

When using the MS mic on the Zoom H2n the angle of the S mics can be set.

In MS only mode MS-raw can be chosen. 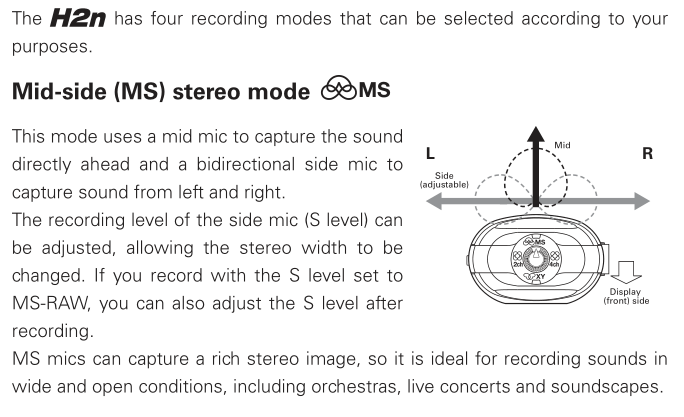 The balance between M and S on the stereo track can be dialled in in post with a MS decoder VST. Sounds nice, quite a scope wo work with between inner and outermost setting. 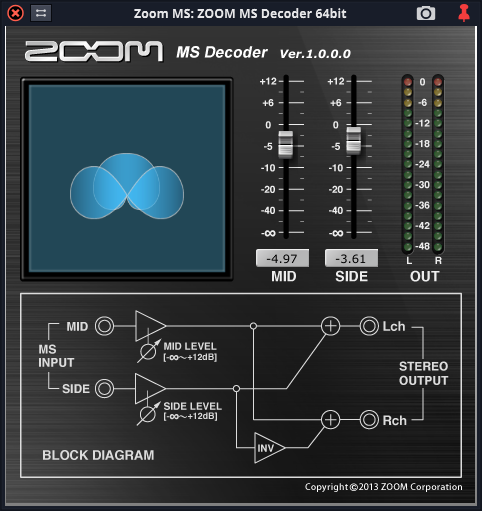 If I apply the decoder to any mono track sort of the same happens as far as I can hear. So I reckon that's some sort of pre-pan imaging placement whatever...?

If encoding a stereo track that wasn't recorded RAW am I in effect only gain adjusting the signal at the S angle it was recorded...?

Sorry if vague, I'll try to experiment a bit more but the tech explainers on the matter misses my narrow bandwidth in this case.

Happy 5+ years H2n btw, just discovered that the S mics give nice ambience options to anything captured from the XY side.

I don't really understand your question. However, I can explain Mid-side encoding.

We normally think about, and listen to, Left-Right stereo where the two signal channels are used to carry information relating to the left half and the right half, respectively, of the stereo image.

In the Mid-Side format, the two channels are used instead to carry what is effectively the summed mono signal (Mid) and whatever is going on around both the edges (Side). This Side signal is slightly more complicated in that stuff on the left side is encoded in the same polarity as the Mid signal, while stuff on the right is encoded in the opposite polarity.

It is possible to convert between Left-Right and Mid-Side in either direction by using a simple matrix process, which is most easily done these days using a dedicated plugin in a DAW, but it can also be done with some nifty signal routing around a mixing console or via dedicated hardware matrix units (which are sometimes built into audio recorders and stereo mixer channels, and other devices).

While in the (raw) MS format, the stereo image width (or the equivalent stereo recording angle) can be adjusted by changing the level of the Side signal relative to the Mid signal... And by introducing EQ into the Mid and/or Side signal, that width adjustment can be made frequency-selective, if desired, too.

I'm mostly confused about the MS mic operation on the Zoom, MS-raw vs. MS with S at a fixed angle. Audible difference between the two, not sure what I'm hearing though.

My understanding is MS-raw being the whole S range which then can be adjusted in mix with the S gain in a decoder.

If that's true then I'd expect a S track recorded at a fixed angle, say 100 degrees, is just gained up or down in the decoder. It nevertheless sounds like the angle is shifting from narrow to wide when adjusted upwards with S gain in the decoder. The same gain range for the S of a MS-raw track is more subtle.

I'll try and share a brief demo if the video gods are willing.

FMajor7add9 wrote:I'm mostly confused about the MS mic operation on the Zoom, MS-raw vs. MS with S at a fixed angle. Audible difference between the two, not sure what I'm hearing though.

I've not used the machine and only read the section of manual you posted... But it appears to me that the MS-RAW mode records the native Mid and Sides signals, whereas the MS angle mode uses the same MS mic array but with a fixed preset relationship between the Mid and Side signal levels to provide a predetermined stereo image width (stereo recording angle).

Thanks again Hugh, testing here clarified that MS-raw separates M and S much more crispy if you will. MS-raw with S channel boosted sounds great for acoustic guitar finger picking light strumming, more so than from a channel with S values fixed 90 degrees (-6dB) and outwards.

The backwards thing remains great also, facing the XY side of the device while capturing the MS track as well with S at 150 degrees, then ditch the M channel in post, quite a nice blend. And nice move from Zoom to keep updating the drivers and adding this 4 channel option along the way.

I'll try to route M and S to separate FX busses next for separate processing.

MS-raw will give you the most options if you're going to process further. It's worth knowing that :

Thanks,
is that equivalent to recording the two mono channels to two tracks, then copy the S track to a third track, flip it and pan them L and R?

Otherwise plan A is to send a copy from the MS stereo track to two FX busses where a MS decoder subtracts M and S respectively.

The S bus processing would be the same on both sides then, haven't pondered the options for separate processing of them until now. Delay on the left S only f.ex.

FMajor7add9 wrote:is that equivalent to recording the two mono channels to two tracks, then copy the S track to a third track, flip it and pan them L and R?

Yes. To decoder MS to LR, the Mid and Sides tracks both have to feed the left and right mix buses in particular ways, as denoted in the simple equations given above.

So the Mid track needs to feed both Left and Right at equal levels and in the same polarity. That is achieved simply by setting the pan control in the middle.

The Sides track needs to feed the Left mix bus in the same polarity, but the right mix bus in the opposite polarity. That is often achieved by splitting the Sides Track, and panning one hard left. The other is panned hard right but with a polarity inversion. When altering the relative level of Side channel -- to alter the stereo image width -- these two Sides channels MUST be adjusted equally and identically!

There are other ways of achieving essentially the same thing on physical consoles and.or in DAW mixers... but in all honesty its far easier and more convenient these days to use a dedicated plugin for the purpose. Most DAWs have something suitable as a stock plugin, or failing that Voxengo's MSED plugin is free and very easy to use.

The S bus processing would be the same on both sides then, haven't pondered the options for separate processing of them until now. Delay on the left S only f.ex.

You can process the Sides signal (as a whole) differently to the Mid signal if you want, however, and the best way to do that is back at the source where you have the raw Mid and Sides signal tracks, before they enter into the decoder routing.