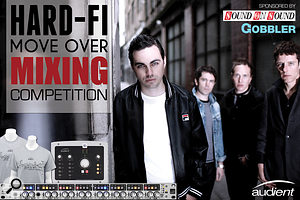 The good folks over at Audient have teamed up with Gobbler, two-time MPG Mix Engineer of the Year Cenzo Townshend (Florence + the Machine, Bloc Party, Thirty Seconds to Mars) and us at SOS to give you a chance to mix Hard-Fi’s track ‘Move Over’.

Submit your mixes and remixes between June 19th and August 18th, and you could win an Audient prize bundle worth £1300. The bundle comprises an ASP880 eight-channel mic pre and A-D converter, as well as the iD22 USB audio interface and monitor controller which we reviewed in January 2014 (http://sosm.ag/audient-id22). Two runners up will win a year’s subscription to Sound On Sound and an Audient ‘Teaboy’ T-shirt. Gobbler are also offering a free four-month 100GB account when you download the stems, so get yourself involved!

Once you’ve submitted your entry, the public decide which mixes they like the most. The 25 mixes with the most ‘likes’ on Soundcloud will make it through to a final judging stage, so get sharing and tell your friends to vote!

The judging panel will be made up of Hard-Fi, Audient, SOS, Gobbler and Cenzo Townshend, and between us we will select the overall winner and the two runners up.

When you’re crafting your mix, get creative, be yourself, and make sure it sounds great! Enter the competition on Audient’s web site (http://sosm.ag/hardficomp) then get your friends to vote for your track on the Soundcloud group (http://sosm.ag/mixcompsoundcloud).

Find out more about the track's development and the competition from Hard-Fi frontman Richard Archer.