Focusrite have announced an agreement with Audient that, in a surprising turn, will see the latter company’s ASP2802 hybrid mixer/control surface being re-branded as a Focusrite product. Not only that, Focusrite will also be manufacturing, marketing and distributing this innovative desk, which will from now on be known as the Focusrite Control 2802 (you can read about it in our December 2010 review, here. 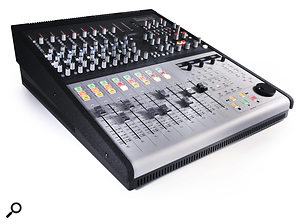 Of this unexpected move, Focusrite Chairman and MD Phil Dudderidge has said: “Audient’s design values reflect our own. We have been fortunate to build a head of steam over the past few years that enables us to address global demand levels. This agreement works well for both companies.”

It’s probably fair to say that few people could have seen this coming, but it starts to make more sense when you explore the link between Phil Dudderidge and Audient’s Technical Director, David Dearden. The two have worked together since the ‘70s, and both played an important role in the success of Soundcraft in the studio console market. Dearden, who co-founded Audient, was the man behind DDA consoles, while Focusrite, of course, produced one of the world’s most revered large-format consoles, the Forté — so both parties have an undeniable pedigree in the 2802’s intended market.

There’s little else to say about the newly re-branded 2802 — there’s no mention of any changes to its design, so it appears to be exactly the same product in all but name. The press release ends with this quote from Phil Dudderidge: “We look forward to offering more products, co-developed by our respective engineering and product marketing teams.”