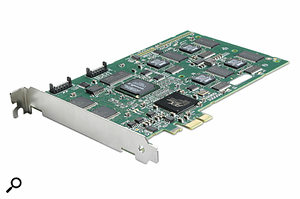 So far, we've seen the Duende Classic and the Duende Mini, which are rackmountable and desktop versions of the platform respectively, but Duende PCIe is the first SSL product to put their DSP inside the computer.

As its name suggests, Duende PCIe is a PCIe version of the product, which means it is fitted to a spare expansion card slot inside the host computer, rather than being connected externally via Firewire. It has the same processing power as the Duende Classic (the original rackmountable device) and can process up to 32 channels of plug-ins at sample rates of up to 96kHz.

It ships with SSL's EQ and Dynamics plug-in and the Duende Stereo Bus Compressor. Additional plug-ins, such as Drumstrip, X-EQ and X-Comp, are available at extra cost. In the UK, the Duende PCIe will cost just over £700.

Check out the video below, and head to SSL's web site for more information: