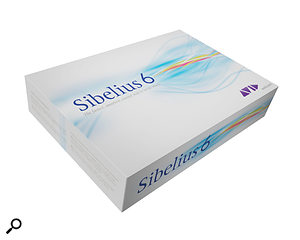 Sibelius Software have announced the details of version 6 of their eponymous score-writing software. As you’d expect, they’ve drawn on the resources of other companies within the Avid group to add new functionality, but the main focus has been on streamlining the process of producing professional music notation.

To this end, the headline feature is something Sibelius call Magnetic Layout, the idea of which is to greatly reduce the need for the manual ‘tidying up’ of completed scores which can be so tedious. Switching on Magnetic Layout causes each element of score furniture to intelligently ‘repel’ those around it in such a way as to eliminate clashes and overlaps, whilst retaining those all-important positional links with the music itself. The rules by which it works can be configured to suit your own preferences, and it can be applied or over-ridden on an item-by-item basis.  Magnetic Layout is joined by a number of smaller improvements which will please music engravers, most notably a radical overhaul of the way slurs and ties are managed.

If you’ve used a typical word processor or DTP package, you’ll know how useful version tracking can be, and it’s now been added to Sibelius, providing a great way of seeing what’s changed in your score or reverting back when things go a bit wrong. You can Compare two versions of the same score and Sibelius will automatically list and highlight all the differences.

Sibelius’ guitarist-oriented sister program G7 is now officially discontinued, but the floating fretboard note entry screen has now been added to Sibelius itself. Perhaps more notable for guitarists is a complete revamp of the way the program handles chord symbols and diagrams: every conceivable notation convention is now supported, and there are lots of new options for entering chord data and choosing how it should be displayed. 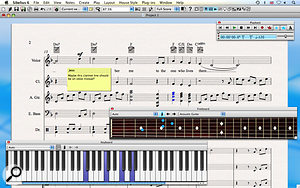 Previous versions of Sibelius used a version of NI’s Kontakt Player to handle audio playback. This has now been displaced by a custom-designed sample-playback instrument based on the technology used in Digidesign’s Structure sampler, which is designed to present your score in the best possible light without requiring a lot of work from the user. Sibelius 6 can also be a ReWire client, allowing you to channel its audio output directly into compatible hosts such as Pro Tools. And an especially neat new playback option is Live Tempo, which provides a clever way of allowing the user to ‘conduct’ the score in real time by tapping on a MIDI or QWERTY keyboard. And if you’re on the road without a MIDI keyboard, you can now ‘play’ directly into Sibelius from the computer’s keyboard.

Sibelius 6 should be available by the time you read this, and will of course be reviewed in SOS as soon as we can lay our hands on a copy. Sam Inglis.