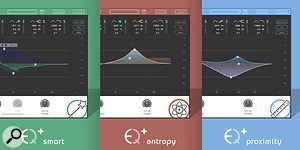 Smart EQ+ is a so-called 'self-learning’ equaliser has intelligent filters that automatically analyse audio material, identify spectral imbalances, and suggest a custom-made filter curve within seconds. Used vice versa it can strengthen and highlight the individual character of particular instruments, say its makers. The smart:EQ+ comes with speech and music modes.

Proximity:EQ+ is designed to distinguish direct sound from echoes and can be added on at any frequency range. Sonible claim that this makes it possible to seamlessly manipulate room acoustics even after recording is complete, accentuating the contours of some sounds while de-emphasizing and making others fade into the background. Allegedly, less-than-ideal room acoustics can thus be balanced even in finished recordings. If it works, the proximity:EQ+  has the potential to not only be a practical tool for sound editing, but also a powerful plug-in for any sound designer.

Finally, entropy:EQ+ has the capacity to differentiate between harmonic and inharmonic sound portions, substantially simplifying things like the postproduction of transients. Frequency-selective manipulation makes it possible to only edit the strokes of individual instruments within a track, say Sonible. This functionality is designed to work miracles not only with complex instrumental tracks but also with recordings of human voices, meaning  consonants can be raised in an instant, considerably improving the intelligibility of speech in both vocal recordings and interviews.

Each EQ costs €129 and all are available now.