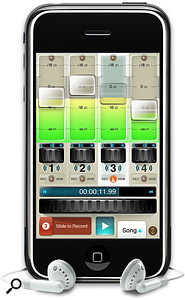 Not so long ago, we wouldn't blame you for thinking that this was an April Fool. A recording studio on your mobile telephone — a prank, surely! Over recent years, a few such products have made it to market, but this is one of the first on the iPhone.

Sonoma Wireworks have released FourTrack, a application for Apple’s iPhone that lets you record and synchronise up to four tracks of audio, without any additional equipment.

It’s being billed by the manufacturers as a practise tool for guitarists and the like, but we think it goes a little further than that.

A lot can be done with four tracks, and using the application’s GUI, users can start laying down tracks very simply. Just arm a track, slide the Record control, and away you go. In post production, the level of each track can be altered, as can its position in the stereo field, and a compressor/limiter can be used to “automatically fatten the sound of the output mix”. What’s more, your recordings, as 16-bit/44.1kHz data files, can be sent to a wi-fi enabled computer for further editing!

One potential limitation is in the way the signals get into the iPhone in the first place. FourTrack uses the iPhone’s in-built microphone to capture sounds, although third-party headsets can be used. Of course, these are designed to optimise the intelligibility of speech, so may provide questionable results. But for just $9.99/£5.99 at the iPhone Appstore, it’s surely worth a try!