SSL will be at the upcoming AES show in San Francisco to show off their brand-new integrated DAW controller and audio interface. The Nucleus features two banks of eight motorized, touch-sensitive faders for controlling your sequencer, as well as 16 rotary encoders (one above each fader), and Cut, Solo and Select buttons (again, one of each above each fader). There’s also a transport control section, with a jog-dial for scrubbing and shuttling, and a host of buttons to aid DAW navigation, including shift, bank and arrow keys. 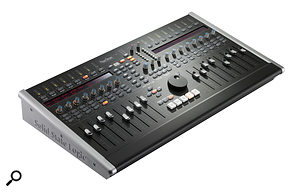 Above the rotaries are two LCD scribble strips, which display the parameters you’re adjusting, and their values. The Nucleus uses an Ethernet port to transmit data to and from your DAW, either as plain old MIDI CC numbers, or via the Mackie MCU or HUI protocols. It can also switch between up to three different DAWs, in a similar way to the Euphonix Artist Series controllers, and SSL say that it is compatible with pretty much every major sequencer (including Pro Tools, Logic and Cubase). There are eight 10-segment LED level meters that display DAW channel levels, plus a host of user-definable buttons, including some that emulate USB keyboard keystrokes (a USB port facilitates this), for assigning to your favourite DAW shortcuts. An included configuration utility, called SSL Logictivity, allows you to create, store and recall all your custom control presets. You can also save profiles to an SD card, thanks to the Nucleus’s built-in memory card slot.

Integration the name of the game here, and in that spirit, the Nucleus also incorporates a two-in, two-out USB audio interface. The inputs are derived from either the mic/line/instrument inputs, or a S/PDIF socket (for recording digital signals), while the outputs are meant for monitoring a stereo mix from your DAW.

All of which sounds promising already, but the SSL Nucleus also has an analogue side — a SuperAnalogue side, in fact, as it uses some of the same circuitry as can be found in SSL’s Duality and AWS mixers. A monitor control section sits above the jog-dial, and this comprises a monitor level control, a headphone level knob (for the two headphone outputs), left-mono and right-mono sum buttons (which can be used at the same time for simple mono fold-down listening), and source selection, for monitoring either the stereo return from your DAW, or the Nucleus’s stereo analogue input. There are two mic preamps built in, and these can provide a very healthy 75dB of gain. Each pre features a pad, an 80Hz high-pass filter, a phantom power switch, a Hi-Z switch (for use with instrument-level signals), a polarity invert switch, and an insert switch for engaging or bypassing the mic pre insert points (these can also be switched so that they sit across the stereo DAW return signal, for mix bus processing). A Wet/Dry blend knob mixes the mic signals in with the DAW return, for zero-latency monitoring while tracking. Next to the preamp gain controls are a pair of 10-segment LED meters, which by default display the DAW return level, but can also be set to show mic input levels.

But that’s not all: SSL are also kindly giving away the Duende Native Essentials plug-in bundle with every Nucleus sold. The bundle is a collection of plug-ins identical to those available for SSL’s Duende DSP system, but that run entirely on your CPU and don’t require any extra hardware to run. Included with the Nucleus are the SSL Channel EQ & Dynamics plug-in, and the Stereo Bus Compressor.

So with the Nucleus, you’ll be able to record through a pair of SSL preamps, get the SSL console sound in the box (thanks to the included Duende Native plug-ins), and mix with the tactile feel of a high-quality control surface. “Yes, but how much does it cost?” I hear you ask. Well, the whole caboodle weighs in at a very reasonable £3525, including VAT, and should be shipping by the time you read this.