If you're a fan of classic echo units but prefer to work 'in the box', developers V-Plugs may have just the answer. Echo Trip is a Windows-only VST plug-in that uses advanced physical modelling techniques to emulate the sounds of various hardware echo machines including the Space Echo, Echoplex, Oil Can and Memory Man among others. 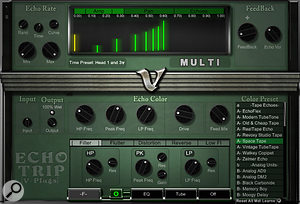 Each nuance of the original hardware has apparently been carefully learned and implemented, including all the quirks and artefacts generated by its tape path, tubes, and mechanics, so that Echo Trip offers an authentic analogue sound and 'feel'.

For those who want to push the boundaries, you can also create a wide variety of your own echo sounds and effects, using three different timing modes, plenty of sound shaping tools and modulation paths. Unusual real-time effects are possible using the Integrated Midi learn function, while separate control over the timing and sound of the echos let you first perfect the desired repeat pattern and then choose and tweak one of the 50 'colour' presets or build a new echo sound from scratch.

With support for sample rates up to 192kHz, echo ducking to help the effects blend with your mix, and shuffle and accent controls to help you set the groove, Echo Trip is certainly versatile. It's priced at 99 Euros. Martin Walker

Top 10 Boring Things That Are Really Important In The Studio
6 days 5 hours ago.