Waldorf will build the Valkyrie synth and call it Kyra 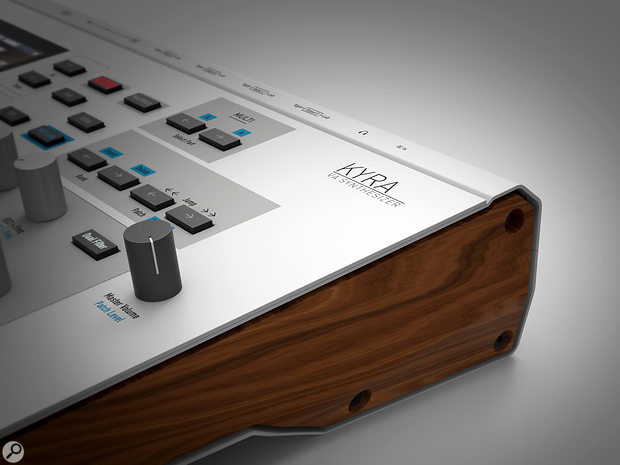 The Valkyrie 128-voice, 10-oscillator virtual analogue synthesizer that we reported on at Musikmesse earlier this year has found a design, manufacturing and distribution partner in Waldorf Music. It will be launched at Winter NAMM in desktop/rackmount form in January 2019 at a price of 1899 Euros. A keyboard version will follow later in 2019.

Watch our demo of the Valkyrie and interview with designer Manuel Caballero at the recent Musikmesse show in Frankfurt, here:

As far as effects go, Kyra comes highly specified — each of its eight parts will feature a three-band EQ with sweepable mid, dual tube-style limiters, formant filter, distortion, six-stage phaser, stereo digital delay, comb/flanger/chorus/doubler and a programmable reverb. All effects units on all parts can be used simultaneously and run at Kyra’s native 96kHz sample rate.

Connecting Kyra into your system should pose no problem, with the synthesizer boasting four assignable, balanced stereo analogue outputs (converted from 32-bit/96kHz), a headphone output, low-latency 5-pin DIN MIDI, a fully class-compliant USB 2 implementation for MIDI, and a stereo 24-bit/96kHz audio stream for each of its eight parts. Production-wise, there is also a USB audio return feature, so Kyra can render final DAW audio using the Windows ASIO protocol. An ASIO driver is provided for Windows users while Mac support is out of the box.

“After nearly four years in the making, I went to Musikmesse with the intention of finding an established partner for Valkyrie,” explains the synth’s designer, Manuel Caballero. "There's little doubt that Valkyrie's reveal at Musikmesse caused quite a stir in the synthesizer world and I had set the bar high for potential partners to bring the instrument to market. As a result of this, I'm pleased to announce a partnership with Waldorf Music. Few companies can match their track record of innovation and delivery spanning several decades. Working with Joachim Flor and his technical and design team to achieve this is an exciting and efficient partnership as we work together to launch the instrument at NAMM in 2019. Waldorf's proven heritage in product design, manufacturing, and distribution leaves me to do what I do best, which is applying the most advanced technologies to the art of music, and I look forward to a continued deep working relationship with the Waldorf team.”

We look forward to seeing the results of the partnership next year.