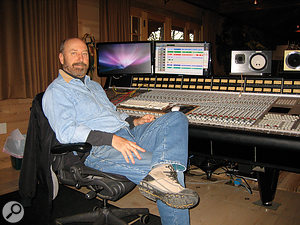 On the first day of Born In The USA sessions all was far from well, as Scott explains: "nothing came together... the sound was just a mish-mash.” Determined that this experience would not be repeated on day two, he therefore re‑analysed the main studio area for musician/instrument placement, including that of E Street Band drummer Max Weinberg. Utilising the drum‑miking setup that Scott had perfected with Jeff Porcaro, Weinberg enjoyed a bigger sound courtesy of Neumann U87 room mics that were on huge boom stands at the far end of the room, pointing up towards the ceiling.

"Neil [Dorfsman]'s recording of the room mics had been one of my problems when I mixed The River,” Scott explains. "There was so much cymbal in those room mics, I had to recreate the room by using the Clover studio and piping some of the drums back out over speakers into the studio to have them reverberate around, while also using reverb units. On the other hand, for Born In The USA I was somehow able to find a spot where the cymbals were at an even volume with the tom‑toms and things like that, so you merely got the effect of a room.”

While bassist Garry Tallent was in the main room with Max Weinberg and recorded with a DI and an amp miked with an Electro‑Voice RE20, saxophonist/percussionist Clarence Clemons was in the lounge, looking through the porthole of the studio loading door so that he could see Tallent and Weinberg, as well as Bruce Springsteen who sang and played his guitars in an iso booth to the right of the control room, adjacent to the mic closet. Steve Van Zandt was in his own booth to the right of the control room, and both his and Springsteen's guitar amps were in another booth across from the control room on the right‑hand side. Keyboardist Danny Federici, meanwhile, played his Hammond B3 through a Leslie. This was miked with a Neumann U87 on the top speaker and an RE20 on the bottom in a booth directly across from the control room on the left‑hand side, separated by a divider from yet another booth which housed Roy Bittan, who played the grand piano as well as a Yamaha CS80.

The Words Are The Song

"The entire E Street Band played live,” says Toby Scott. "Bruce sang into a U87, and while he may have redone his vocal, as a general rule he has always been very confident. He just sings his part and that's it, and usually the only reason we will do a second take is if he wants to impart a different inflection, sing with a fuller voice, whisper something a little bit more or change the words. After I'd started out recording him with a U87, he used a U67 for a little while because it was fuller and smoother. However, it was not quite as clear, and so I then miked him with a dual‑capsule Sanken CU41.

"As far as I'm concerned, the words are the song, so I want to hear them. Bruce is the most eloquent guy that I know, but his enunciation isn't always the greatest, so I try to do everything I can to make it really easy to hear his words clearly. The CU41 was really clear, and he used that up until about four years ago when he spotted a Telefunken [ELAM] 251 next to his mic in the studio. I go back and forth, recording both Bruce and his wife [singer‑songwriter Patti Scialfa], and back in the late '90s, after we'd experimented with several microphones, she decided that the 251 was the one that she loved. So, I found one and bought it for her, and I used to have both that and the CU41 sitting side-by-side in the little vocal area of their home studio setup. Well, one day Bruce asked what the mic was, and when I told him it was Patti's he asked, 'Why don't you use it on me?' I said, 'Because the one I'm using on you sounds fine.' He said, 'Can we try it?' I said, 'Sure,' and he said, 'OK, just open a track and I'll experiment.'

"You have to understand, Bruce and I hardly ever experiment. I pick the microphone that, in my estimation, is the one that will work, and I also have a philosophy that I don't want to waste an artist's time while I figure out how to do my job. However, in this case Bruce sang into the CU41 and into the Telefunken, and in the end he pointed to the 251 and said, 'Gee, I kind of like it. Can I use this one?' I said, 'Sure,' he said, 'OK,' and that certainly simplified my life. I now use the same microphone and the same chain for him and his wife. Since I'm not a close‑miking person, I usually start Bruce off at least six inches from the mic, with a windscreen about an inch or two in front of it. Then, for his acoustic guitar, I use an AKG 460, whereas back in 1982 I would have used a 451.” 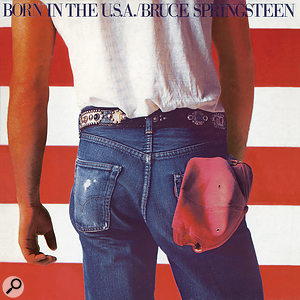 "The tape machine in the Power Station's Studio A was a Studer A80, the console was a 44‑input Neve 8048, and that facility must have had around 10 reverbs. One of them was a five‑storey stairway that had been blocked off, where you could move the microphones and speakers up and down. Then there was the Ladies' Room, formerly the ladies' bathroom, which was an all‑tiled room that they used for very good drum reverb. Additionally, they had about five EMT 140 stereo plates, along with a Scandinavian knock‑off of the 140.

"The assistant there told me, 'We have this other plate, but it's broken.' I said, 'What's wrong with it?' and he said, 'The motor on the decay adjust is shot.' I said, 'Let's hear it,' and so he plugged it in, I ran a drum into it, and the decay boomed and rattled and kept on going for about three or four seconds. When I was told it was broken and nobody wanted to use it, I said, 'Perfect, I'll take it! Put my name on it for the duration of this project!' I wanted stuff that nobody else was going to screw with.

"You know, if you've got an EMT plate it's real critical, especially in a mix, and I would just dump every instrument on a tape full‑on into the reverb unit, into an EMT plate, so it was reverberating like mad. Then I would adjust the decay time on the plate, and I'd stop every so often to hear how stuff sounded, tuning it so that the decay time and the tempo of the song sort of correlated. After a few minutes you could actually listen to it and go, 'Well, jeez, it doesn't sound that bad,' even though all of the echo knobs were fully turned up on everything. If you get it to the point where a ton of echo is almost believable, you can then pare it down to a normal level and it'll just blend in so that you won't even realise there is echo on anything. However, that takes time and I didn't want to do that every night. So, when I tried the knock‑off plate I said, 'I'll use that. Just patch it in and don't even fix it.'

"I took the output of that plate and ran it through what at that time was the only gate, a Kepex. I set the Kepex for an external input of the bottom snare mic and I set it to close in about a second. Then, I fed the top snare drum mic into that reverb unit — it was the only thing that went in there — and that created the explosive snare drum sound that you hear on the album. A combination of Max hitting the snare, the physical sound of the drum, the room mics from the Power Station and then this four‑second plate reverb created this really tremendous drum sound, and the first song we recorded with that was 'Born In The USA'.”

For his part, Toby Scott was able to understand Springsteen's modus operandi when the latter explained that, were he to teach the musicians a song from beginning to end, they'd immediately know all the chord changes as they transitioned from one section to another, probably resulting in contrived licks and less spontaneity. What he wanted to capture were those moments of inspiration that might emerge during the early takes, and such was the case with 'Born In The USA'. After explaining the structure, Springsteen went to his booth and set the tempo while his fellow musicians played through their parts. Then, once everybody was ready, Scott rolled tape and take one was recorded.

"I was in the control room, listening through my Yamaha NS10s at a reasonable volume, and then Chuck asked me to put it up through the big speakers,” Scott recalls. "So, that's what I did, and I remember listening to it and going, 'Wow!' Right from the start, the snare drum was exploding, and you have to remember this was 1982, when we were in the middle of disco‑land there in New York. There were no exploding snare drums in New York — there were no exploding snare drums anywhere — and then, what with Danny's synthesizer playing that grand intro, the song was just cracking away and I turned to Chuck Plotkin and Jon Landau and said, 'I don't know whether it's Bruce, but man, it sounds good to me!' They agreed.

"I'd gotten a good cue mix for everybody, so they all could hear it, and the takes were like 10 minutes long. On the final cut there's a rather long ride‑out, but it was even longer and we cut it down by three or four minutes. The band just kept playing. There were eight takes of the song, take six was the master — thanks to Max perfecting his bass-drum pattern — and when the band members came into the control room after the first couple of takes and heard the track, they too were going, 'My God, we've never heard anything like this before!' It was totally, revolutionarily different-sounding to anything else at that time.”