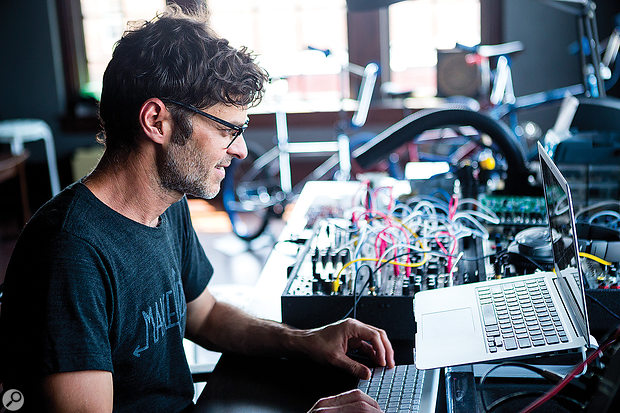 Tony Rolando: “For me, the goal is to create highly functional modules which are inspiring to use and have potential to grow with the user."Photo: Rodent

According to its founder, Tony Rolando, synth module-maker Make Noise was initially inspired by the desire to fill out the Doepfer product line with some odd circuits. “This was what I saw Scott Jaeger from Harvestman (aka Industrial Music Electronics) doing with his Malgorithm module and it was exciting to find the missing circuits and attempt to innovate within the framework of the Doepfer A-100 system. Initially I had no interest in developing a complete system, because I already had a Doepfer A-100.

“But understand I also had absolutely no business plan. No employees. No stock. Very little capital. I simply ordered 20 printed circuit boards and the components required, built them by hand into working modules, and sold them and used that money to buy the PCBs and components for 40, built them by hand into working modules... wash, rinse, repeat... that was my life for nearly five years. I lived on top of a lonely mountain in a tiny town of fewer than 700 people. My whole life was Make Noise. These odd disjointed circuits I was building gradually developed into a complete system. I saw this and moved to develop the remaining circuits to make the Make Noise modules function as a complete instrument. Shortly after that I worked with my friend Surachai to produce the Shared System Series of records with artist Richard Devine, Alessandro Cortini, Robert AA Lowe, Keith Fullerton Whitman and Surachai. Once we made those records people began to see how the Make Noise instrument, odd as it looked, was a powerful system.”

Asked whether new modules are driven by an underlying philosophy and how the balance between ease of use and functionality is achieved, Tony replies, “It is simple to make a module with dense functionality. It is simple to make an easy module with limited functionality. For me the goal is to create highly functional modules which are inspiring to use and have potential to grow with the user. Not necessarily easy, but inspiring, and the hope is that through that inspiration people become motivated to learn the deeper functionality and they could operate the module in a more complex way if they should desire to do so.”

Moving on to a few specifics, I was curious whether Tony would admit to having any favourite creations. “I’m fully committed to analogue,” says Tony, “and thus the DPO remains my favourite module we’ve ever made. That said, I am very proud of the René and Erbe-Verb modules because I feel they represent our affinity for innovation within the modular system while maintaining what I believe is the true spirit of modular synthesis, which is that no one module is the focus. Instead, all modules are incorporated into a system where they communicate with each other to achieve a great, complex result that is impossible by other means.”

Which led me to wonder about the process of deciding which module should be next. Tony explains, “We try to work on the ideas that are exciting us the most at any given time. I’m usually running at least three development projects at once. They all move at different paces. This way when one project slows I have other projects heating up and I jump on to the hottest one.”

I suggest that, in such a vibrant market, it must be tough to keep tabs on the competition. Tony nods, “Five, six years ago I tried to own key modules from all the manufacturers. I built a massive mixed system that I used for beta testing and development. But at a certain point the Eurorack market grew to the point of being impossible to completely follow.”

Rounding off with a spot of mischief, I aired the accusation often levelled against modulars, particularly Eurorack, that there’s a ‘modular sound’. Tony was keen to take this on: “I think the modular sound has less to do with timbre and more to do with the fact that when people are patching a modular, they seem to be less interested in micro-management as a music-making process. The extreme magnification of musical event time and pitch provided by modern DAWs seems to curate what people believe to be perfect music through the aid of a machine.

“Music made with the modular system is, in my opinion, a pure and interesting collaboration between human and machine. It displays well the beauty and the blemish in both (human and machine) and allows for the process of collaboration between the two to be more visually represented to the spectator. This makes it more interesting because we as listeners are invited to view more of the process and details. It might be less perfect by judgement of mainstream music taste, but perhaps more exciting to those of us seeking a deeper connection to the music.”