Making Music On The Move
By Mark Wherry & Tom Flint

When Apple announced and subsequently released their eponymous watch, I was pretty sceptical about the device. Here was something that seemed expensive, under–powered — both computationally and in terms of battery life — and, frankly, unnecessary. Given my penchant for technology, friends were surprised when I said I wasn’t going to buy one; I had no interest in it, and, besides, I’ve never worn a watch. No, I was absolutely not going to buy an Apple Watch. So, of course, I bought an Apple Watch.

Built with the precision you’d expect from Apple, there’s something seductively attractive in the design of the Watch. It might be more computer than chronometer, but that suits me just fine. There are two physical controls: the so–called Digital Crown, and the side button that gives you quick access to your friends. The Digital Crown offers a variety of application–specific behaviours, such as scrolling and zooming, and pushing it displays the various apps installed on the Watch. The Watch’s face is, of course, a touchscreen and features a technology called Force Touch that lets you touch the screen normally to perform one action, while pressing it a little harder will perform another.

Internally, the Watch is powered by Apple’s custom S1 SiP (System–in–Package), which features a customised ARM core along with — according to various reports — 512MB memory and 8GB of flash storage. A particularly interesting component is the so–called Taptic Engine that makes the watch pulse in such a way that it feels almost as though someone is tapping your wrist; this is primarily used for notifications. The Watch felt fairly snappy when navigating its core functionality, though performance definitely gets a little sluggish when loading third–party apps.

The Watch is supplied with a USB charger that magnetically attaches itself to the back of the device. You might be able to squeeze two days out of the battery if you use the Watch purely as a watch, but generally I found myself charging it nightly. On the plus side, the Watch does seem to charge quickly.

The three pages of Apogee’s Metarecorder running on an Apple Watch let you control the core functionality of the app running on your iPhone. The red line indicates the app is recording.In order to use the Watch you’ll need to own at least an iPhone 5 running iOS 8.2 or later. The Watch communicates with the iPhone via Bluetooth — it has no independent Internet access of its own — and the first thing you need to do when setting up the Watch is to pair it with your iPhone. Since iOS 8.2 Apple have included a Watch app, and this is very much the command centre for configuring and updating the device, as well as deciding which apps you want to install. Watch apps live within traditional iOS apps, and any app installed on your phone that contains a Watch component will be listed in the iOS Watch app. If you tap an app entry, there’s a switch to deploy it to your Watch.

The initial batch of third–party apps were limited in terms of functionality because the first version of Apple’s watchOS didn’t allow these apps to access the native features of the Watch, such as the Taptic Engine, the speaker and microphone, or even the Digital Crown. However, this didn’t prevent developers from coming up with some interesting ideas. Apogee’s MetaRecorder was one of the best early apps I saw, allowing you to remote control certain features of the iPhone app. Launching the watch app causes MetaRecorder to automatically load on the iPhone, and then, via three pages of controls, you can play or record the current take, add markers, and even see a peak level meter with input gain adjustment. The iPhone is doing the actual recording, of course, but I thought this was a pretty neat example of turning your iPhone into a remote microphone of sorts.

Most of the early Watch apps fell into this ‘remote control’ category. Line 6 were quick to add a support to their AMPLIFi Remote app, making it possible to tune your guitar, access tones, and control levels from your Watch. iZotope also included a simple Watch app in their recently released Spire that puts a four–track recorder with a great interface in your pocket. There was also a fair number of (frankly terrible) metronome apps that were pretty useless since all they could do was control a metronome running on your phone, and a number of slightly more useful tap tempo apps.

With the release of watchOS 2 last September, developers can finally create native apps for the watch. This has meant the appearance of slightly better metronome apps, such as the awkwardly named WatchHapticMetronome, which take advantage of the Taptic Engine — when the metronome is running, you feel the beat pulsing on your wrist. It works surprisingly well, although is hampered by another current limitation of watchOS: native apps go to sleep after around 20 seconds if you’re not interacting with them. Having a metronome stop after a brief time isn’t ideal, but these are early days and Apple are already working to improve battery life with the watchOS 2.0.1 update, released just as I was finishing this article.

The Apple Watch is undoubtedly a luxury. It’s nice to have, but you absolutely don’t need it, and there are no killer apps as yet that would make me recommend the purchase. That being said, if you do already own one, there are some neat things you can do with it, and given the rich ecosystem of music and audio–related iOS apps, it’s not impossible that the usefulness of the Watch in this field will evolve over time. Watch this space! Mark Wherry

Bandlab is a product that encourages collaborative music making between people in different locations by providing tools for recording ideas and a social network within which ideas can be shared. All that is recorded using the app is stored in the cloud where it can be heard and potentially added to by others, and everyone is encouraged to share their work in all stages of its development. The app also makes it easy for like–minded musicians to form bands. 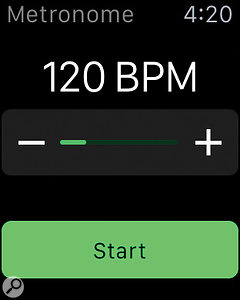 It doesn’t get simpler than this: WatchHapticMetronome beats time using the Taptic Engine.To begin using the app it’s first necessary to set up an account, and this can be done by creating a profile or signing up with pre–existing Google+ or Facebook accounts. I went with Google+ and was slightly unnerved to see the app instantly source my profile picture and display it along with my name at the top of the opening page! This first page has counters showing how many people or bands you are following, how many are following you and how many plays you’ve had so far. There’s also a Setting page where profile details can be expanded and another where the user can track their own recent activity and that of the people they are following. It’s similar to things like Twitter and Google+.

The app is set up so that recording an idea in its most basic form can be done in the blink of an eye. For example, touching the microphone button that appears in the bottom section of the main page launches a new idea page where there is a prompt to write some notes, plus another mic button which immediately starts recording audio when touched. If the idea is something worth keeping it can be given a name and saved, and will thereafter appear in an Ideas folder that also lives on the opening page. At this level, the app functions as a handy notepad.

To take things a little further, the user has to create a song, but the option to do this appears only after something has been recorded. From there on it’s possible to record along with the first idea and then save the result as a Revision. It’s unclear where these revisions can be found, but it seems like each new revision replaces the previous one.

For proper multitrack recording the user must head one level deeper into the app by clicking the Pro Mode option that only becomes available on the Create Song page. Doing so opens the Mix Editor, which is something that looks like a very basic DAW multitrack display. Crazily, there’s no way to get straight to the Mix Editor from the first page.

BandLab’s main page. Each new take made within the Mix Editor is assigned its own track channel with level attenuation and mute and solo options. It’s pretty simple to delete a track or drag the audio from one place to another, and there are undo and redo options amongst the transport controls.

Helpfully, the Mix Editor’s tools include a metronome with tempo, time-signature and count–in adjustments, but for some reason the metronome is not available when laying down the initial recording, so it’s sometimes necessary to start off recording a throwaway part just to access the Mix Editor and its metronome.

Touching on a clip brings up an editing panel with options to Cut, Copy, Slice, Loop and Delete. If Loop is selected the option to Sample appears, but there is nothing to explain what happens to the sample! I should mention at this point that the app currently has no help menus or manual and is pretty minimal in terms of information. 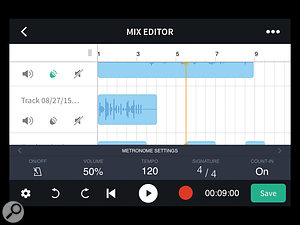 BandLab’s Mix Editor page. Building a composition in the Mix Editor is straightforward enough, however, one major problem I found was that after leaving the mixer and returning to the initial menu page, where the mix can be listened to, my tracks had slipped out of sync! No doubt these bugs will be ironed out in the near future, but it’s clear that there is work to be done on the multitracker.

Overall, I’m not sure what to make of Bandlab, which seems to combine social networking, cloud storage and recording tools into something that is a bit back–to–front in some ways. I can’t help wondering if it isn’t better to record using a dedicated bit of software and then import the finished mix. Still, Rome wasn’t built in a day, so perhaps this is the start of something special.

For those willing to take the plunge, one thing worth doing before beginning a collaboration is check out the Terms Of Service notes, as there are all sorts of copyright issues to consider when creating a shared composition! Tom Flint