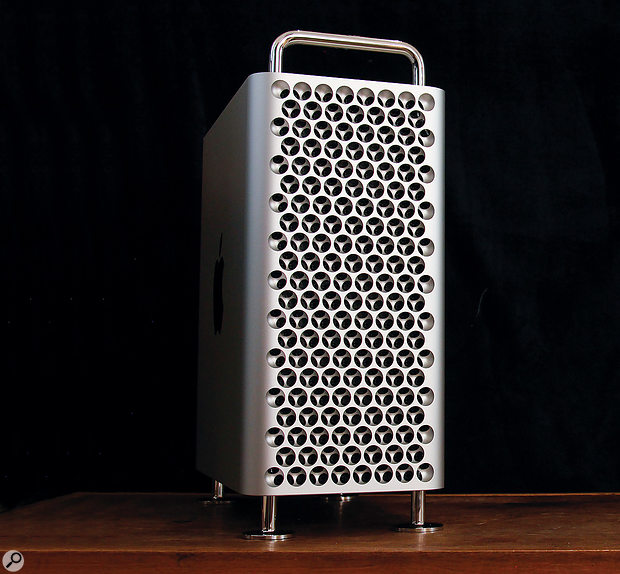 Have Apple finally delivered the professional desktop system Mac-based musicians and audio engineers have been waiting for?

About three years ago, Apple disclosed that they were working on a new Mac Pro. It would be a rethink that offered a modular architecture, acknowledging that there are many types of professional workflow with differing requirements. And, to this end, it would also be adaptable, allowing Apple to maintain the state-of-the-art with more frequent updates that could incorporate the latest components.

As long-time followers of Apple will know, such a discussion concerning unannounced products is highly unusual; but this was something of a highly unusual situation for the company and their flagship Mac product. Four years earlier, in 2013, professionals had been clamouring for a new Mac Pro. The then-current model hadn't been upgraded in years, had a decade-old chassis, and the growing discontent compelled Apple into giving a 'sneak peek' of a new, redesigned Mac Pro for the 2010s.

Jaws dropped as Apple took the lid off a shiny black cylinder, followed by a good deal of head-scratching after the realisation there was no longer any internal expansion underneath the lid. And when it was released later that year, this new Mac Pro quickly became dubbed the 'trash can'. It was not a success, particularly amongst musicians and audio engineers, who would have been happier had Apple simply offered a better-specified system with additional slots. Worse still, Apple had engineered themselves into a thermal corner by opting to use dual GPUs as standard, creating a system that not even the company itself could upgrade.

The results of Apple's rethink of the Mac Pro were finally announced during the Worldwide Developer's Conference (WWDC) keynote on the 3rd June, 2019, and the new Mac Pro became available around six months later, on the 10th December, shipping in time for Christmas.

The 2019 Mac Pro introduces the first new 'pro' desktop Mac enclosure since 2013. There was the translucent 'blue and white' G3 Power Mac case in 1999; this turned grey with the introduction of G4 later that year, and evolved through to the final 'wind tunnel' G4 Power Macs with Mirrored Drive Doors. These were replaced by the long-serving 'cheese grater' design, used from 2003 until 2013 in G5 Power Macs and the original Mac Pros, which was followed by the now-infamous 'trash can' (2013-2019). In other words, aside from some internal modifications along the way, there have only been four distinct enclosures in the Mac Pro line-up over the last 20 years — so it was important for Apple to get this part of the design right, as it's likely this new enclosure will be with us for most of the next decade.

Available in two configurations, the new Mac Pro is offered as either a traditional tower, or, for an additional £500$500, a rackmountable frame. This is arguably a long-overdue option and is obviously going to be welcomed by Mac-based musicians and audio engineers, who are used to installing equipment in racks and, in many professional situations, in separate machine rooms. Apple previously sold rackmountable Macs between 2002 and 2010, although, as the name suggests, the machines in the Xserve range were designed and sold to be servers; since they were delivered in 1U cases unable to accommodate most audio-oriented expansion cards, they weren't ideal for musical purposes. 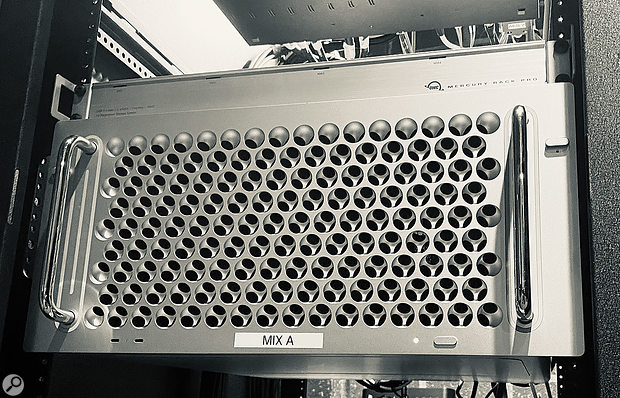 The Mac Pro is available in a rackmountable frame — no hacksaw required.

Like the Xserve, the rackmountable Mac Pro is supplied with rails that can be installed without tools into a square-holed compatible rack with both front and rear fixtures, not just any old instrument rack you might be more accustomed to in a studio setting. You may also need help from a second person when placing the Mac Pro into the rails, mostly due to the weight of the system — a not exactly feather-light 38.8 pounds17.6kg. But, once fitted, the rails do allow the Mac Pro to easily slide in and out of the rack, making it easy to access the internals.

Given that the tower is even heavier, weighing 39.7 pounds18kg, Apple have added an option to make it more easily manoeuvrable: wheels! For an additional £360$400 (and about an inch of extra height) you can order this frame with wheels instead of feet, and although this is absurdly expensive, it might reduce some back-related injuries if you need to regularly use the Mac Pro in multiple locations. Unlike the rack frame, which must be ordered that way, the wheels for the tower can be added later, but according to Apple this procedure must be carried out via their support department or an authorised service provider.

The new Mac Pro has a vaguely retro-futuristic look. It's the kind of thing that wouldn't seem out of place on a Ken Adam set in a '60s science fiction film. While the frame of the Mac Pro is stainless steel, the housing enclosure itself is aluminium, and the lattice-patterned, three-dimensional vents (machined both internally and externally) are more than just aesthetically pleasing. The new Mac Pro has a 1.4 kilowatt power supply, and the large surface area of the vents is part of an impressive cooling system that uses three axial fans at the front coupled with a blower at the back to enable 300 cubic feet of airflow per minute. This doesn't result in whisper-quiet operation, but the Mac Pro is remarkably audibly unobtrusive, all things considered.

Arguably one of the most contentious decisions Apple made with the previous Mac Pro concerned expansion, favouring an external future via then-nascent Thunderbolt ports over the internal slots to which users and manufacturers were more accustomed. This was a big gamble, and while Apple are known for such premature and bold speculations on the future, this was a bet the company ultimately lost. Because, although Thunderbolt has been adopted more widely in the intervening years, there is no getting away from the fact that many audio professionals rely on PCI Express cards and hate using an external chassis.

It was therefore a great relief at the unveiling of the new Mac Pro to see that Apple had stopped thinking outside of the box when it came to expansion, deciding to once again innovate inside the box instead. The new Mac Pro includes eight PCIe slots, representing one of the biggest architectural changes in the engineering of this new system.

There are four double-wide slots, three single-wide slots, and a half-length slot that comes populated with an I/O card offering two Thunderbolt 3 ports, two USB-A ports and a 3.5mm audio jack. The I/O card can only be used in slot number eight, which has x4 lanes, but is user-replaceable and doesn't actually have to be present at all, since the Mac Pro offers two additional Thunderbolt 3 ports (on the front of the Mac Pro rack or the top of the tower) that can be used with all manner of hubs and so on to provide standard I/O should you need the slot for something else. 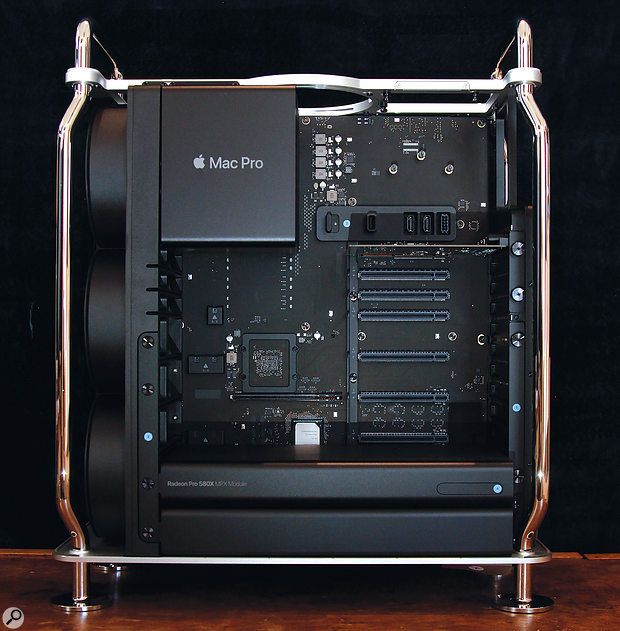 You want slots? You got slots...

The first four (double-wide) slots use x16 lanes, except for the second slot, which has x8 lanes. Slots one and three feature so-called Mac Pro Expansion (MPX) connectors for hosting special MPX Modules, and each MPX Module can draw up to 500 Watts of power — which is more than the maximum continuous power of the previous generation Mac Pro, incidentally. The cooling for these Modules is handled by the...