Controlling In The Deep

Although control surfaces may not ‘add’ to your sound, they can certainly make working with audio an easier and more pleasant experience. But with so many different models on offer, it pays to read up on them before you commit your hard-earned money.

There’s probably a greater choice of hardware devices for controlling audio software than there has ever been, and the argument for tactile control over sound manipulation — like we used to have in the ‘hardware days’ — remains as convincing as ever. But many people go through several such devices before settling on one that they really get on with, and some people decide, having spent a small fortune, that they were better off with the mouse and keyboard they had in the first place! So how do you avoid wasting time and money on finding the right controller for you?

The first, and perhaps most important, question you need to ask yourself is: what do I want to control? It may sound daft but, seriously, what aspects of your music production would be better served 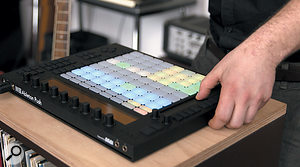 Ableton loop-jockeys have plenty of controllers to choose from, including Ableton’s own Push. by a rotary encoder or fader than by the mouse you already know well?

In many cases, the type of controller that would best suit you will be determined by the music you make and the software you use. If you’re an Ableton Live user, for example, and your primary modus operandi is the triggering and cessation of loops, then ‘button matrix’ style controllers would appear to be apt. Indeed, Ableton make their own controller, called the Push, for precisely this purpose (http://sosm.ag/mar13-push). Novation, too, make a range of controllers designed for Ableton — the Launchpad series — and many of them come in at rather appealing prices. They’ve also recently expanded the range to include some compact versions that are available in ‘normal’, keyboard-equipped or encoder-adorned flavours (http://sosm.ag/jan14novation). Finally, beat-production veterans Akai have the APC range, which has also newly gained ‘MkII’ status and, like Novation’s offerings, comes in various formats with keys, rotaries or sliders (http://sosm.ag/mar14-akai-apc).

We don’t all work with loops, however — or, indeed, in Ableton Live — and for many, the appeal of a controller isn’t that it allows you to trigger umpteen sounds with all umpteen fingers, but rather to achieve tactile control of a mix, including faders, EQ settings, compression and so on. For such traditional functions, a more traditional-looking controller is called for. The ‘classic’, in this regard, is the Mackie Control range, which is now very mature and carries the ubiquitous ‘Pro’ suffix (http://sosm.ag/apr08-mackie-control). Another option is Avid’s Artist series (http://sosm.ag/jan09-avid-mc). These use the Eucon protocol rather than the Mackie Control ‘language’, and offer probably the best form of affordable mix control for Pro Tools. Other DAWs also accommodate Eucon, so the Artist controllers are an option for users of Cubase, Digital Performer and Sonar, too.

Further up the food chain, Focusrite’s Control 2802 (http://sosm.ag/dec10-focusrite-2802), and the SSL Nucleus (http://sosm.ag/jun11-ssl-nucleus) combine advanced DAW control features with monitor control, preamps and more. Slate Digital’s innovative Raven MTX (http://sosm.ag/may13raven) and MTi, meanwhile, use touchscreen technology rather than conventional moving faders. Beyond these options, you’re into remortgaging-the-house territory. If you do happen to have a five-figure sum of cash hiding under the mattress, however, you can check out our round-up of Rolls Royce DAW controllers at http://sosm.ag/nov13-spotlight. 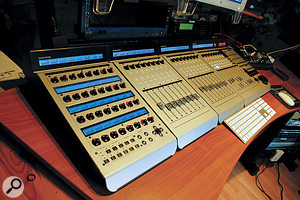 Mackie’s Control Pro series are a popular and established choice for those who miss the feel of a ‘real’ mixing console.One option that isn’t quite available yet but is worthy of note is Behringer’s upcoming X-Touch range of controllers. Like most Behringer products, they promise to be unfeasibly affordable, and if they’re anywhere near as successful as the BCF and BCR controllers (the spiritual ancestors of the X-Touch), then they’re likely to be remarkably successful. We got a sneaky preview of the new controllers at NAMM earlier this year, a video of which can be seen at http://sosm.ag/namm14-xtouch.

In addition to the Ableton-specific controllers mentioned earlier, there are units designed to integrate with almost every other major DAW out there. Reason users, for example, might be drawn to Nektar’s Panorama range, which comes in keyboard or control-surface versions (http://sosm.ag/nov12-panoramap4 and http://sosm.ag/mar14-panoramap1, respectively). Although Nektar are expanding the Panoramas’ compatibility with other DAWs via firmware updates, their primary purpose is still to afford Reason users a profound level of tactile control. For those in the Cubase camp, there are the diminutive CMC controllers, which allow you to build up a surface in a piece-by-piece fashion according to your own needs (http://sosm.ag/jun12-cmc). Those of the Sonar persuasion, meanwhile, might want to investigate the imposing V-Studio 700 (http://sosm.ag/may09-vs700), which aside from its motorised-fader goodness features one of those video-fader things that looks like the thrust control from a jet engine.

Finally, Softube’s Console 1 (http://sosm.ag/jun14console1) is a combined hardware controller and software channel strip plug-in that is designed to supersede your DAW’s own mixer channels rather than controlling the DAW itself.

Of course, no music-technology product round-up would be complete these days without mentioning Apple’s supremely shiny slabs of joy. The apps available for the iPad are huge in number and very varied indeed. In fact, almost every ‘genre’ of hardware controller has been immortalised in app form, from Mackie Control derivatives like DAW Control, DAW Remote HD and V Control (all of which you can read about at http://sosm.ag/apr14-live-tech) to apps for triggering loops in Ableton (http://sosm.ag/nov11-live-tech). 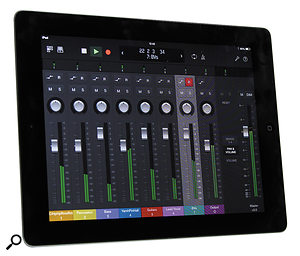 If you already have an Apple iPad, then you’ll have access to a plethora of DAW control apps, many of which cost little more than a postage stamp.Not all DAW controller apps are based on existing hardware, however: some developers have taken advantage of the relatively new iOS platform to create weird and wonderful control apps that can output MIDI and OSC in most unusual ways — of which the best example is probably the Liine Lemur app. Based on Jazzmutant’s (now-discontinued) hardware controller of the same name, this allows you to create custom controllers that not only perform the functions of faders and sliders, but that can also generate LFOs and envelopes, and are capable of outputting several control messages of different types at the same time. To learn more about it, check out http://sosm.ag/sep12-appworks.

As you can see, there’s an enormous number of different ways to get hands-on with your music software, and if you own an iPad already then you could feasibly move away from your mouse and keyboard after spending just a few poundsdollars at Apple’s App Store. If you feel you need a dedicated hardware box, however, the investment will be rather more substantial, and that’s where it pays to do some serious research before splashing your cash.