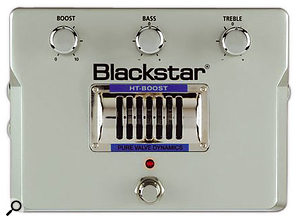 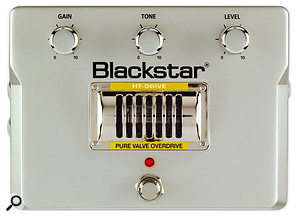 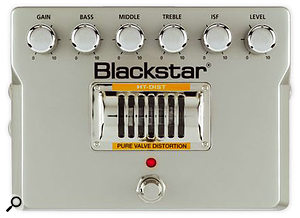 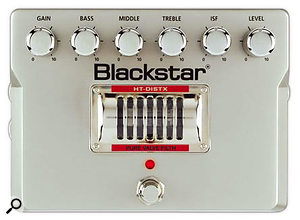 The Black Star HT range comprises five pedals. Above from top are the HT Boost, HT Drive, HT Dist and Dist X. The HT Dual is pictured opposite.Blackstar Amplification are a UK company set up by a number of ex-Marshall designers. Their first products, reviewed here, are pedals — but the company name provides clues as to their future plans.

I looked at five of their HT range of pedals. Unlike many other stomp boxes that incorporate tubes, these all use the full 300V HT supply, which ensures that the tubes run correctly: they're not just there to provide an orange marketing glow! The main signal path is all-tube, though additional buffering and switching components are used to ensure noise-free switching, and to provide a high-quality buffered bypass mode that enables the pedal to drive long cables.

All the pedals are suitable for use on stage and in the studio, and power comes from an included 16V AC adaptor. Internal circuitry converts this to the necessary voltages to run the tubes and other components.

Despite the high spec, the most expensive of these pedals is a modest £129 in the UK, the cheapest being £89 — prices that are made possible by designing in the UK but manufacturing in Korea.

The simplest of the pedals is the HT Boost, which is designed to act like two extra cascaded preamp tube stages (from one dual-triode tube), boosting your signal and keeping the tube tone intact. It features Treble and Bass tone controls, a Boost control and a bypass footswitch. Like other pedals in the range, it is ruggedly built in a chunky but stylish cast-alloy case with knurled metal knobs and an input jack on the right-hand side. This particular model has two outputs, designated High and Low, to suit both tube and solid-state amplifiers. An LED shows when the pedal is active, and a grille in the centre of the case that allows warm air to escape means you're able to see the tube.

The HT Drive, which offers something a bit more extreme, also has dual, cascaded triode stages, and a tonal range from gentle boost to tube-saturation distortion. Blackstone's A-Class tone control cuts out high end fizziness without dulling the part of the sound you want to keep, and for recording there's also a speaker-emulated output jack, as well as the normal 'to amp' output. The controls will be familiar to anyone who has used a distortion pedal before, namely Gain (drive), Level and Tone. This pedal is actually very versatile, as it ranges from almost clean at one end of the scale to full-on rock overdrive at the other, while the tone control is nicely subtle and very usable (unlike the controls found on many other pedals).

A little further up the scale is the HT Dist, which is an overdrive/distortion pedal with a novel tone-control network that sweeps between a US and UK rock guitar sound. Blackstar call this their Infinite Shape Feature, or ISF. Again, the overdrive is all tube (both stages of an ECC83 dual triode) and there's a speaker output for recording or for feeding into a PA system. The idea is that the pedal responds like a tube amp, so you can control the amount of distortion by backing off your guitar's volume control. This model breaks away from the 'three knobs and a switch' tradition by also including a full bass/middle/treble passive EQ section along with the ISF tone knob. Gain and Level set the amount of distortion and adjust the output level respectively. You could think of it as similar in concept to an HT Drive but with the extra tone controls.

If 'more' isn't enough, the 'filth monster' of the range is the HT DistX, which can go from mild overdrive to contemporary US-shred, and this again has an emulated speaker output. Its enhanced passive tone controls incorporate the same Infinite Shape Feature and its layout is essentially identical to that of the HT Dist, to which it is also tonally similar, except that there's more drive gain available.

The HT Dual, as its name implies, is a dual-channel pedal designed to put more tonal options under foot. Channel one handles either Clean or Crunch modes, and so can be used for clean boost or for creating moderate overdrive. Channel two offers higher gain and goes beyond crunch up to modern high-gain lead. Its switching operation essentially gives you a choice of three tones (including your amp's own clean sound). Again, there's that ISF tone control to sweep you between US and European rock sounds, and you still get the speaker emulation. There's both a three-band EQ and dual-concentric drive control and output level knobs (for the two channels). Gain 1 also has an associated button switch to set the sound to clean or crunch.

A slightly unusual switching system is employed, with separate footswitches for each channel rather than one switch for bypass and one for channel changing, but some clever logic-switching circuitry makes this very intuitive. If one channel is active and you hit the other, the channel switches to the one you just hit. If, on the other hand, a channel LED is on and you hit the same switch, the light goes out and the unit goes into bypass mode (and vice versa), so you can always get the choice you need with a single switch click.

These pedals all sound very musical and have a great dynamic response, just like a real tube amp, which means you can turn down your guitar's volume control to clean up the sound, even when you're using quite heavy distortion.

To work out what they sound like you really needn't look much further than the HT Dual, which is capable of duplicating pretty much all the effects available from any of the other pedals. Channel one is much like the HT Boost in clean mode, and not unlike the more polite end of the HT Drive when you switch to Crunch mode — making it useful for blues or rock/indie rhythm. The main difference is that the HT Dual also has the full four-knob tone-control setup (the tone controls affect both channels, by the way), so there's more flexibility for tailoring your sounds. Channel two of this pedal even gets you into HT Dist and HT DistX territory. Let's have a look at the different sounds available from the rest of this range. 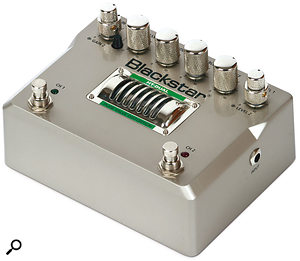 The top of this Blackstar range is the versatile HT Dual, which allows you to choose between two separate tube channels as well as the clean (bypassed) signal. As with other HT pedals, it usefully includes a speaker-emulated output.The 'Boost' in HT Boost is exactly what its name implies: the signal gets louder, allowing you to overdrive the input stage of your own amp, so the distortion characteristic you hear depends very much on how your amp behaves. There's a useful degree of tonal control on the HT Boost pedal (courtesy of the Treble and Bass knobs) but the HT Dual is rather more flexible.

The more polite of the overdrive pedals, HT Dist, gets you into blues and classic rock overdrive in a very controllable and convincing way, and working your way up the distortion ladder eventually gets you to the HT DistX, which isn't as savage as its name might lead you to believe. At lower settings it manages a well-behaved crunch, while at halfway up you find yourself in classic rock territory, and with full gain you're ready to shred — but the thing still doesn't run out of control. Those pedals that have three-band EQ behave much like the passive three-band EQ sections you'll find on many tube amps, but the ISF knob is interesting, as it interacts with the more conventional tone controls to change the character of the sound in a way that seems to particularly affect the mid-range. With the ISF control fully clockwise you get that very focused, slightly edgy sound characteristic of US rock, while at the other extreme the sound has a 'spongier' low end and a warmer high end, with plenty of mid-range harmonic squeal. By experimenting with the EQ and the ISF knob, you can coax a lot of classic tones from the box, including some very Tube-Screamer-esque sounds. I tried both single-coil and humbucking guitars and the character of each still comes across nicely, even when you pile on the gain.

The speaker-emulated output makes a fair stab at replicating the coloration of a speaker, and it takes the unwanted fizz out of the high end without making the sound appear dull or lacking in bite. Clearly, it isn't as sophisticated as some of the digital modelling solutions out there, but if you're recording with it there's always the opportunity to add more processing later if you need it. It certainly stands up well in comparison with other stomp-sized speaker emulators and is a very welcome addition.

The whole range sounds really good and I'm looking forward to trying one or two of the pedals on stage — but with one caveat: external PSUs are no problem when used with a pedalboard, but if the pedals are used separately, the PSU lead can get knocked or dragged out , and as the bypassed output is electrically buffered you lose all signal when the PSU is disconnected, even if you're in bypass.

That issue aside, the sound of these pedals is very natural, with excellent dynamic response, and tone controls that give you plenty of usable range without straying into dull or useless fizz territory. Though it may seem subtle at first, the ISF control is very useful for tuning the character of the sound, and the more you use the mid-range control, the more effect it seems to have. There's enough range to go from UK scoop to US modern metal, but I like the way those in-between blues tones are handled. I was also pleasantly surprised by the low noise-floor, even at relatively high-gain settings, and the emulated speaker output is a useful bonus for recording. Best of all, though, is the price —which is lower than that of many solid-state pedals — so be sure to check them out! Paul White

This is a great, versatile series of pedals, ranging from the clean HT Boost up to the hugely flexible HT Dual. They have excellent dynamic control — so you can almost forget the bypass and just use your guitar's volume control to bring the distortion in and out. 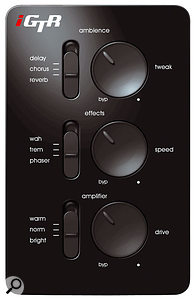 Waves have expanded their hardware range for guitarists with the iGTR, a palm-sized guitar effects processor. It's designed to be used anywhere and is powered by batteries, making it highly portable. Connectivity includes a quarter-inch jack input for connecting a guitar, and two mini-jack outputs for headphones, although Waves say that the second output can be used to send a feed to a recorder (or DAW), an amplifier, or a second pair of headphones. There's also an Aux input, so you can plug in an MP3 player and jam along to your favourite tracks.

Knobs and switches on the front panel allow you to select and adjust reverb, delay, chorus, wah-wah, tremolo and phaser, as well as the tone of the amplifier-modelling circuit. The iGTR is available now, priced at £69 including VAT.