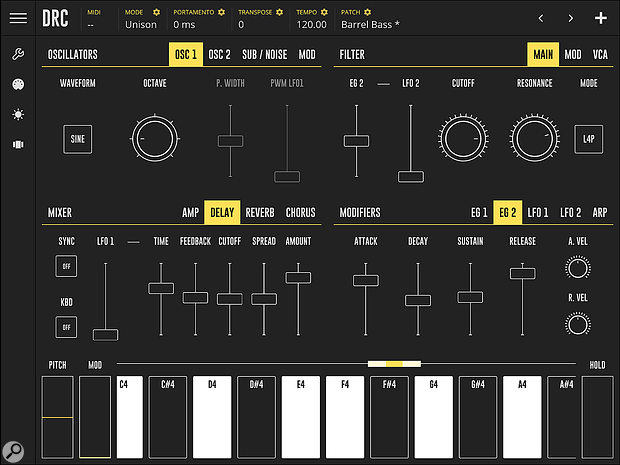 You can choose a keyboard interface (or MIDI input) or chords, complete with strum bars.

Imaginando’s DRC is a polyphonic synthesizer available in multiple formats, which becomes of more interest when you realise it incorporates cloud storage of its patches. Sounds you create on the bus using either an iOS or Android device can therefore be waiting for you in the studio at home with none of that messy exporting, emailing or simply wishing iOS had a better file system. At the moment this innovation assumes you’re using the VST version; if you’re a Logic user, you’ll have to wait a little while longer for the AU release.

This plain-looking app has a choice of foreground colours set against a dark grey background. All the controls have enough space to accommodate even the fattest fingers, but the downside is that the interface requires tabs — lots of them — to access each oscillator, LFO, envelope, effect and so on. This is not one of those instruments that will reveal everything at a glance. Unusually, you’re given a choice of either a regular keyboard (complete with over 20 scales, including a user scale) or a set of chord buttons. These are reminiscent of the Suzuki Omnichord, even down to the division into major, minor and seventh chords and the strum pads at either side. Strum pads are a lot of fun and would have benefited from an even longer strum area. 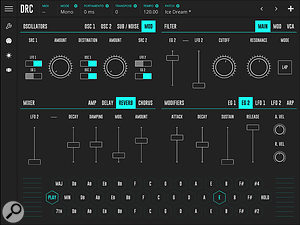 The interface has almost enough tabs for a weekend at Glastonbury.DRC is a virtual analogue synthesizer that takes its analogue modelling seriously. Its envelopes behave as if they have capacitors that are charged through resistors; in fact the name DRC means Digital Resistor Capacitor, so you should never forget this particular detail. With up to eight voices, each with two oscillators, a ring modulator, sub oscillator and noise, DRC is a beefy and versatile subtractive synth. Even its sub oscillator is fitted with a wide selection of waveforms and its noise has variable bandwidth — you can have it brown if you like! The filter section includes a beefy four-pole low-pass, plus a two-pole multimode design (low-pass, band-pass, high-pass and notch), all of which sound fine. My only criticism is that, while the buttons used to step through filter modes or oscillator waveforms may look neat and minimal, they aren’t the ideal way to quickly pick one choice from a list.

The factory sounds feature a cross-section of analogue favourites and a few surprises too. The patch ‘Silk String’ is rich, expansive and highly playable, plus there are an assortment of stonking basses you’ll be happy to use. Sound effects are not left out either and, of these, ‘ZX Spectrum’ provides a spookily close rendition of a cassette disgorging its data. The effects lend a splash of extra character throughout, in particular the reverb with its suggestions of the cold, hard surfaces of large concrete spaces or industrial units. The stereo tape-delay simulation features clock sync and LFO modulation, the latter capable of some crazy, shimmering effects. If you have a pad that needs fuzzing out, the stereo chorus isn’t bad, although I could have done without the audible clicks present when it’s turned on or off.

While it lacks a memorable name or gratuitously rendered graphics to shout ‘here I am’, the DRC polyphonic synthesizer makes up for its low-key nature with a clear interface, decent-sounding effects and those preset chords and strum bars. It’s compatible with Audiobus and Ableton Link, but could be most notable for its multiple platform identity. As a Logic user I wasn’t able to test this functionality, but the cloud synchronisation of patches is sure to be a worthwhile workflow enhancer. It’s true that the market isn’t exactly devoid of affordable analogue-style synths, but fortunately you can try before you buy — the download is fully functional for seven days, which should be plenty of time to decide whether DRC is for you.