Following the success of The Orchestra, that all-in-one Kontakt orchestral sample library driven by a powerful, multi-layered engine featuring sequencers, modulators and effects, Sonuscore have taken that engine, given it a shot of steroids and put it to use in a different context. Ladies and gentlemen, I give you Elysion, the 'hybrid twin' that does for synthetic sounds what The Orchestra does for, well, the orchestra. 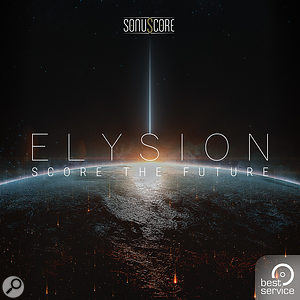 Elysion's core library is dedicated to sampled synthetic sounds. It's hard to guess many of the original sound sources — presumably numerous synths were involved, and possibly some specially processed acoustic sounds — indeed, the ubiquitous Felt Piano is among those on offer. Sonuscore say they have been hand-curated and treated like acoustic instruments, with up to five dynamic layers and three round robins. The samples fall into three categories: Sustained, Hits (one-shot samples) and Ambiance FX, each category being sub-divided into Soft and Hard tonal variations.

Following in The Orchestra's footsteps, the Elysion Engine features five layers, or slots, into which sounds are loaded from the core library. These can be played au naturel, or given rhythmic and dynamic animation using tempo-sync'ed Arpeggiators and Envelopes — not the ADSR kind, but looping dynamic curves that morph between dynamic layers using any shape you care to draw with the mouse. Unlike The Orchestra, whose five layers share the same three Arpeggiators and two Envelopes between them, all five of Elysion's layers are kitted out with their own independent Arpeggiator or Envelope. Functionally there are a couple of differences to those in The Orchestra; Elysion's Arpeggiator Swing amount is global, rather than per Arpeggiator, and the Envelopes feature an additional 'stutter' mode — that omnipresent trope of trance and EDM. The Arpeggiators in particular are very powerful — it's worth checking out the review of The Orchestra in the December 2017 issue for a detailed description.

Elysion naturally comes with a huge collection of presets; Sonuscore have chosen to follow Gustav Holst's example, naming them after the planets of the solar system. There are three preset categories: Spheres — conventionally playable Hits and Pads with subtle use of Arpeggiators and Envelopes to provide movement; Pulses — these layered sounds push the Arpeggiators and stuttering Envelopes to the fore, providing demonstratively rhythmical chordal textures in a variety of time divisions and time signatures; and Animated — Elysion's star turn, these use the Arpeggiators and Envelopes to their full potential, with rhythms, evolving pads and melodies all working together to create complex arrangements that sound complete in their own right.

The planetary naming convention groups presets by their general mood, again perhaps inspired by Holst's interpretations. Mercury (the winged messenger), for example, inhabits the more tinkly, lighter spectrum; Venus (the bringer of peace) is more relaxed and dreamlike. Mars (the bringer of war), as you'd expect, provides the more aggressive, driving moods. You may not agree with all of Sonuscore's planetary associations, but as with all such things you have to call them something! All presets offer global dynamic control either via CC1, CC2 or CC11, affecting the velocities of Arpeggiator notes, the intensity of the Envelopes' dynamic morphing, and numerous other parameters that can be optionally assignable to Motion control. Additionally, every knob and slider on the GUI can be assigned to any MIDI controller — the possibilities for freestyle control are virtually endless.

...the entire contents of an Elysion performance, including all its internal control data, can be dragged and dropped to your DAW as multiple MIDI tracks, where the facility to route these to any other instruments in your VST or hardware arsenal offers infinite sonic scope.

Further engine enhancements include independent effects for each layer: basic Attack and Decay (AD) envelopes, three-band EQ, Modulation (chorus, flanger or phaser), Saturation and Filter. Each Filter offers a choice of resonant low-pass, band-pass or high-pass; the type of each is fixed — the low-pass is a two-pole SV type, for example. It would have been nice to have access to the full range of Kontakt's filters, however, owners of the full version of Kontakt can delve into the (unlocked) edit menu and make modifications. Since each layer is routed to its own instrument bus that contains its associated effects, it's easy enough to identify the filter in question and swap it for your chosen type. Be careful not to overwrite the Elysion NKI, though, as any change you make will persist when you reload the instrument! Also new to Elysion are two Pan Engines, each offering up to 64 steps in a variety of time bases, both being assignable to any combination of layers to provide further movement.

As with The Orchestra, the entire contents of an Elysion performance, including all its internal control data, can be dragged and dropped to your DAW as multiple MIDI tracks, where the facility to route these to any other instruments in your VST or hardware arsenal offers infinite sonic scope, and renders any wish that you could import your own samples into Elysion redundant.

A few wish-list items come to mind — most importantly, sustain pedal support. Without it, it's currently impossible to play two-handed chords and simultaneously operate the mod wheel, not to mention being awkward to make radical chord changes while keeping a smooth flow going. Sonuscore recently added sustain pedal support to The Orchestra, so hopefully Elysion will follow suit. The stutter Envelopes and Pan Engines could include a smoothing parameter (lag time in Kontakt speak) to soften the edges between abrupt changes in value. The GUI would also benefit from being in the large Kontakt format, giving better visibility (small text on a dark background can be hard to read for us old codgers) and a larger, more controllable, palette for drawing Envelope curves. I was going to say 'comfortable', but that's too reminiscent of elasticated trouser waistbands.

All niggles aside, whether you program from scratch or make use of the many inspirational presets, Elysion delivers both as the main meat and vegetables of a composition or simply as the seasoning on top. Sonuscore have come up with a crackingly good companion to The Orchestra, and one that is certain to feature prominently in many chart hits, games, and film and TV scores to come.