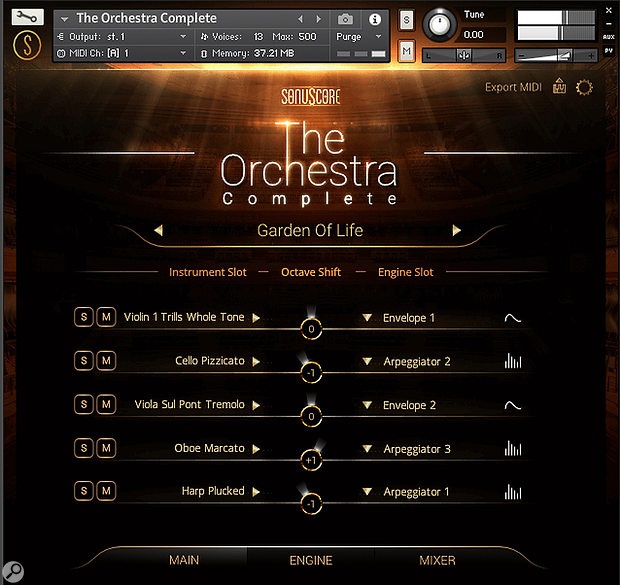 The sound palette available to TOC's Engine is now expanded with the Strings Of Winter content, along with the Timpani and Tubular Bells.

Sonuscore bundle an awful lot of orchestra into a very modest amount of disk space to deliver immense scoring power.

The original version of Sonuscore's The Orchestra (henceforth referred to as TO) is a self-contained Kontakt package incorporating all the orchestral sections in a surprisingly compact 6GB footprint; it was reviewed in SOS December 2017. Despite its relatively small size, the instruments of each section come with a selection of the most essential articulations commonly needed in performance. It notably shies away from the typical silky Hollywood sound, having a raw edge that might divide opinion, but which I personally feel adds to its usefulness and charm. 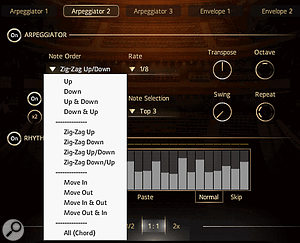 The three arpeggiators boast an impressive spec, with customisable patterns generating either whole chords or any of 12 motion shapes, with swing, octave range, transpose and the ability to restrict the pattern to act on specific groups of notes in a chord.As I said in my original review, the instruments' individual articulations also serve a greater purpose — the ingeniously scripted 'Engine', which offers an intriguing alternative to phrase-based sample libraries. Rather than using fixed, pre-recorded phrases, the Engine combines three customisable arpeggiators and two dynamic hand-drawn loopable envelopes, assignable to up to five layers, each containing one articulation from any of TO's instrument sections. Evolving textures and complex, inspirational rhythmic accompaniments can be created, all conforming to what you play on the keyboard, with overall dynamics controlled by the mod wheel. For a full, in-depth description, the 2017 review is worth a read as it's fully relevant to The Orchestra Complete.

Baby It's Cold Outside

Strings Of Winter (henceforth SOW) is a 4.4GB separate product released simultaneously with The Orchestra Complete (henceforth TOC). Its concept is identical to TO, employing the same system of individual instrument patches, together with a 'Strings Of Winter' NKI instrument that hosts the same Engine as TO. As the name suggests, SOW is dedicated to string sounds, and in contrast to the full-bodied tone of TO, the sound here ventures into colder, more brittle tonalities, and introduces 60 new articulations.

In the Strings folder are five sub-folders for Violins 1, Violins 2, Violas, Celli and Basses; all five of these have matching sets of articulations. Icy wastelands and suspense are the main themes, with Sustain, Tremolo and Spiccato all played sul ponticello (on the bridge). The Sustains are appropriately played with no vibrato and, like the Tremolo, feature oodles of rosin noise, inspiring feelings of bleakness or stark beauty (depending on your frame of mind). We're treated to three flavours of Harmonics: Sustains, Tremolo and Marcato, the latter two being very useful variations not often found in sample libraries. Spiccato, a not-too-violent Bartok Pizzicato and a particularly sprightly Col Legno provide the short articulations, with Whole Tone and Half Tone Trills following up the rear. The Trills appear to be identical to those from the original TO. Curiously, Sonuscore elected not to record sul pont versions of these.

In the Strings FX folder are four patches comprising a collection of Crescendi, Falls, Hits and Risers in a variety of speeds and tonalities. These aleatoric effects are described as a 'bonus', but that rather undersells what is actually quite a generous and highly useable selection.

The Orchestra Complete's 'orchestra in a box' possesses immense firepower that may come to some as quite a surprise.

The 'Morin Khuur' folder brings a contrasting tonal colour to the table. The Morin Khuur is a traditional Mongolian instrument, sometimes referred to as the 'horsehead fiddle'. The instrument has two strings, a trapezoid wooden sound box, and due to its length (often over 1m) it's played nearly upright with the sound box in the musician's lap or between the their legs. The strings are traditionally made from horses' tail hairs, but can also be nylon. At the top of the neck is a scroll, usually carved into the form of a horse's head. The action is very high, enabling playing techniques such as placing fingers under a string to obtain various effects. The instrument is normally played solo, but here Sonuscore have sampled the 15‑piece Mongolian State Morin Khuur Ensemble, focusing on the Western orchestral style rather than replicating traditional solo playing techniques. High and Low Ensemble patches each provide five articulations: Staccato, Sustain non-vibrato, Sustain vibrato, Marcato and Flam Marcato — an interesting effect similar to Marcato but with an emphatic double grace-note flam at the start. The overall sound has a slightly rough edge, yet with a delicate, almost sordino quality to the Sustains that fits the 'winter' remit very well. I especially enjoyed the sombre quality of chords played in the mid/high range of the Low Ensemble's Sustain vibrato articulation.

One programming error that came to light was an excessively loud release sample layer in the High Ensemble's Sustain Non-vibrato. This can be adjusted in the full version of Kontakt 6 — I tracked it down to the mf release layer — but it does need correcting for the benefit of those using the Kontakt 6 Player.

Honey I Enlarged The Kids

The Orchestra Complete combines the entire sample content of TO and SOW into one convenient Kontakt package of around 10.8GB. Existing owners of either TO or SOW can upgrade to TOC at a cheaper price than buying its 'sister' library. TOC also offers the advantage of combining sounds from either library within a single instance of the TOC Engine, making them much easier to work with. One thing to bear in mind if you already own TO or SOW is that its sample content will be duplicated on your hard drive, since TOC installs everything into its own folder. So if you're still working on projects that use one of the separate products, don't delete that 'redundant' library until you're sure you no longer need it!

Amongst other enhancements, the readability and general clarity of the GUI has been improved; text appears brighter and sharper than before. Timpani and Tubular Bells can now be included in the Engine, which also introduces sustain pedal support, making changes between radically different chord shapes easier for those with less developed keyboard skills. Sonuscore have revisited some instruments in order to improve their sound, though they're not specific about where those changes lie. A Reverb Lock comes as a useful addition, preventing the reverb changing from its current setting when changing presets.

Over 100 new presets have been added to the original ones from TO, many of them showcasing sounds from both TO and SOW in a single preset, as do the 60 new Multis. Some Multis contain as many as four instances of the Engine, no doubt breaking the rules of sensible orchestration, and whilst they demonstrate the extremes you can achieve with TOC, they occasionally confirm the principle of 'less is more' — that point beyond which things just get louder, but individual instrument detail is lost. That said, they do sound really good. 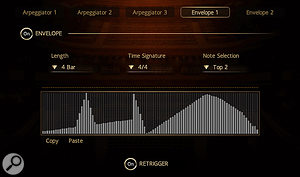 Envelopes' dynamic shapes, however bizarre, are reproduced faithfully when parts are exported to MIDI tracks.The most requested feature by users of TO has been the ability to export the MIDI data generated by the Rhythmic and Animated presets. This is now available in both TOC and SOW, opening up the possibility for unlimited tailoring of the generated parts to fit your music. The process is quite straightforward; TOC is constantly 'listening' to what you play, and recording it in the background. Having played something you like, you click the Export MIDI button at top right and drag it into your DAW.

If your Engine preset uses five layers, then five MIDI tracks and their associated parts are automatically generated, complete with any dynamic expression curves generated by the envelopes. You then have the option to assign those parts anywhere you like. If you want them to replicate the same sounds as used by the Engine, load up five further individual instrument patches containing the same articulations used in the Engine preset and assign them to their appropriate MIDI channels.

Now the parts are fully editable, you can change or delete notes, add new ones, rewrite their velocities and expression curves — anything you like. As individual instrument patches, they can also be routed to their own outputs and processed separately with your plug-ins of choice. Best of all, you can redirect the parts to play any other instrument you own, software or hardware. You can even copy parts to double with other instruments. As other instruments outside of TOC will respond differently to velocity and controller curves, there will inevitably be some adjustments needed to compensate, but that's to be expected.

The facility to export MIDI offers not only huge creative potential, but provides the solution to converting Engine-generated parts into intelligible scores for live musicians — copyists everywhere will be relieved. Although the depth of sampling detail may not match that of high-end libraries, the full complement of TOC's tonal colours and articulations puts up a good challenge to quite a few of them. Just playing the presets out of the box instantly triggers ideas, and despite its relatively small disk drive footprint, The Orchestra Complete's 'orchestra in a box' possesses immense firepower that may come to some as quite a surprise.

Phrase-based libraries such as Sonokinetic's Minimal, Tutti and Capriccio, Native Instruments' Action Strings and Emotive Strings offer authentic real-life performances, although limiting the user to the supplied content. The Orchestra Complete has no such limitations, its strength being the creation of original, custom-built patterns, phrases and instrument combinations that can be exported as MIDI files for more specific editing, and driving other instruments. As such it has no current equivalent.

Here we see two versions of the same exported performance. The top, muted track contains the original Engine performance, the first with no mod wheel movements, and the second with an added mod wheel curve. The five clips beneath contain the five exported parts. Velocities and dynamics curves generated by the Engine are visible. The left-hand clips show exactly what was exported from the unmodified preset; the right-hand clips show how additional mod-wheel movements interact with the velocities and dynamics.

Two issues arose in preparing this example; the Violin 1 whole-tone Trills part fails to end correctly, extending to an arbitrary point off-screen as can be seen with the right-hand clip. Secondly, when playing the source Engine preset, the Oboe Marcato's arpeggiator plays notes for their whole length. However, the exported MIDI part reduces them to short notes, as seen on the fifth track down. You could always lengthen them again, nevertheless I suspect both these issues are unintentional.

The Orchestra Complete offers an inspirational gold mine of driving rhythms and animated orchestral textures, editable by the user or created entirely from scratch. Export of Engine parts as MIDI files takes creative control to a whole new level, enabling the involvement of additional or alternative instruments outside of TOC. The individual instrument patches are perfectly useful in their own right, but it's when they're combined in the Engine that the ideas start to flow thick and fast.