Self-contained keyboard synths have an immediacy that is seldom matched by synth modules or software instruments. There's a great variety of them available at the moment, but how do you know which one is right for you? Here's a selection of the models we've looked at over the last couple of years, with links to the SOS reviews, to help you decide. Newly launched at the recent NAMM show, the MiniBrute is a genuine all-analogue monophonic synthesizer with an appropriately approachable set of controls. The MiniBrute can process external audio signals, and even doubles up as a MIDI controller, and you can read our exclusive review of it on page 22 of this very issue.

The Kronos is Korg's most advanced keyboard workstation to date, featuring over 30GB of samples stored on its solid-state disk drive, endowing it with highly realistic acoustic instrument sounds, in addition to extremely powerful physical modelling and virtual analogue synthesis engines. With its built-in drum kits and comprehensive sequencing abilities, there's not an awful lot it can't do! It's not for the short of arm and deep of pocket, however. 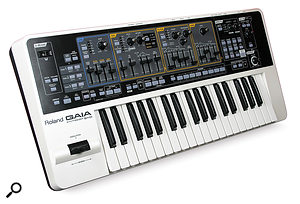 Although it's a digital synth, the Gaia's control arrangement is very analogue-like, making it convenient for real-time performance tweaking. Features include Roland's optical D-Beam controller, a variety of built-in effects, and a generous 64 notes of polyphony. Emphasising the Gaia's performance credentials is the fact that it can run on batteries!

Available in 61- and 88-note versions, the MOX employs Yamaha's Motif synth architecture to generate sounds. Thanks to its USB port, the MOX can also act as an audio interface, and as a highly integrated controller for Cubase and Nuendo.

The latest in Novation's popular Nova range, this analogue-modelling synth includes a vocoder, and can also act as a USB audio interface. The Ultranova isn't as knob-laden as some synths featured here, but employs a system Novation call Touch Animation to assign to its eight rotary encoders the parameters you're most likely to want to tweak. 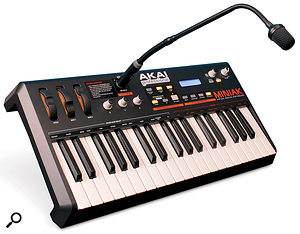 Another vocoder-equipped synth, Akai's Miniak combines virtual-analogue synthesis with a built-in drum machine and a host of effects. It's not the easiest synth to program, but the sounds you can coax out of it are top-notch, despite its low cost. 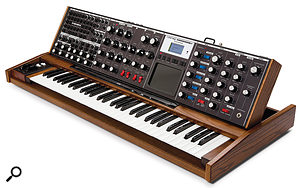 Arguably the Rolls Royce of synthesizers, the Voyager XL is both highly desirable and very expensive. This visually striking synth offers a vast range of modulation possibilities, courtesy of its integrated patch panel.

Though its name is similar to that of Roland's classic analogue Jupiter 8, the Jupiter 80 is a different beast entirely. It's digital and boasts a powerful analogue modelling section, but also offers high-quality acoustic instrument sounds and incorporates audio recording and playback. Some unusual performance features make it well suited to live use.

Available in 73-, 76- and 88-key versions, the Clavia Nord Stage 2 is something of an all-rounder, combining a synth engine with realistic organ, piano, harpsichord and clavinet sounds. Allowing you to load and play your own samples, and with a comprehensive set of controls for real-time sonic manipulation, it's not cheap, but it covers a lot of bases.

The Venom is an analogue modelling digital synth that offers tight integration with computers via its USB port, allowing you to tweak the synth from a PC or Mac. The Venom's forté is modern, abrasive sounds, rather than the smoother tones associated with analogue synthesizers.