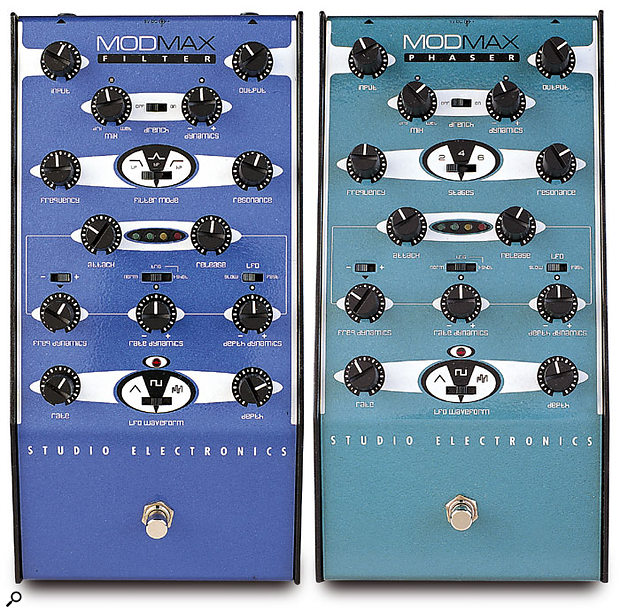 Studio Electronics never seem to do a job by halves, so when they went into the pedal business they ended up building something closer to a series of analogue studio rack processors in a pedal format. Their Modmax pedal range comprises Filter, Phaser, and Ringmod, the first two of which are reviewed here. Both follow a similar physical format, with an included mains PSU, a 13-knob control panel, a three-position waveform switch, and a stomp-box-style bypass switch. All models can be used with electric guitars, line sources, or other electronic instruments via the unbalanced jack input, and in all cases the output is mono on an unbalanced jack.

Although structurally simple, the pedals are very sturdily built from folded sheet steel, with plenty of clearance between the switch and the knobs to allow for imprecisely placed feet! The bypass switch is of the traditional latching type that responds with a firm thunk when pressed. I felt the switch legending wasn't particularly clear, and the arty typeface didn't help much either. On a practical note, a sticker under each unit also warns that the silk screening depicting the power supply polarity is wrong, so it's probably safest to stick with the power supplies that come with these pedals.

The Filter pedal is essentially a resonant filter that has switchable modes (band-pass, low-pass, or high-pass) and that can be modulated either by an envelope follower, an LFO (with switchable triangle, square, or random waveforms), or a combination of both. The envelope follower's behaviour is set using the Input control (which affects the trigger threshold) and the Attack and Release controls. The LFO section has its own Depth and Rate controls, as well as a Fast/Slow range switch, and there's a four-LED meter in the centre of the unit that shows when the input is high enough to trigger the envelope follower. Ideally, the red LED should light only on the signal peaks.

The secret to the flexibility of all the units in the Modmax range is that you can dynamically modulate four different effect parameters, independently and simultaneously. There's the sweep of the filtering or phasing effect, the effects mix, the LFO rate, and the LFO depth. Both positive and negative modulation are available.

The Input gain control has enough range to accommodate guitars, electronic instruments, and line-level signals, and it feeds directly through to the output when the bypass switch is operated. Although it's a clunky mechanical switch, there's no noticeable electronic switching noise when operating it.

The Output control sets the output level to match line-level devices or instrument amplifiers, while the oddly named Drench slide switch adds extra gain that can be used to overload the effect output stage in a creative way. The effect level may then be re-balanced using the wet/dry Mix control. The associated Dynamics control modulates the wet/dry mix from the sweep envelope.

The filter section has the three switchable modes described earlier, plus the usual Frequency and Resonance controls. Three trigger modes are available for LFO control over the filter sweep: Norm, Trig and One-shot. In Norm mode, the LFO is free running, while in Trig mode the start of the LFO cycle is re-triggered from the input signal whenever it is high enough to light the red LED at the top of the centrally located bar-graph meter. In One-shot mode, the LFO triggers in single cycles, producing an envelope-like effect. Further Dynamics knobs provide real-time control over the filter sweep's range and the LFO's rate and depth. The LFO's own Depth control determines the depth of the LFO signal before any dynamic control is applied.

The control layout of the Modmax Phaser is very similar to that of the Filter except that the filter mode switch is replaced by one that selects two, four, or six stages of phasing, corresponding to the analogue phase-shift stages employed by the original phaser pedals. As a rule, the more stages you have, the more notches you get in the frequency response and the stronger the phasing effect. In this instance, the Resonance control makes the phased sound more peaky in character by accentuating the notches and peaks, while Frequency affects the tonal range. I found that moving Frequency to either extreme tended to seriously dilute the phasing effect — it worked best to leave this control in the middle of its range.

Filter produces the characteristic swept-filter sound in resonant low-pass mode, while the band-pass mode is more like an auto-wah effect. The high-pass option generates the characteristic thin, cutting sound that you hear when all the low frequencies have been removed, so what you get in the filter department pretty much covers all the bases without getting too silly. I couldn't make much sense of the Drench switch on the Filter model, as it seemed over-aggressive and difficult to control, not to mention noisy. However, it fared somewhat better on the Phaser, adding to the range of available effects.

The types of modulation effects on offer, as you might expect, range between envelope-modulated filter sweeps and LFO-controlled filter modulation, and you can get interesting combinations, such as filter sweeps where the LFO control only takes effect once the effect of the envelope follower has died away. Deep LFO modulation of the filter frequency with high resonance settings can cause very audible thumping effects, though, while in the case of Phaser some settings reveal very obvious sweep modulation noise.

The quality of both the filtering and phasing effects is warm and generally musical, though whether you need this degree of modulation control to improve your music only you can say. I also found the control operation to be somewhat confusing and the results were not always predictable.

As you've probably picked up by now, I'm in two minds about these pedals. The basic quality of the effects on offer isn't in dispute, but the controls aren't as intuitive as they might be and it's also rather too easy to end up with a noisy or thumpy-sounding end result if you're not very careful about how you set the controls. Being able to dial up effects that respond dynamically to the way you play is generally a good thing though, and being able to dynamically blend envelope- and LFO-modulated effects makes it possible to set up sounds that would be impossible by any other means.

While I can appreciate the creative potential of these units in some areas, I know I'd probably never use them myself as straight guitar processors, as I can get all the effects I need from more conventional effects units or plug-ins. However, there are other musicians who would probably go for this combination of flexibility and quirkiness in a big way, and I can see lots of applications in processing sounds to create dance grooves or loops, or in mangling the sound of a synth. If you are adventurous with your filter effects, you might find this range of pedals gives you the tools you need to create new and wonderful treatments, but that's something you'll have to decide for yourself.

Both pedals are flexible and are capable of some good effects, but I felt they were better as creative sound-design tools than for straight processing of instruments.