With expected component shortages and the consequent rise in hard‑drive prices, what can the PC musician expect from 2012?

Are you lost without VU meters? Klanghelm's VUMT is a versatile bargain with plenty of different applications.

In the current economic climate, punters are, perhaps understandably, more cautious about splashing out on a new PC so, in the UK at least, some distributors have ended up with high inventory levels (although perhaps not quite the 'PC mountain' that some industry pundits have suggested). Sadly, some of these distributors are probably now relieved that they do still have plenty of stock, since the dreadful flooding in Thailand has caused hard-drive prices to skyrocket (Western Digital and Toshiba have been hit particularly hard by the floods). There are warnings of possible PC and associated component shortages at Christmas, as well as going into 2012.

For those that do take the plunge with a new computer this Christmas, notebooks are now by far the most popular choice, accounting for over three times as many sales as desktop PCs. However, in an effort to boost Christmas computer sales, as I write this in mid-November some of the largest retailers are already offering sizeable discounts on notebooks. Unfortunately, as I've said many times in this column, buying a notebook PC for low-latency audio use is nowadays a real gamble unless you go to one of the specialist retailers, so tread very carefully if you find yourself tempted by an apparent bargain.

The third most popular computer format choice at the moment is the touchscreen tablet. Apple's iPad range is still the leader in the popularity stakes, although the release of Windows 8 in 2012 is expected to result in a shift in emphasis in the tablet market. We'll just have to wait and see whether it heralds a new era for the PC platform.

Meanwhile, one casualty of the shortages and notebook discounts is the new slimline 'ultrabook' laptop format that I first discussed in PC Notes October 2011, which is currently deemed desirable, but too expensive. Some expect these new contenders to steal a sizeable chunk of the tablet market, but only if they drop significantly in price. Along with the recent 20 percent increase in the Chinese minimum wage (which, while laudable in itself, will undoubtedly mean further computer price increases across the world), it looks as if 2012 is going to be an interesting year for the PC platform, in more ways than one!

A Room With A VU 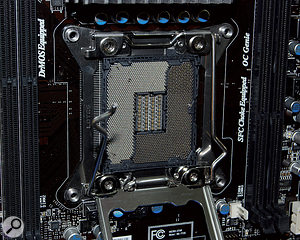 Closely monitoring peak audio levels is critical to avoid nasty digital clipping, which is why most DAWs offer peak-reading meters. However, when setting up mix balances or using the latest 'console colour' and 'analogue warmth' plug-in simulations, you should ideally be watching a VU meter that displays more average levels instead. This will both help your mix balance and achieve suitable gain staging for your 'analogue' plug-ins, so they better emulate the hardware that inspired them.

Most such plug-ins include some sort of metering, but they rarely offer ballistics (the rise and fall times of the level pointer) that match real-world VU meters. Enter the first pocket-money product from newcomers Klanghelm (www.klanghelm.com): the VUMT (VU Meter and Trim) plug-in.

There are alternatives available with similar switchable VU/PPM meter ballistics, such as PSP's freeware VintageMeter, but what I love about VUMT is its smooth and accurate needle animation, its additional 'hold needle' displaying the current maximum VU reading, and its amber/red clip LED that illuminates at a definable user level and clip point, so you can simultaneously keep an eye on peak levels. The extremely handy +/-20dB gain trim is also perfect for your gain-staging experiments: just insert one instance of VUMT before and after your plug-in, with complementary trim settings (such as -10dB and +10dB, respectively) and you can quickly alter its 'drive' level for more or less warmth.

VUMT has four switchable skins, is supplied in 32-bit and 64-bit stand-alone and plug-in versions, in both single- and double-meter formats (the latter offering stereo linking and M/S metering options) and, best of all, costs just €6.28, making it an impulse purchase. Highly recommended!

Cram It With RAM!

Back in PC Notes June 2011, I discussed the advantages of Intel's then forthcoming Z68 chip set, which was more overclockable than the H67 and more versatile than the P67. However, six months is a long time in the PC world, and by the time you read this Intel's even newer X79 chipset will have been available for a few weeks. Ironically, this component costs motherboard manufacturers 50 percent more than the Z68, yet offers almost no new features, apart from the almost inevitable new format of CPU socket (LGA 2011 to replace LGA 1155) to partner the latest Sandy Bridge-E CPUs.

Nevertheless, this release offers positive news for the professional musician. LGA 2011-based motherboards will have either four or eight DIMM sockets, each of which can support up to 8GB of DDR3-1600 RAM in quad-channel format. So anyone with huge sample requirements (such as those running the Vienna Symphonic Library) will be able to install up to 64GB of memory without breaking the bank. Meanwhile, the Z68 chip set is expected to die out quietly. It's a tough world.