Are you running out of space despite having hard drives of seemingly vast capacity? Temporary junk and duplicated files could be the culprit — and PC Notes can help you search and destroy... 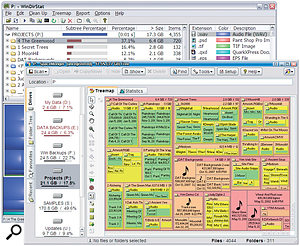 Where has all your hard drive space gone? You can answer this question quite easily once you view the drive's contents in different visual formats, using the utilities shown here.

Wouldn't you have thought that with hard drives of several hundred gigabytes in capacity selling for peanuts, we'd all have acres of storage space available? Well, apparently not, judging by the number of musicians who ask where all theirs has disappeared to. What's most surprising is that they often don't have much idea of what's taking up the majority of this space, or how to claw some of it back.

Fortunately, there are several handy utilities that can help them find out. One classic is Piriform's CCleaner (www.ccleaner.com), which I discussed in SOS May 2007 and still use regularly. This program can delete much of the temporary junk that accumulates on hard drives, and while it's unlikely to reclaim vast amounts of space, it may locate dozens or even hundreds of megabytes of unwanted detritus.

More radical is Spacemonger 2.1 (www.sixty‑five.cc/sm), whose 'Treemap' display shows your hard drive contents as a set of rectangles, with their size on screen proportional to their file size. Just by displaying your hard drive data in this different visual format you can easily spot things that you might never notice in Windows Explorer, such as a massive collection of Windows System Restore points, or a huge file relating to the Windows Hibernation feature (remember, if you have 4GB of system RAM, the hibernfil.sys file will also be 4GB in size). Just examine the largest rectangles to spot what's taking up most space on each drive.

Spacemonger's window can be any size you like, up to a full‑screen display, and you can double‑click on selected folders to zoom in on their contents, and zoom in and out using your mouse scroll-wheel or various tool options. There's a status bar across the bottom of the display that shows selected file and folder information (for instance, if I select my Program Files folder it provides an instant read‑out of its contents as 23,143 files, totalling 2.2GB), plus a selection bar with a more detailed list of all the currently selected files.

The latter is also a handy partner for the Find function that will track down every file whose name contains the characters you enter. Type in ".WAV”, for instance, and it will instantly highlight all your audio files in the Treemap display and list them in the selection bar. Clicking on the Size column will then show you where all the largest ones are.

You can even switch to a Statistics display, with the contents of your chosen hard drive shown in pie‑chart format according to file type. If, for instance, you click on the 'audio' portion of a pie, every audio‑related file is automatically selected in the selection bar and highlighted in the Treemap, making it quick and easy to find out what proportion of your drives are being used for storage of different file types. There are also Open, Delete, Copy and Move functions to help tidy up your hard drives. Spacemonger 2.1 has an extremely modest $25 single‑user license, and is a very useful tool to have if your hard drive is bursting at the seams!

WinDirStat (http://windirstat.info) is another disk usage viewer and cleanup tool, this time freeware. Like Spacemonger, it offers a colourful Treemap, although I find this less useful than that of Spacemonger, since its rectangles contain no text‑based information, such as file names. However, it offers one very useful extra: its Explorer‑like Directory List features two columns labelled Subtree Percentage, in bar‑chart and text form. These show what proportion of your data is contained within each folder, and by clicking on these column headings you can sort your folders into ascending or descending order of size.

It's not until you try it that you realise how useful this slight twist in data presentation can be. For instance, I quickly spotted that one of my music project folders was more than double the size of the others. A couple of minutes of detective work showed this to be because it contained lots of 32‑bit audio mixdowns of elderly mixes that were no longer required, and I was quickly able to regain several gigabytes of hard drive space by deleting them. I also spotted many gigabytes worth of update files for applications installed elsewhere on my drives, so by archiving this rarely‑required data onto several DVDs I could regain 10GB of drive space. It's easy when you know how!

Attack Of The Clones

Another source of hard drive bloat is duplicated files. I recently regained around 20GB on my Samples drive after I realised that the libraries that I installed with GigaStudio 3 and then Gigastudio 4 contained many identical instruments. I performed the task of weeding out the duplicates by hand, and it took several hours loading in and auditioning the sounds in turn before I was satisfied that they were identical and could be deleted.

If only I'd had Easy Duplicate Finder (www.easyduplicatefinder.com) at the time, it would have done the same work automatically within minutes, presenting me with a list of duplicate files according to whatever guidelines I entered (file types, minimum and maximum file size, and so on). When using this utility, I was shocked at the amount of unnecessary duplication on my hard drives, finding no fewer than six identical PDF-format manuals (all with different titles) from one developer, and hundreds of duplicate MOV files from another.

Sometimes such duplicate files are needed, but Easy Duplicate Finder lets you rename all but the originals by adding a prefix or suffix, so if any application subsequently complains that files are missing you can reinstate their original names. If not, you can later delete them en masse, or move them to another location.

Easy Duplicate Finder is donationware, and there are also more specialist versions of this utility available. Duplicate Photo Finder scans for duplicate and similar image files in JPEG, TIFF, BMP, PNG and GIF formats, and is clever enough to recognise rotated, resized, cropped and colour‑corrected images. A similar tool, Duplicate MP3 Finder, will track down identical or similar compressed music files, also comparing the artist, title and album information contained within them. For some musicians this could be a very fruitful way to regain hard drive space. 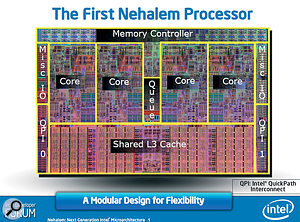 The big PC news this month is the arrival of Intel's new Core i7 processor range (previously codenamed Nehalem). The Nehalem also sees the return of hyperthreading, so while the first batch of three Core i7 processors all contain four cores, they appear to the operating system as a whopping eight virtual cores within one physical package.

Like recent Core 2 Duo and Core 2 Quad ranges, the Core i7 employs the faster, yet cooler, 45nm manufacturing process but has a new Socket 1366 format, and a new motherboard chip set to accompany it: the X58. Unfortunately for those with legacy soundcards, PCI slots seem scarce on most X58 motherboards, but there are usually plenty of the PCIe variety. Since target customers include gamers, speedy graphics are of paramount importance, so Intel support at least two PCIe x16 graphic slots for use with up to four monitor screens, although musicians can still use quieter and more modest graphics cards.

The most significant change over previous Intel offerings is that the i7 abandons the Front Side Bus in favour of a new 'QuickPath' interconnect between CPU and motherboard chip set. On the first batch of Nehalem offerings, QuickPath uses a 20‑bit wide, 25.6GB/s link, providing double the bandwidth of Intel's X48 chip set, coupled with a 1600MHz FSB. Moreover, the memory controller is no longer part of the motherboard chip set, but now lives on the CPU itself. The RAM itself is directly connected to it, and is in a new tri‑channel DDR3 format, requiring installation in sets of three sticks at a time — so expect to see systems advertised with 3GB and 6GB of RAM.

Judging by my initial tests (I've already received the first audio PC in the UK featuring a Core i7 processor, and you can find the review starting on page 110), this greatly increased bandwidth should not only avoid data bottlenecks for those who routinely load in several gigabytes of sample data (as discussed in PC Notes December 2008), but also greatly improves performance at latencies below 3ms.

I don't often get excited by new processors any more, but Intel's Core i7 overcomes that lethargy. This is a superb CPU, offering a big hike in audio performance, and I predict it will be extremely popular among musicians. Dust off that credit card now!

Now dubbed SuperSpeed USB, the final specification for USB3 has been published by the USB 3.0 Promoter Group. As I reported in PC Notes February 2008, Superspeed USB offers peak data transfer speeds of 4.8Gbit/second. This is ten times faster than USB 2.0, and six times faster than Firewire 800, but to put it into a more practical context, USB3 could transfer an entire High‑Definition movie into your PC in just over a minute.

The new standard will feature optical connectors (which will resolve those pesky ground‑loop problems). However, the existing wire‑based ones will be retained alongside, using a cunning connector design with deeper plugs and sockets; the additional USB3 contacts are placed further inside the socket, so that you can still plug in and use existing USB 2.0 devices, while USB3 plugs will be longer, to reach the extra contacts. Unfortunately, USB 1.1 devices are unlikely to be compatible with USB3; expect to see USB 2.0/1.1 sockets on motherboards for some years to come, so that we can still plug in our peripherals!

To help ease the inevitable confusion for users, there's a new logo for Superspeed USB, and the connectors will also be a different colour. Those who have run into problems bus‑powering multiple USB devices will be pleased to hear that USB3 provides more power per socket, so we should hopefully require fewer of the wall‑wart PSUs that cause musicians yet more ground‑loop misery.

USB3 devices aren't likely to appear much before 2010, by which time the next version of Firewire may also be with us. The top speed of Firewire S3200 won't be quite as high as that of Superspeed USB, although it will impose lower CPU overheads. However, this may not save it from relegation to the second division, since Apple have already dropped Firewire ports from their latest MacBooks. If this trend continues, expect a greater proportion of development time to be spent on USB audio interfaces in the future.