Keeping your music PC hooked up to the Internet, with security software active, has a surprisingly small impact on performance...

A few issues ago (in 'PC Notes' September 2011, to be exact) I outlined why I'd abandoned my previous Internet-free music PC installation in favour of one that's permanently online. Given the processing power of today's CPUs, I've noticed little, if any, reduction in audio performance when my anti-virus checker is sitting in the background doing its thing, but some musicians still seem to be concerned about this, so I decided to mount a more detailed investigation.

I first ran some benchmarks on the non-Internet 'review' partition of my PC, before installing my usual PC Tools Spyware Doctor with AntiVirus combination and running the tests again with it active in the background while connected to the Internet. With AV checking in operation, the installation of new software now took noticeably longer, because the time taken to check the hundreds, and sometimes thousands, of new files being installed obviously mounts up.

However, I'd personally prefer to wait slightly longer and have them double-checked for nasties before they have a chance to do any damage. As you might expect, Internet web-page loading was also slower with AV enabled, for the same vital reason of scanning incoming data, but this, after all, is why we installed our AV checkers in the first place. 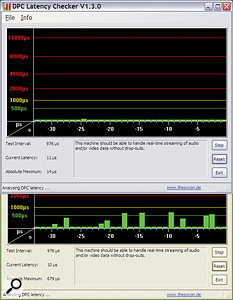 Proof that connecting your music PC to the Internet needn't compromise its audio performance: above is the very low DPC Latency readout of my music PC while on-line with background anti-virus checking active, and below with email and IM polling active as well (much higher, but still acceptable for audio).Fortunately, the AV footprint proved to be minimal. Using Task Manager, I totted up the extra RAM usage for software firewall, virus checker and everything else relating to Internet access and it came to a tiny 80MB: about two percent of the typical 4GB installed on most music PCs. Meanwhile, the DPC Latency Checker utility still showed a wonderfully low 14 microseconds maximum reading, ensuring excellent low-latency audio performance.

Even launching my Thunderbird email and Skype services so I could stay abreast of incoming emails and instant messages only increased RAM consumption to 290MB (just seven percent of a 4GB total), although the maximum DPC Latency reading did now rise to around 700 microseconds, which is still perfectly adequate for audio streaming, although you might want to switch these two off when you're pushing audio applications hard. To directly measure any change in audio performance I then ran the all-important DAWbench Universal Benchmark, which showed a drop of just one ReaXcomp multi-band compressor plug-in from a previous total of 46 for my now aged 2.4GHz dual-core processor (and hardly anything to worry about).

Of course, your mileage may vary, depending on which AV checker you have installed, but given that I recently managed to run over 300 ReaXcomp plug-ins on a Core i7 2600k review machine, I can safely say that losing one plug-in from such a total due to adding Internet access and background virus checking will be undetectable in practice. Just make sure your virus checker is set to 'on demand' scanning rather than as a scheduled task. Reassured now?

Sticking with the topic of resource reduction, Microsoft are currently causing some concern with their announcement that Windows 8 is being optimised with a significantly reduced memory footprint that will run well on systems with 1GB or 2GB of RAM and extend battery life on mobile systems. They are doing this partly by reducing the number of services that are started by default, by removing duplicated data, and by shuffling memory priorities between multiple applications.

While this is laudable in itself, and particularly appropriate given Microsoft's new focus on new low-RAM tablet formats, some industry experts are already concerned, for two reasons. First, system builders worldwide may not be too keen to promote a new operating system using fewer processor cycles and RAM than its predecessor and designed to run on existing PCs (after all, a huge number of customers traditionally buy new PCs when a new operating system becomes available). Second, with RAM prices currently low and all the world and his dog buying computers with 4GB or more RAM, it perhaps seems counter-productive to put such design resources into saving about 120MB of memory! 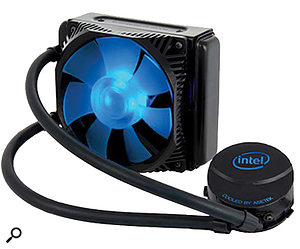 2: Watercooling goes mainstream! Intel's new Sandy Bridge 'E' series processor will be bundled with an Intel-badged liquid-cooler. Intel Get Extreme: As you read this in mid-November, Intel should just be releasing their next generation of Sandy Bridge-E (for Extreme) processors. This 3000 series will initially be available in three models: a quad core with 3.6GHz top Turbo clock speed, and two hex-core models with top speeds of 3.8 and 3.9 GHz respectively, although both of the latter feature unlocked cores, so could be pushed even faster. All three models will require Intel X79-based motherboards with LGA2011 sockets, also due to be released in November. The 3000 series is also notable for another reason: it will be bundled with new Intel-brand sealed-liquid coolers with a large, Asustek-manufactured waterblock and a 120mm fan. If you're thinking of buying or building a Sandy Bridge PC and need to run 500 or more audio plug-ins simultaneously, watch this space! For more information, go to www.intel.com.