Intel's New i5 & i3 CPUs Skip to main content

Powerful CPUs seem to get cheaper by the day, as evidenced by Intel's new i5 and i3 series, which promise enough grunt for even demanding musicians, but with a lower price tag than the popular i7 range.

Intel's powerful Core i7 Nehalem processor range is proving very popular with musicians who have demanding requirements and plenty of money to spare, but not everyone has such deep pockets. So if you want to buy or build an Intel‑based PC, perhaps now's the time to get excited about Intel's forthcoming Core i5 series. Codenamed Lynnfield, Core i5 is a more affordable desktop alternative to the i7, and the first models should be available by the time you read this, just a few days after I write it.

The Core i7 series abandoned Intel's traditional Front Side Bus in favour of a new and faster QuickPath interconnect between CPU and motherboard chip set, as well as incorporating a tri‑channel memory controller that requires RAM to be installed in sets of three sticks, rather than the two of the previous dual‑channel variety. It also saw the return of Hyperthreading, so these quad‑core models appear to Windows as a whopping eight virtual cores.

The three initial quad‑core Core i5 models, clocking at speeds of 2.66GHz, 2.8GHz and 2.93GHz, are expected to take over from Intel's Core 2 Quad range as 'mid‑range' products, and by the beginning of 2010 you'll also see a new i3 entry‑level dual‑core range that's even cheaper. To keep costs down, the quad‑core i5 models omit QuickPath, the third memory channel and Hyperthreading, but should nevertheless offer some impressive computing power for the price, with the performance of the slowest Core i5 750, at 2.66GHz, beating AMD's Phenom 955 II X4 quad‑core running at 3.2GHz!

As usual with Intel processors, a new support P55 chip set is required to accompany the i5, but motherboards featuring this are likely to be considerably cheaper than the X58‑based ones designed for tri‑channel Core i7 systems. However, there's more good news, since the P55 chip set also supports the i3 and i7 ranges, providing a lower‑cost motherboard alternative for those who need the extra grunt of the Core i7 but are willing to stick with dual‑channel RAM. Various motherboard manufacturers (including Asus, Gigabyte, MSI and Intel themselves) have had P55‑based boards ready for the Core i5 series since about July, waiting for the release of the i5 processors themselves.

Many musicians are hoping that the arrival of the i5 and then the i3 will also push down the prices of existing Intel Core 2 Quad processors, but I suspect that some of the latter may be quietly phased out from the range as well, along with the remaining Core 2 Quad and Centrino models, so don't wait too long if you're hoping to use one to build a powerful budget PC. 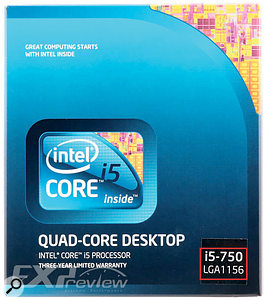 The 'i's have it: Intel's new mid‑range i5 series processor looks like a good prospect for musicians who can't afford the i7 route, while the forthcoming i3 series should give excellent performance at budget prices.

Have you ever run into problems with applications inexplicably failing to run, and error messages telling you that you're out of disk space when you know that there are at least several gigabytes available?

This month I had exactly this problem, and it was most confusing. I'd downloaded a fairly large (630MB) sample library in compressed RAR format and was attempting to install it on my Samples partition (with 35GB of space available), when part‑way through it claimed to have run out of space. No way, I thought! At first, I wondered if the downloaded file was corrupted, but in the next hour I also experienced problems while attempting to update my iLok drivers, and began to wonder if my PC had got virus problems. However, a full virus scan gave it a clean bill of health.

Eventually I tracked down the problem, and it turned out to be caused by temporary files created in my 'C:\Documents and Settings' folder during the sample library install, which in total amounted to over 2GB. These had completely filled the remaining space on my C: drive and, because the decompression process bombed out due to this lack of space, the temporary files had left my C: drive with just 56Kb free. This, in turn, left no space available for other temporary files, which is why my iLok update failed to run, but once I'd found and manually deleted the temporary files, everything returned to normal. The moral of this tale? Always ensure you have at least several gigabytes of free space for temporary files on your C: drive, even if you don't think you'll ever need it!.

Windows Winner: Windows 7 already seems to be a winner before its official release in late October, partly because it's essentially an evolutionary upgrade to Windows Vista, rather than a great leap into the dark, as was its predecessor. It features a new, icon‑based taskbar, updated Explorer, several enhancements to the Aero graphic interface, easier file sharing with HomeGroups, more streamlined Media Player 12, and a new version 11 of Direct X. However, what's most pleasing for many who have tried the Beta version is its much smaller memory footprint compared with Vista, much snappier performance, and mostly excellent compatibility with third‑party hardware. Windows 7 looks destined to encourage even die‑hard XP‑using musicians to upgrade! www.microsoft.com

Sonar Tweets: Cakewalk have come up with a novel way to publicise their new Sonar 9 DAW application, using the Twitter micro‑blogging service. Each day a snippet of news highlighting new features or improvements is released to tantalise Sonar users, and it's a very effective campaign. The Tweets provide links to the Cakewalk site so that readers can see the graphic sneak previews as well. http://twitter.com/Cakewalkinc