The Windows Store is due to open in late February, but will over-zealous security measures lessen its appeal?

The big news for this particular column is that Microsoft's Windows Store is to be opened in late February 2012, distributing freeware/Open Source and commercial Windows 8 apps. The timing is to coincide with the release of the Beta version of Windows 8 itself. So, judging by previous operating-system roadmaps, Windows 8 and Windows 8 tablets are likely to be officially released around six months later, in August 2012. 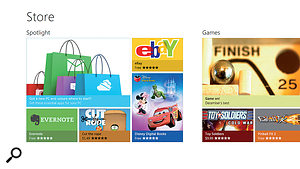 Designed for 'easy app discovery', Microsoft's Windows Store will be launched in late February 2012.However, one industry concern has emerged about Windows 8 apps: an auto-destruct switch that lets Microsoft remove apps from computers if "your security is at risk, or where we're required to do so for legal reasons”. In other words, anything deemed 'dodgy' on your PC may be culled. Microsoft do, however, state that if they remove an app you've bought legitimately they may refund the amount you paid for the license. How reassuring!

A debate also rages about what proportion of Windows users will upgrade to Windows 8, some saying that its touchscreen-centric design is totally irrelevant to the way most desktop users work, while others claim that, even if you continue to use your mouse/keyboard interface, the new 'tablet generation' users will find it totally intuitive. It will be interesting to see what proportion of punters take the plunge.

On the hardware front, plenty of musicians build their own audio PCs and save some money. However, the queries that crop up so regularly on the SOS forums prove that some of them still don't understand all the setup differences between a mainstream PC and one specifically built for audio purposes, particularly if they want it to run with low acoustic noise and low latency, and be reliable in the long term.

First of all, it's important to assemble a set of components that are known to work well not only with each other but also with a wide range of audio interfaces. Some interface manufacturers highlight particular motherboards, chip sets, graphics cards and so on that may have compatibility problems to be wary of, but others don't, so be prepared to do some forum research and compile a good parts list. Remember that what suits a gamer won't necessarily be the best choice for a musician or an overclocking enthusiast.

As long as you're careful, assembling the components into your PC case tends to be relatively straightforward, but once you first switch on the finished PC there's a lot more to it than making sure the fans and drives spin up, the motherboard LEDs light up correctly and that no components start to emit wisps of smoke. 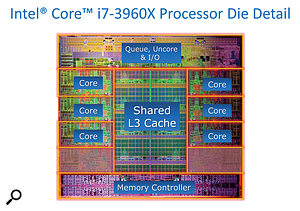 Intel have caused some consternation after deliberately disabling two of the cores of its new and very expensive Core i7 3930X processor.

There are now various arcane BIOS tweaks you may need to carry out to avoid digital background noises, and certain motherboard devices may also need disabling if you want to achieve low-latency audio. In addition, if you want your PC to be quiet enough to be able to record using a nearby mic, you'll also need to pay close attention to your cooling arrangements.

Specialist audio PC builders have almost turned this into an art form, using low-noise fans and power supplies, and hard-drive silencers, as well as adding acoustic treatment to the case, but there's rather more to it than switching on and hoping for the best. At the very least, you need to monitor the temperature of your expensive new CPU when running 100 percent stress tests, to ensure that it never rises above about 70 degrees Centigrade.

However, for optimum results you also need to balance your fan speeds to ensure smooth airflow around the case and avoid component hotspots, and, for lowest noise, to reduce fan speeds under maximum stress, so they're just spinning fast enough to do their job. This means running tests while monitoring component temperatures and checking DPC latency for rogue components that may otherwise prevent you from reducing your audio-interface buffer size for really low latency.

None of this is particularly difficult, but it all needs to be done if you want to get the best performance from a DIY PC. The specialist audio PC builder may charge you a little more for a tweaked and stress-tested PC that's guaranteed to work well with a wide range of audio hardware and software, but once you've factored in all the hours it takes you to come up with a list of suitable parts, assemble them and do all this work yourself, with no guarantee at the end of it, the specialist can prove surprisingly good value!

Extreme Choices For Sandy Bridge-E: Intel's new flagship processor — the Sandy Bridge-E (for Extreme) Core i7 3960X — offers impressive performance but with a huge price tag, and Intel are also drawing some flak for choosing to disable two of the eight processing cores on this chip. Rather more affordable is their latest Core i7 3930K model (just 100MHz slower, yet around 40 percent of the price, and still offering around 15 percent better performance than the current 2600K favourite).

Hard Drive Shortage Starts A New Trend: With some hard-drive prices now increased by as much as 150 percent since the aftermath of the Thailand flood, and with supplies also getting extremely low, some notebook prices may increase in the early part of this year. However, this has had one unexpected side effect: some people are now choosing small SSDs for their new PCs instead of the larger, yet now similarly priced, traditional hard drives.