If you're keen to squeeze the last drop of performance from your Windows PC, read on...

With the typical PC consuming under 1W while snoozing, yet being ready to work around a second after you wake it up, it's small wonder that last month's recommendation to use Windows Sleep mode struck a chord with many of you. 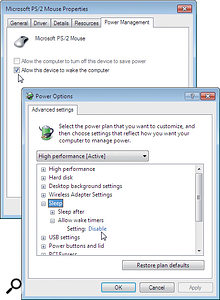 If your PC keeps waking from its slumber at odd times, there can be many causes, but there's usually an easy cure.However, I was emailed by a couple of readers who'd followed my advice but whose PCs kept mysteriously waking during the night. The miscreant causing such mysterious boot-ups could be the Windows Task Scheduler, which can automatically run background optimising or cleaning processes such as defragmentation in the wee small hours. If that's the culprit, you can disable such tasks by navigating to the Power Options section in the Control Panel, clicking on 'Change plan settings' for your chosen power plan, and then on 'Change advanced power settings'. Finally, open up the Sleep options by clicking on the associated '+' sign and set 'Allow wake timers' to Disable.

PC devices with active 'Allow this device to wake the computer' settings are more likely to be the cause. You can inspect them individually in Device Manager, and on my PC the most obvious candidates were the iLok and eLicenser dongles, PC keyboard and mouse, USB hubs and my network adapter. Just double-click on each device in turn, select its Power Management tab and untick 'Allow this device to wake the computer'. Disabling your mouse will prevent vibration or the cat accidentally waking your PC, and disabling your network adapter will prevent email or Skype messages doing the same — although I left my PC keyboard active, so that I can use its dedicated Sleep button.

Putting In The Squeeze

Most musicians wish to be able to squeeze the last drop of performance from their PCs, and this is a lot easier to achieve than it used to be, as Windows 7 and 8 bundle nearly every utility you need from day one. Mechanical hard drives may still benefit from an occasional defragmentation, re-organising their files to minimise physical head movements, and speeding up drive transfer rates (particularly when they're rather full), but most hard drives are significantly faster than they were a few years ago, and Windows 7 and 8 use the Task Scheduler to run built-in defrag utilities during down times. The solid-state drives used by so many of us to speed up Windows shouldn't be defragmented at all: they contain no moving parts and defragging may shorten their life.

The very best way to avoid your PC slowing down over time is to avoid installing junk software. Are you really going to use that 'must-have' freeware after the first few tries? If not, get rid. Also, be very careful when installing legitimate software not to blindly accept its offers to add 'bonus' items by default. For instance, Adobe's Flash Player will install McAfee's Security Scan Plus, while Java updates will install the Ask toolbar. Over time, all these unnecessary choices and hidden extras will bloat your Windows install, clog your registry, increase your start-up times and may even impinge on audio performance by running background tasks at odd moments.

To find and get rid of most unwanted software use the Windows Uninstall Program option in the Control Panel. To discover tasks that are currently increasing your start-up times, just use the Startup tab of Windows's MSCONFIG utility to see what's being loaded into your PC each time you boot, and disable anything that's not strictly necessary (how many routines really need to run daily to check for application updates?)

An even easier alternative is to use one of the few third-party utilities that still merits being downloaded. I've recommended Piriform's CCleaner (www.piriform.com) on various occasions over the years, and it continues to be improved while remaining free in its basic version. Apart from its comprehensive clean-up of temporary browser, system and application cache files it also includes a useful Registry Cleaner, a very similar Uninstaller to the Windows one, a better viewer/editor for Startup tasks than MSCONFIG and a utility that hunts for duplicate files (you may be surprised at just how many there are!) —and it all comes in one handy 4.2MB package.

Microsoft's Surface Music Kit could be a sign of things to come for the PC musician!Microsoft have announced permanent price drops for their entire range of Surface tablets, as well as the new Surface 2 and Surface 2 Pro versions which are due to be released on 22 October 2013. As usual, the Pro version is likely to be of more interest to musicians, as it can run standard Windows 8 applications rather than Microsoft's 'apps'. With a 10.6-inch screen and Intel Core i5 Haswell processor, the Pro 2 is claimed to be 20 percent faster than its predecessor, and is available in four configurations (4GB RAM and either 64GB or 128GB flash memory, or 8GB RAM and 256GB or 512GB flash memory). Prices range from £719$900 to £1439$1800. Another announcement by Microsoft's, which came as a pleasant surprise, was the launch of the Surface Music Kit, which is a keyboard/software combo designed for remixing, which automatically syncs beats per minute and key for seamless mixing. The backlit Music Cover features pressure-sensitive pads to control song parts, loops, beats and so on, along with pressure-sensitive sliders controlling volume and effects. Full spec and pricing are yet to be announced, but as a hybrid between hardware and touchscreen, this could be the biggest carrot yet for we musicians to dip our toes beneath the Surface!