Intel Haswell on the way. By Martin Walker

The imminent release of Intel's latest processor, Haswell, is expected to bring with it improved graphics and lower power consumption.

The big PC news at the moment is Intel's imminent release of their 4th-generation Core processor range (codenamed Haswell), the successor to Ivy Bridge. The launch is now officially confirmed for the Computex computer expo in Taiwan on June 4th, while the first chips from this SoC (System On a Chip) range to appear will be the Haswell-MB (MoBile/laptop) version for 'high performance notebooks'. The industry expects the lower power consumption of the improved 22nm manufacturing process to nearly double the battery life of Ultrabooks compared with Ivy Bridge versions, while improved onboard graphics performance and faster video coding/encoding should provide a significant boost in other departments. With Intel also mentioning that entry-level Ultrabook systems featuring Haswell CPUs will drop to $599 by this summer, this could help the current slump in PC sales nicely. 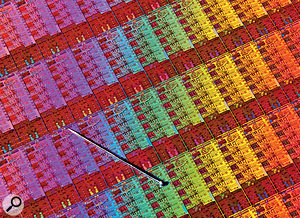 This is the size of the Haswell processors before divided from a silicon wafer, with a pin for scale.

Meanwhile — as usual — the new Haswell-DT (DeskTop) processor range will employ yet another brand-new socket design (the LGA1150), so there's no possibility of plugging one into any existing motherboard (boo hiss!). Instead ,you'll need to partner it with a new motherboard featuring Intel's new Z87 chip set. A few web sites are reporting rumours that these motherboards will drop PCI and SATA II 3.0Gbps support in favour of all PCIe slots and SATA III 6.0Gbps support. Considering that PCI slots first appeared around 20 years ago, this probably won't be much of a surprise, although some musicians with high-end PCI soundcards (such as Lynx Audio's Lynx Two and L22 models) may be disappointed. However, Intel's own DZ87KL motherboard does feature a single PCI slot, so nothing seems set in stone.

The best news is that initial audio benchmarks carried out by Scott Chichelli of ADK Pro Audio with an early engineering sample of the Haswell quad-core 4770K model are extremely encouraging for the musician. They suggest that running at its base 3.5GHz clock speed with audio interface buffer sizes of 128 samples and below (ie. low latency), it's at least 50 percent more capable than the current favourite CPU model for musicians, Ivy Bridge 3770K, running at exactly the same clock speed. It even approaches the performance of the current power user's favourite CPU: Intel's significantly more expensive Sandy Bridge hex-core 3930K running at its default 3.2GHz speed.

The 'K' suffixes all indicate an unlocked version that can officially be overclocked, and apparently the Haswell can also overclock well — although, as with early Ivy Bridge releases, they have been reported as running extremely hot as a result, so we need to wait and see how production samples test out before getting too excited. I do know that a few other specialist audio PC builders are already working with sample Haswell CPUs, but are currently gagged by Non Disclosure Agreements, but this situation does mean that Haswell audio PCs are likely to appear quite rapidly after the official launch. With pricing likely to range between similarly priced and slightly more expensive than Ivy Bridge, I can see Haswell-based PCs proving popular with musicians who have ambitious soft-synth and plug-in requirements.

Back To The Start 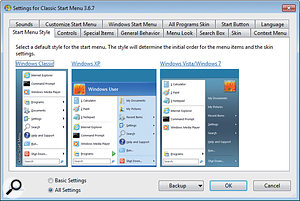 Still missing that traditional Start button on Windows 8? Travel back in time with the freeware Classic Shell.

After nearly two decades, Microsoft's decision to axe the Windows Start button and associated menu for launching apps, in favour of the Metro interface, didn't go down too well with all Windows 8 users. Thankfully, there are various free/donationware utilities that reinstate the traditional button/menu for those who are still lost without it, and with downloads of such utilities now reported as running into millions, you'd think Microsoft might take the hint. Rumours have indeed been circulating that the forthcoming Windows 8.1 update will include a Start button on the desktop. However, a source inside Microsoft has apparently said that this button simply returns the user to the Metro Start screen, which, if true, rather misses the point!

If you find yourself suffering from Metro frustration, here are a few utilities that can send your Windows experience back in time. In the words of the project itself, Classic Shell (www.classicshell.net) is "a collection of features that were available in older versions of Windows but were later removed”. It started life as a Windows Vista enhancement, and the latest version now works under Windows Vista, 7 and 8 in both 32-bit and 64-bit versions. It adds many optional usability enhancements to Windows Explorer, as well as offering three different styles of Start Menu. It also includes some very useful extras, such as a replacement Copy File dialogue for Windows Vista and 7 to avoid all those infuriating merge/replace choices, in favour of the familiar Confirm File Replace dialogue. The number of customisable options can be confusing, but there's no denying its versatility.

StartW8 (www.areaguard.com/startw8) is an altogether simpler utility, concentrating on reinstating the Windows Start menu for Windows 8, Pro or Server 2012, as well as letting you automatically switch to the traditional desktop interface immediately after signing in. Pokki for Windows 8 (www.pokki.com/windows-8-start-menu) is slightly different again, offering a new style of Start button/menu with the ability to pin and organise your files, apps, widgets, control panel and so on, making your PC look rather like a smartphone screen. If this emphasis on 'apps' appeals to you, Pokki even lets you download and install its own apps, including big-name options such as Twitter, Facebook and YouTube. I suspect some musicians will love this approach and others will hate it. However, all three utilities can be downloaded and tried out completely free, so you've nothing to lose by giving them a try!