Leaks from Intel indicate that an eight-core processor for the Haswell range is on the way, although, sadly, not until the second half of 2014. While Haswell has, thus far, offered modest performance improvements over Ivy Bridge, along with significantly lower power drain, this new Haswell-E (Enthusiast) device should take us into a new era of computing power for those musicians who simply demand to run more of everything with ever lower latency. With two more cores and, therefore, four more threads than previous hexacore CPUs, along with up to 20MB of Smart Cache and support for four-channel DDR4 2133 RAM, this octocore monster should perform somewhere between 33 and 50 percent better. Once again, we seem to be moving forwards by expanding sideways. 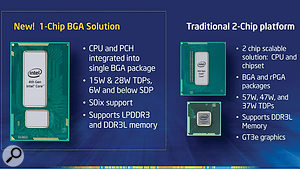 The fourth-generation Haswell CPUs and chip sets have been condensed into a single BGA (Ball Grid Array) package, and power requirements are now plummeting as well, with a 4.5-Watt device expected in late 2013 to use with fanless tablets.Meanwhile, those who demand incredibly long battery life from their laptops, along with blissful silence, should watch out for Intel's 4.5W Haswell CPU in forthcoming fanless tablet PCs later in 2013. Yes, you read that correctly; no cooling fans required at all!

As I write this, there's good news and bad news from Microsoft. Although they've reported a net income of $4.7 billion during their fourth quarter, sales of their Surface tablet seem to be disappointingly low. There have been large discounts on Surface RT pricing, with the 32GB version dropping by 30 percent and the 64GB model by 25 percent. In fact, Microsoft believe that their current inventory may never get sold in its entirety. Although official sales figures haven't been revealed, industry estimates are that Microsoft have so far sold around 260,000 Surface RT tablets, but a rather more impressive 750,000 Surface Pro models that can run standard Windows software. 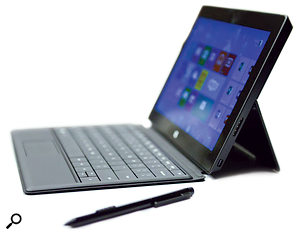 Microsoft's Surface tablet sales have been disappointingly low, although it's telling that the company have sold vastly more of the version capable of running standard Windows software.

Microsoft's profits from their Windows division have also dropped to half what they were a year ago, from $2.4 billion down to $1.1 billion, with the business side apparently showing a slight improvement, while the consumer side "remains challenged”. With Windows 8 still mired in controversy, newly promoted Chief Financial Officer Amy Hood has gone on record as saying, "We know we have to do better. We are confident we are moving in the right direction”. However, with the PC market currently shrinking, I don't envy them their journey. Mind you, this PC slump isn't confined to Microsoft: AMD, Intel and many other companies are also suffering as the tablet and smartphone oust the desktop, and portability and price become more important than computing power.

In other Microsoft news, it was confirmed at the Microsoft Build developer conference in San Francisco in the final days of July that the Windows 8.1 update will be released to manufacturers in August, and available to Windows 8 owners as a free downloadable upgrade in September or October. There will also be a Windows 8.1 RT version. Microsoft's Steve Ballmer is quoted as saying that with Windows 8.1 they were "refining the blend” between the desktop and Modern UI interfaces, and that a lot of its enhancements have been designed to make the change between the two interfaces far less jarring. However, he also admitted that "the interface changes won't please everyone ... if you were hoping for the Windows 7 Start menu back.” Nevertheless, massive applause greeted his announcement that a boot-to-desktop feature will be in the final build.

If you're still not convinced that touchscreens are the ultimate interface for you, or you love them but are suffering with back pains after repeated 'bowing' during touchscreen activity, you might like to investigate the just-released Leap Motion controller (www.leapmotion.com). It works alongside your existing keyboard, keypad, mouse, stylus or trackpad, costs just $79.99, and plugs into any USB 2 port. Once its tiny 3 x 1.2 x 0.5-inch sensor is sitting on your desk beneath your hands, it senses how you point, wave, reach and grab with them. Technically, it operates within eight cubic feet of 3D space, but can allegedly track all 10 of your fingers with an accuracy of 100th of a millimetre at over 200 times per second.

So, it's perfectly possible to move both your hands within this field and use its accompanying software to translate those moves into screen actions. You can, for instance, draw and paint with it, and use it for browsing and playing games. What particularly caught my attention is that you can also use it to "pick, pluck , strum, and drum. Play air guitar, air harp, air everything”. PC users will simply need Windows 7 or 8, 2GB RAM and a spare USB 2 port, while developers can get an in-depth SDK and support to help with adapting their software. It's very early days, but it will br interesting to see which, if any, audio and MIDI music applications get support, and how usable and precise the Leap Motion controller is in practice.