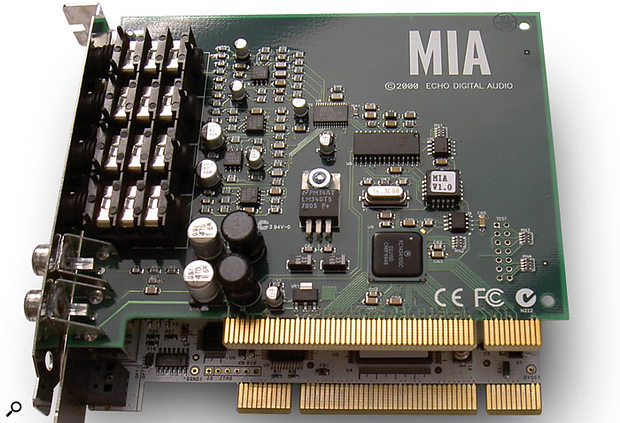 If your soundcard edge connector looks like that of Echo's Mia, shown here, it may or may not work when plugged into a modern PC motherboard featuring PCI version 2.3 expansion slots. If, on the other hand, it's a 'Universal' card with both 5V and 3.3V notches, like ESI's Julia, shown underneath, it should always work.

Your much-loved elderly PCI soundcard may be working perfectly, but might still have to go on the scrapheap if you upgrade your PC. Why? It's all down to the PCI specification and the location of your notches...

With more and more musicians buying or building new PCs to take advantage of new features such as dual-core processing, some are frustrated to find out that their old but trusty PCI soundcards no longer function at all when plugged into their modern motherboard. The problems revolve around the PCI (Peripheral Component Interconnect) specification, which has undergone various revisions over the years. Unfortunately, it can be a bit of a minefield trying to establish which soundcards will work with which motherboards, so this month I'm going to provide some background information that should set the scene and help you to work out whether your soundcard is likely to be a casualty if you upgrade your motherboard.

As I explained in PC Notes December 2004 (www.soundonsound.com/sos/dec04/articles/pcnotes.htm), the PCI specification defines two basic types of expansion connectors that may be found on a motherboard: one for systems with 5V signalling levels, and the other for systems using 3.3V signalling levels. Signalling specifies the voltage level of the various clock and timing signals, but not necessarily the power supply voltage, so a particular card may require both 5V and 3V power supplies, irrespective of its signalling-level voltage.

As you can see from the photograph above, the more common 5V PCI cards, such as Echo's Mia, have a notch in their edge connector furthest away from the backplate, while the newer 3.3V expansion cards have a notch much closer to the backplate, and so-called Universal PCI cards (such as ESI's Julia, shown underneath the Mia) include both notches, so they can be plugged into either 3.3V or 5V expansion slots. The expansion slots themselves include corresponding keys to prevent you plugging in the wrong type of card.

Motherboards in PCs bought a few years ago (such as the Asus P4P800 Deluxe motherboard in my old Pentium 4 2.8GHz computer) will probably have PCI version 2.2 expansion slots. These support both 5V and 3.3V expansion cards, and hence the vast majority of soundcards. However, when the PCI specification was updated to version 2.3 in 2002, while it continued to support both 5V and 3.3V keyed-system board connectors, it ceased supporting cards that require 5V signalling, only supporting 3.3V and Universal expansion cards. This means that although the PCI expansion slots in a new computer may look identical to those of your previous PC, and physically accept 5V-only cards, if the motherboard is running PCI version 2.3, only cards that can run on 3.3V signalling levels will actually work — most confusing!

Revision 3.0, introduced in 2004, takes the next step of removing support for the 5V keyed-system board connector altogether, but is not yet widely seen on motherboards. You can find out what PCI version your motherboard has using utilities such as Sisoftware's Sandra (www.sisoftware.co.uk), by opening the 'Buses and Devices' applet in its Hardware page.

What Does It Mean?

So what, in practice, does all this mean for the average musician? Well, if you have a PCI soundcard that has two notches in its edge connector (the Universal type), you can be confident that it will both fit into and run successfully on the vast majority of modern motherboards. If, on the other hand, you have an elderly PCI soundcard (pre-2002) with a single 5V notch, it may or may not work. As an example, although my Echo Mia card only has a 5V notch, according to the Echo web site (www.echoaudio.com/Support/FAQ.php), all of Echo's PCI products are in fact compatible with 5V PCI, 3.3V PCI and PCI-X connectors, and will thus work with modern PCI 2.3 motherboards. However, someone recently posted on the SOS Forum that while he could physically install his elderly MOTU PCI 324 card in his new dual-core PC, the card wasn't recognised (MOTU do state that it's a 5V-only card on their web site, and that PCI 324 owners can upgrade to the newer PCI 424 card, as they can to the latest PCIe 424 model). Meanwhile, with his Yamaha DS4126 DSP Factory pushed into an expansion slot this new PC wouldn't boot up at all (a similar fate befalls Yamaha's SW1000XG card). The reason for these problems is that all three cards are 5V only.

So if you're trying to track down compatibility information for an elderly but still loved soundcard, look for references in its specification to 5V, 3.3V or the required PCI version. For example, a visit to the Lynx web site (www.lynxstudio.com) showed that while the newer Lynx Two, L22 and AES16 soundcards all have twin notches, the older Lynx One has a single 5V notch and requires a PCI buss that's 'Version 2.1 compliant', meaning that it will only run with 5V slots and not with the latest motherboards. If you can't find the information you need, a quick email or telephone call to the soundcard manufacturer should provide the answer.

As a breed, convolution plug-ins are understandably popular at the moment, since they can provide incredibly realistic reverb treatments, plus shorter, reverb-like decays captured from loudspeaker cabinets, instrument body resonances, and even the static frequency responses of gear such as microphones, preamps and hardware EQs. What simple convolution plug-ins can't do is capture an effect such as compression or distortion, whose sound varies with input level.

They said it couldn't be done, but that hasn't stopped Acustica Audio from developing Nebula 2 Free, a convolution-based plug-in that can capture and reproduce cyclic effects such as chorus, phasing and flanging.One way around this limitation is to use the patented dynamic convolution process, where you morph between a set of impulse responses captured at different input levels (as used in Focusrite's Liquid Channel and Liquid Mix hardware). However, even dynamic convolution can't reproduce effects that vary over time, such as phasing, flanging and chorus. So when newcomers Acustica Audio (www.acusticaudio.com) pop up and offer us a free plug-in that not only features captured real-world EQs, classic mics, analogue preamps and reverbs, dynamic effects such as compression and tremolo, and also 'time-variant' treatments such as chorus, flanging and phasing, we should probably sit up and take notice.

Nebula 2 Free uses a convolution technique named 'Diagonal Volterra Kernels' that has been heavily researched by Italian Professor Angelo Farina (who also worked with Waves on their IR1 capture techniques and created the Aurora impulse response plug-ins for Cool Edit/Audition). Acustica Audio have drawn on Professor Farina's research to create their plug-in.

Diagonal Volterra Kernels are tiny instantaneous snapshots of real-world effects, and much as graphic packages such as Photoshop can sharpen the edges of images by altering the brightness of each pixel depending on the brightness of a small array of other pixels around it, inside Nebula 2 Free the convolution kernel treats each group of samples in the input signal in turn, to modify their values depending on the samples before and after, morphing them in real time.

Nebula processes lots of these tiny kernels at once, using its kernel engine, and then (similar to how wavetable synths can scroll through an array of slightly different waveforms to morph them) uses a 'vector engine', controlled by LFOs, envelopes, and so on. If, for instance, the position in the kernel array is chosen depending on the input level of the signal, you can reproduce level-dependent effects like compression, or a preamp that gradually distorts, while if you scroll backwards and forwards through a kernel array using an LFO, you can reproduce cyclic sounds like chorus or flanging. Now, enough of the theory...

Proof Of The Pudding

I downloaded the free teaser version of Nebula 2, which offers a small collection of free library sounds but no capture functions and limited editing possibilities. The graphic interface mimics a hardware synth or sampler, with meters and faders on the left, a large 'LCD' in the middle, and eight 'soft' faders whose function depends on which treatment you've loaded. Two versions of the plug-in are supplied: one optimised for 'short' treatments such as EQs, preamps and compressors, and a 'reverb' version to handles reverb, flanger and chorus effects.

The free presets include a mic, analogue channel, EQs and filters, a clutch of hardware reverbs and a classic plate treatment, plus a selection of chorus and flange effects. These are very useful in themselves, but also prove how well Nebula actually works, while almost guaranteeing a healthy uptake for the full Nebula 2 version when it's released.

Nebula 2 will have a much larger library, and will offer editing and saving of user presets, a comprehensive synth engine, full parameter automation, 'smooth' options for a more transparent sound, and user-capture functions courtesy of its Deconvolver utility. Nebula 3 is also planned for later, featuring greater EQ precision, more efficient and versatile distortion kernels, and a second 'LCD' above the sliders that shows what each parameter currently does.

The 'free' treatments themselves are well worth downloading. Cyclic effects such as tremolo, chorus and flanging each have Rate controls (the Deconvolver utility finds the loop point during the capture process, and you can use Nebula 's internal LFO to move backwards and forwards through this loop at any desired speed). The Compressors provide Attack, Release, Threshold and Ratio controls, and the Analog Channel nicely demonstrates dynamic distortion characteristics.

This early (and admittedly free) release gives rise to a few frustrations that I hope will be solved in the retail version. Nevertheless, the results are truly impressive for a free plug-in. I've been allowed to see what's in store in the full versions of Nebula, so I can also tell you that there are already many more 'name' EQs, preamps, tube amps, hardware multi-effects, and even a summing amp, to come. We'll be reviewing the retail versions in SOS as soon as they appear, but I suspect they will be incredibly popular at likely retail prices of about 20 Euros for Nebula 2 and 80 Euros for Nebula 3.