Q. Can I comp together tracks from different takes? Skip to main content

Q. Can I comp together tracks from different takes?

I've not used the group editing feature of Cubase 6.5, having only recently come over to this version from Cubase SX3, but Matt Houghton mentions in the June 2012 issue of SOS (/sos/jun12/articles/cubase-6-5.htm) that the combination of group editing and comping can help a lot with editing multi-take, multi-part background vocals.

However, in a YouTube tutorial video I came across (Cubase 6 Tutorial Level 1 — Group Editing, found at www.youtube.com/watch?v=7UDdKgxfMeA) it is mentioned that group editing is "not meant to combine different tracks from different sessions”. But isn't comping of background vocals by definition working with tracks from different sessions? How do I reconcile that statement from the video with what Mr Houghton writes?

I'm clearly having trouble visualising how to use group editing with the comp tool for background vocals. Could you give me an idea about how I might approach this?

SOS Reviews Editor Matt Houghton replies: I hope you got something from the review. As I said towards the end, it really feels, to me, as though the latest incarnation of Cubase is reaching maturity. There are only a handful of gripes and wish-list features for me now, but nothing worse than I'm aware of in any other DAW.

When I talk about 'multi-part' vocals, I mean, for example, four-part harmony backing vocals with each singer singing a different 'part' into their own mic. You record each part to a separate track simultaneously from one performance, and record several passes to obtain the best 'take'. You can then comp the best overall backing vocal take using Group Editing and the Comp tool. It all worked fine for me during my tests. 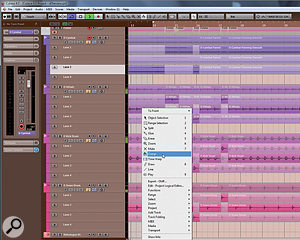 Unless you want to chop up your tracks and 'fake' a decent take, the Comp tool in Cubase 6.5's group editing feature should be all you need to create a great overall take from different parts. We're talking here about multi-part backing vocals, for example, where multiple performers are being recorded at the same time onto different tracks.

The point made on the video is different. It's suggesting that each of the equivalent takes on each track must be from the same performance. It's easy to find yourself getting this wrong if you inadvertently click and drag a part from one lane to another (for example, imagine that take one of an inside kick mic is on lane one of one track, but the outside kick mic from the same performance is on lane two of another track).

Actually, you can work with group editing from entirely different performances if you really want to fake things up by dragging and dropping parts on to the relevant lanes. But you have to put a bit of work in to make sure everything's on the right lane in each track, and that the parts are of the same length and start and end at the same points (easy enough with the Split Loop command, or with Scissors and Snap To Grid).