Q. Can I create a studio in a shipping container? Skip to main content

Q. Can I create a studio in a shipping container?

I've seen shipping containers used on building sites for various purposes, and it got me wondering about putting a little project studio into one.

Has it been done? Obviously, a big, ambient drum sound isn't going to be possible, but a vocal booth is viable. Monitoring would be an issue obviously, too, but not much more so than in a lot of peoples' spare rooms.

SOS Technical Editor Hugh Robjohns replies: Anything is do-able, given enough funding, and if transportability is important, building a studio inside a shipping container is certainly possible. There are commercial companies already offering this kind of thing, and the major-league coachbuilders who specialise in TV outside broadcast trucks and the like would be able to offer something quite imaginative and effective. It would also be possible to do as a DIY thing if you had the skills, tools, time and budget, but I don't think it would be cheap or easy. 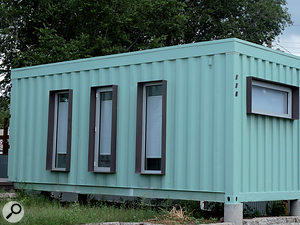 People have used shipping containers for all kinds of things, and one could, indeed, be used as a studio! However, unless you specifically wanted it to be easily transportable, the amount of work that would be needed to make such a container into a usable studio would probably be excessive.

The obvious size constraints might be an issue, not to mention the need to control the inevitably very dominant room modes. The steel shell would also need serious treatment, to control the inherent structural ringing and the relatively low mass, which would affect the transmission of sound in and out, so multiple layers of inner wall linings with Rockwool and plasterboard would be a must. OB trucks often resort to lead sheeting or other very heavy materials to provide sufficient mass!

It can all be done, of course, but at the end of the day I think I'd rather spend my money on a more conventional block-built building, which would be easier to use, could be designed with more appropriate dimensions, and could probably constructed for less — unless I wanted to be able to transport the thing at some future time, of course.