Q. Can I get rid of string buzz? Skip to main content

Q. Can I get rid of string buzz?

I've got a recording of an acoustic guitar that I'm loath to re‑record, but there are several sections in which string buzz is clearly audible. Can I remove this with a bit of clever processing?

SOS contributor Mike Senior replies: As far as after‑the‑fact mix processing is concerned, I'm not sure I can think of any decent way to remove string buzz, I'm afraid. The problem is that, unlike a lot of other mechanical noises the guitar makes, there's not really any way to get independent control over it with normal plug‑in processing. (I suspect that even high‑end off‑line salvage tools such as CEDAR's Retouch might struggle to make much of an impact with this, in fact.) In the case of pick noise, for example, the transient nature of the noise means that it can be effectively targeted with transient‑selective processors such as SPL's Transient Designer or Waves' TransX Wide. For fret squeaks you can use high‑frequency limiting, or simply an automated high‑frequency shelving EQ to duck the high end of the spectrum briefly whenever a squeak occurs, because such noises are usually brief and occur as the previously played notes are decaying (therefore having less high‑frequency content to damage). String buzz, on the other hand, isn't transient by nature and usually happens most obviously at the beginnings of notes, where the noise spectrum is thoroughly interspersed with the wanted note spectrum. 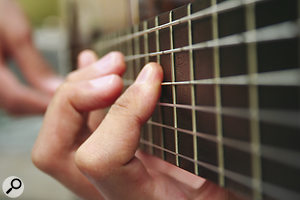 It's relatively difficult to fix fret noises with processsing, due to the very specific nature of the transients produced. For this reason, it's always advisable to record several takes of an important guitar part.

All is not lost, however, because you still may be able to conjure up a fix using audio editing if your recording includes any repeated sections and the string buzz isn't common to all sections; you may be able to just paste clean chords or notes over the buzzy ones. The main thing to remember is to try to put your edits just before picking transients if possible, to disguise them, but you should also be careful that all notes sustain properly across each edit point too, because you may not have played exactly the same thing every time. If you know that string buzz is a problem for you, I'd recommend doing several takes of guitar parts, as this will increase your editing options. If the guitar part is important enough that a bit of string buzz really matters, you should probably be comping it anyway, to be honest, if you're after commercial‑sounding results.