Q. Can I plug my keyboards into my audio interface's line-level inputs? Skip to main content

Q. Can I plug my keyboards into my audio interface's line-level inputs?

I am looking for a USB audio interface that I can connect all of my instruments to, and I have been considering a Focusrite Scarlett 18i20. I have an electric guitar, an electric mandolin, a Hammond SK1 organ and a Roland Gaia synth, and I would like to connect them all to the interface simultaneously, which shouldn't be a problem as there are enough inputs for this. However, in the interface manual it says that instruments can only be plugged into inputs 1 and 2 directly. If I wanted to connect all of the above instruments, can I do that directly or will I need some DI boxes? If so, how many would I need? The Hammond requires two inputs (L+R stereo) and the Roland requires another two (L+R stereo again). Would each line require its own DI box?

SOS Technical Editor Hugh Robjohns replies: The answer to this question isn't quite as straight forward as it appears, but you really won't need the DI boxes you're worried about. Here's why...

First, the 18i20 has two combi sockets on the front, marked 'mic-line-inst'. The centre jack sockets in these two connections are presented to high-impedance instrument inputs which are intended specifically for receiving the signals from electric guitars and similar instruments. Depending on the actual impedance, which doesn't appear to be stated on the web site or in the manual, it may not be ideal (high enough) for the mandolin if that uses piezo pickups, but you should just try it and see. It's probably going to work just fine!

The rear-panel has more combi jacks, which are labelled 'mic-line', and you can connect your keyboards here. The keyboards both output something close to line-level outputs, so you can connect them directly as line-level inputs to the Scarlett using ordinary jack cables. 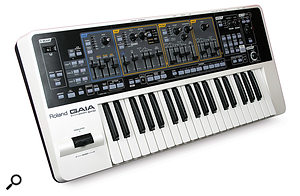 The output of most synths and keyboards like this Roland Gaia, for example, will work fine with most audio interface line inputs, without the need for a DI box. output and knocks it down to a balanced mic level which you can then connect to a mic preamp, while also separating the source and destination grounds. It's a very convenient solution for stage use, but unnecessary for most studio applications, and potentially degrades the keyboard signal when there's no need!

In a perfect world, plugging the keyboards straight into the Scarlett's line inputs would work fine. But the world ain't perfect, and while this may well work fine — and is certainly worth trying — you may find that you end up with an annoying low-level hum or buzz caused by ground loops, because we're dealing with unbalanced connections.

If either of the keyboards has a 'double insulated' (class 2) power supply, there won't be a problem with ground loops anyway because it doesn't have a mains safety earth to create the ground loop. If they have normal earthed (class 1) power supplies, then you can minimise the likelihood of ground loops by making sure that the keyboards are powered from mains sockets adjacent to the Scarlett's power supply.

If you still have an audible ground-loop problem then the most cost-effective solution is to head over to the SOS shop (/shop) and purchase a pair of pseudo-balanced cables for each keyboard — one cable for each of the left and right channels. This might seem like shameless promotion of our wares, but these are unique to SOS and break the ground loop in quite a clever way by using the balanced line input of your interface. They're available with either TRS or XLR plugs at the balanced interface end, and have a normal unbalanced jack plug at the instrument end — and they cost a heck of a lot less than a decent DI box or line isolation box, which would be the other solution. In your situation, I'd suggest that the TRS version is the most appropriate.

But first, try plugging the keyboards in to the line inputs with ordinary unbalanced TS jack cables; there's no point spending money if you don't need to!