Q. Do I need a powerful PC to use Acustica Audio Nebula? Skip to main content

Q. Do I need a powerful PC to use Acustica Audio Nebula?

I've tried Nebula (with Reaper) and, sonically speaking, I really like what it can do, but the best libraries have my computer creaking at the seams! What specification of PC do I need to use multiple instances of Nebula without having to worry about processing power?

SOS contributor Martin Walker replies: There's no denying that Nebula has evolved into the enfant terrible of the plug-in world. Some users find it difficult to adapt to its careful gain-staging requirements, while others fall in love with the 'expensive hardware' sound it promises to give you at almost pocket-money prices. As you say, running multiple instances can bring even a powerful PC to its knees, but before you start looking to upgrade to a new PC, there are various things you can do to minimise the CPU and RAM drain.

First, by all means load your Nebula programs into the standard Nebula 3 plug-in for low-latency tracking purposes, but during mixdown use the Nebula 3 Reverb plug-in instead. Although it has higher audio latency (defaulting to an acceptable 26ms at 44.1kHz or 11.9ms at 96kHz, both of which are automatically compensated for by most DAWs), its CPU overheads are less than half, and it also offers slightly better audio quality.

Second, use your ears when auditioning the various quality options provided in many Nebula libraries. Although it's tempting to always choose 11-kernel versions that model the fundamental frequency along with the first 10 harmonics (each consuming its own portion of CPU), some developers are, in my opinion, too enthusiastic about capturing every last detail, even when the higher harmonic contributions are vanishingly small. High-end preamps, EQs and the like often rarely have much to offer above perhaps 4th or 5th harmonic distortion, so if you can't hear any difference between the five-kernel and 11-kernel versions of a particular preset, choose the five-kernel version — this one decision will halve your total CPU overhead.

When it comes to the PC spec itself, Nebula 3 is now optimised for fourth-generation (Haswell) processors, so a machine based around an Intel quad-core 4770K is likely to give you better performance than a more expensive third-generation model such as the six cores of the Intel 4930 processor. As for RAM, 16GB is a sensible amount to install in a Nebula monster PC, as its libraries can be enormous, and they 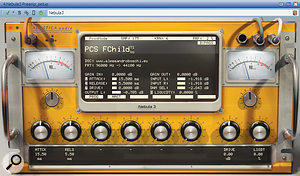 Well-behaved Nebula libraries (like this Fairchild preamp from the AlexB Preamp Colours & Saturation collection) keep CPU overheads down by only modelling those harmonics that can actually be heard (in this case it uses just six 'kernels'). in turn are best installed on a dedicated SSD if you want to minimise program loading times.

Yet another approach is to buy the Nebula Server version, which spreads the CPU/RAM load across networked computers, or the Local Server version that offers a low RAM-usage mode if you want to run multiple instances of the same program across each track of a large mix — each instance of the same preset shares the same RAM.

If you can't afford a PC powerful enough to run as many instances of Nebula as you'd like, a different approach is to use Franci Zabukovec's NebulaMan utility (http://zabukowski.com/software/?page_id=26), which is available for both PC and Mac. Effectively this stand-alone batch-processing utility lets you apply a Nebula program or FX chain (such as a channel strip) to each and every audio track in your project in off-line mode, to add (for instance) the cumulative analogue flavour of a large mixing desk. You can process many hundreds of audio files quickly, and then reload the entire project into your favourite DAW to hear the results. It may not be real time, but you can finally experiment with truly extravagant suites of analogue excellence even on a modest computer!

SOS Reviews Editor Matt Houghton adds: As computing power grows, I'm sure thirstier Nebula libraries will consume it, and you'll probably never have quite enough power available to do what you want! Martin mentions the NebulaMan utility, and for me that's the best way to save precious resources when working with Nebula. I've been doing a similar thing, but instead using Wavelab to do the batch processing.

Your DAW, Reaper, also offers the option of applying whole plug-in chains as a batch process (go to File / Batch file / item converter), so you could easily give it a try. Use Nebula to process all the tracks in your project with your choice of preamp and/or analogue tape presets before you start mixing, and import the different treatments as different 'takes' to choose between in your DAW. It's very easy to apply, say, an API preamp to every track, then do the same with a Neve preamp, and leave the final choice for any given track between these two (as well as the unprocessed version) until you mix.

I tried this out on a recent project and was struck by the difference it made when changing the selection from Clean to API to Neve for all the drum multitracks — they all 'worked' but each had a certain character. Note that you'll need to have recorded the parts very cleanly to gain any real advantage from this approach.