Q. Do I need to use professional mastering? Skip to main content

Q. Do I need to use professional mastering?

I often hear people saying that you have to have tracks mastered professionally, and that it's not something you can do yourself. Is this really true and, if so, why?

SOS contributor Mike Senior replies: There are two points at issue here, so let's deal with them one at a time. Firstly, do you need professional mastering? This is a moot point for many musicians and engineers. A lot of home recordists seem to think of mastering as some near-magical process that will transform the sound, and although decent mastering houses will usually improve an unmastered mix's sonics, the scale of this change is almost always very small, in my experience. This is something that come through strongly during our on-line mastering shootout back in SOS March and April 2006 (read the results in full at /sos/mar06/articles/onlinemastering.htm and /sos/apr06/articles/onlinemastering.htm). Basically, if your mix doesn't already sound finished to you, mastering is very unlikely to remedy that significantly, certainly as far as the average record-buying punter is concerned. 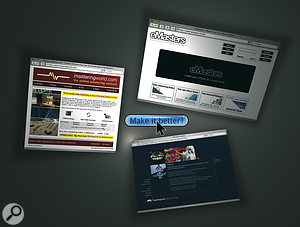 Our mastering shoot-out in SOS April/March 2006 suggested that if you're hoping mastering will bring about big sonic changes, you may be disappointed!

A much more important role of the mastering engineer, as I see it, is in giving you the benefit of an additional set of (hopefully!) experienced ears when making decisions about whether your track's tonality and dynamic range conform to market expectations, and in processing your track with high-quality specialised equipment, to make any necessary adjustments. And, of course, if you're compiling a whole album of tracks, a decent mastering engineer will also be able to adjust track processing, fades and inter-track gaps, in order to create a coherent-sounding album. This is a highly refined task, and especially difficult if multiple different producers or mix engineers have been involved in the project.

The second, slightly different question is can you do mastering for yourself? Decent software audio editing and loudness processing is widely available now, so many people do decide to go it on their own completely. The technicalities of adding CD subcode information, such as PQ and ISRC codes, aren't particularly stressful with most decent audio editors, and small-scale duplication houses will usually accept a master Red Book-format CD-R for duplication purposes, which is easy to create on almost any computer. Beyond that, it's primarily a question of whether your monitoring facilities are up to scratch (usually not in most small studios), whether your processing software is sufficiently high quality, and how you go about the task. The most successful home-brew mastering jobs tend to be achieved when the engineer takes enough time to compare their work against a range of relevant commercial masters, and verifies all decisions in a representative range of different listening situations.