Q. How can I achieve clarity in my mixes? Skip to main content

Q. How can I achieve clarity in my mixes?

I have noticed that, when matching up my tracks with more professional productions, my songs are lacking a certain clarity. For example, I almost always have to turn up the high EQ on my mixer just to get the highs sounding more prominent when matched up with other tracks. (You can hear some example of my tracks at www.bigcontact.com/mikebeeds.) I'm guessing it could be a number of things. For one, my monitors aren't the best in the world, so would you suggest that I get monitors with more dynamic range? Some people have suggested that the cone size of the speaker (five‑inch versus eight‑inch) can make all the difference when hearing the mix. Or could it be that I am not using a high‑pass filter? At this point, I have no idea how to use this filter, but I've read numerous times in tutorials and books that it's very useful for giving a track more clarity. Any help would be greatly appreciated!

SOS contributor Mike Senior replies: Clarity is one of the hardest things to achieve when mixing, because it derives from a complex combination of many different arrangement, audio‑editing and processing techniques. You're right in thinking that your monitoring can make a difference, but I don't think that a change from five‑ to eight‑inch drivers will make an enormous impact on the quality of your mixes, to be honest. If you've got some money to spend, put it into acoustic treatment first, including bass trapping, and then maybe look to upgrade your monitors to something more full‑range — perhaps something with a separate subwoofer. (There was lots of information about DIY acoustic treatment back in our special acoustics issue in SOS December 2007, if you need some advice on that front.) 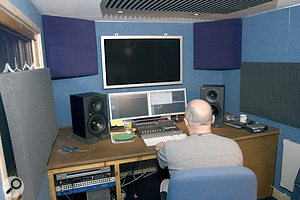 Upgrading to monitors with larger drivers is unlikely, in itself, to have a huge impact on the clarity of mixes carried out on them. It'll be more effective to first invest in some acoustic treatment, if your room currently has none.

Other than monitoring issues, there are a few quick tips I can suggest from listening to the tracks on your site. You already mentioned high‑pass filtering, a mixing process that effectively just cuts away the low end of any given track below a specified frequency, and that is indeed a very useful tool for clearing out the kind of clutter from the low end and mid‑range of your mix that tends to lead to poorly defined sounds. In fact, if you're working on small monitors in a domestic environment without any acoustic treatment, it's not a bad idea to high‑pass filter everything except the lowest bass instruments, raising each track's filter in turn while listening to the whole mix and aiming to go as high as you can without losing anything important. That way, you're sure to scotch any rogue sub‑bass information that might otherwise eat up your mix headroom. I reckon you should probably pay particular attention to your pad sounds, as these are very full‑sounding in the tracks I've listened too, and seem to be the prime culprits. If you want them to be that warm‑sounding to start with, all well and good, but when more interesting things come along in the mix, start rolling off some low end from the pads.

Your bass is another instrument that is reducing clarity, because it's quite thick‑sounding in the 200‑600Hz region, where it's overlapping a great deal with the pads and various other instruments. A well‑placed EQ cut could work wonders there. If the bass isn't then audible enough in the mix, you could try layering a second, quieter but brighter synth sound an octave higher over the bass, to add more higher mid‑range to the line, and that should get it to cut through more.

You're using a lot of reverb in the mixes to give a lush sound, and although this is perfectly in keeping with the style, it can make it difficult to keep individual sounds distinct. First off, don't bother adding much, if any, reverb to the pads, as pads rarely need reverb and it'll take up too much of the space in your mix. Where you do use reverb on any instrument, take some time to EQ the reverb return in each case, at least high‑pass filtering in order to keep the low end from sludging up. There's usually little to be gained from adding reverb to low‑frequency instruments such as bass and kick drum anyway, but even the more mid‑range instruments will send enough low frequencies into your reverbs to cause problems. Finally, I'd also experiment with swapping some of the reverb for tempo‑synchronised delays, which can sound equally lush (and also nicely rhythmic), but which won't obscure other instruments as readily.