Q. How can I achieve a ‘dry’ sound? Skip to main content

I record and mix in my 'studio', which isn't too great acoustically. I can manage somehow when mixing, by working on headphones and doing lots of cross‑referencing, but the problem is that when it comes to recording I really hate the room sound on my vocals, and most of all on acoustic guitars, which I use a lot. The reverb tail is pretty short, but I'm still having a hard time getting a nice dry sound on my guitars, because I can't record dry! I know that the obvious solution is to treat the room, but the truth of the matter is that I can't do much better than this for now. So is there any way to treat a 'roomy' sound (on vocals and guitar) to make it sound drier? I know it is very difficult, or maybe impossible, especially for acoustic guitars, but any kind of suggestion, even for small improvements, would be very welcome. 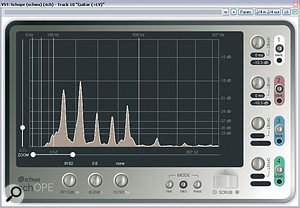 A high‑resolution spectrum analyser such as Schwa's Schope lets you quickly and precisely home in on specific resonant frequencies that may be responsible for a coloured or uneven sound.

SOS contributor Mike Senior replies: Given that the reverb doesn't have a 'tail' as such, I reckon it's the reverb tone that's the biggest problem, so trying to use some kind of gating or expansion to remove it is unlikely to yield a useful improvement. You could help minimise the ambient sound pickup by using a directional mic for both vocals and guitar and keeping a fairly close placement. For vocals, very close miking is pretty commonplace, but for acoustic guitar you might want to experiment with using an XY pair of mics instead of a single cardioid, to avoid 'spotlighting' one small area of the guitar too much. That setup will usually give you a more balanced sound because its horizontal pickup is wider than a single cardioid on its own. In all but the smallest rooms, it's usually possible to get a respectable dry vocal sound just by hanging a couple of duvets behind the singer, and because I suspect that you've already tried this fairly common trick, I'm suspicious that room resonances are actually the biggest problem, rather than simple early reflections per se. Duvets are quite effective for mid‑range and high frequencies, but aren't too good at dealing with the lower‑frequency reflections that give rise to room resonances.

So given that room resonance is likely to be the problem, what can you do about it? Well, if you've no budget for acoustic treatment, I'd seriously consider doing your overdubs in a different room, if there's one available. If you're recording on a laptop, or have a portable recorder, maybe you can use that to record on location somewhere if you're confined to just the one room at home. I used to do this kind of thing a lot when I first started doing home recordings, carting around a mic, some headphones and a portable multitrack machine to wherever was available.

Part of what the room resonances will be doing is putting scary peaks and troughs into the lower mid‑range of your recorded frequency response, but the exact frequency balance you get will depend on exactly where your player and microphone are located in relation to the dimensions of the room, so a bit of determined experimentation in this respect might yield a more suitable sound, if not quite an uncoloured one. You might find that actually encouraging a few more high‑frequency early reflections using a couple of judiciously placed plywood boards might also improve the recorded room sound a little. A lot of domestic environments can have a bit too much high‑frequency absorption, on account of carpets, curtains, and soft furnishings.

After recording, you could also get busy with some narrow EQ peaks in the 100‑500Hz range, to try to flatten any obvious frequency anomalies. One thing to listen for in particular is any notes that seem to boom out more than others: a very narrow notch EQ aimed precisely at that note's fundamental frequency will probably help even things out. You can find these frequencies by ear in time‑honoured fashion by sweeping an EQ boost around, but in my experience a good spectrum analyser like Schwa's Schope plug‑in will let you achieve a better result in a fraction of the time. However, while EQ may address some of the frequency‑domain issues of the room sound, it won't stop resonant frequencies from sustaining longer, which is just as much part of the problem, and there's no processing I know of that will deal with that.

For my money, this is the kind of situation where you can spend ages fannying around with complicated processing to achieve only a moderate improvement, whereas nine times out of 10 you'll get better results much more quickly by just re‑recording the part.