Q. How can I expand my Firewire connectivity? Skip to main content

Q. How can I expand my Firewire connectivity?

I have several UAD1 DSP cards in my current PC, leaving just one spare PCI slot, and need to connect some extra devices via Firewire. If I buy a three‑port Firewire PCI expansion card, will this let me run three devices with each up to the full Firewire 400 bandwidth, or will this be shared between the three ports?

SOS contributor Martin Walker replies: It's safe to say that the world of Firewire connectivity is a bit of a minefield, as many musicians have found to their cost. Your PC motherboard will incorporate a 'southbridge' chip in charge of I/O operations, and its total bandwidth is shared among the SATA, USB, Firewire, PCI, PCI Express and other ports on the computer. Even if your computer already features several Firewire ports, the chances are that they will share the same bus, and therefore the 400 Megabits per second bandwidth. 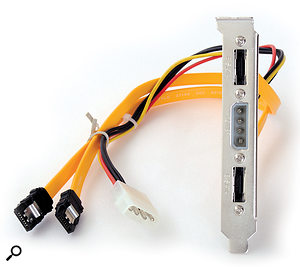 Rather than buying a Firewire expansion card, you could free up a Firewire port by replacing your Firewire drive with an eSATA model. This measure allows the drive to take advantage of the higher eSATA bandwidth of 2400Mbps, as well as opening up a Firewire port for use by an audio interface or DSPprocessor. If you don't have an eSATA port, a low‑cost card such as this one can add it.Each Firewire port expansion card you add should give you a further Firewire bus with its own 400 Mbps bandwidth. However, although the PCI or PCIe buss that the card connects to has sufficient bandwidth to run multiple ports, each with 400Mbps bandwidth, I've never seen a multi‑port Firewire card with independent controllers for each port. Instead, whatever combination of ports is offered by the card will share the 400Mbps bandwidth of its single Firewire controller.

You might think that buying an expansion card featuring Firewire 800 ports would provide twice the bandwidth to share between the ports, but as RME discovered (www.rme‑audio.com/english/techinfo/fw800alert.htm), some of these cards don't work properly at higher FW800 speeds, due to cost cutting or poor design. MOTU and PreSonus both also specifically advise against 'combo' cards featuring both Firewire 400 and 800 ports for various reasons, so I suspect that your safest bet is to stick to Firewire 400 expansion cards or a recommended FW800‑only card.

Many musicians are tempted to daisy‑chain multiple Firewire devices from a single Firewire port, but this will also mean they are sharing its finite bandwidth. To relieve the combined load, consider instead buying an eSATA‑equipped external hard drive, since this will leave the full FW bandwidth for a Firewire audio interface or DSP processor, while the external hard drive will be able to benefit from the higher bandwidth (2400 Mbps) of the External SATA port. If your PC already has an eSATA port, use that; otherwise buy a cheap eSATA card in PCI, PCIe or Express Card format as required.

Although you have a desktop PC, it is also worth noting here that many modern PC laptops do not work well with Firewire audio devices, even if they have the widely recommended Texas Instruments Firewire controller chip. Tracking down a suitable PCI Express Firewire expander card can also be difficult, with many users finding they get either constant digital noise from their FW audio interface, or that it isn't recognised at all. The latest Macs have also dispensed with Firewire ports altogether, and some musicians are transferring their affections to USB 2.0 devices to avoid all the aggro.

If you need to add more than one Firewire card, you'll need more PCI slots, and perhaps the simplest approach is to use a PCI expansion chassis (such as those by Magma and Virtua Via). Alternatively, you could connect a second PC via Ethernet and move some of your DSP cards to this machine, freeing up PCI slots on the main PC. You can still run the DSP plug-ins from the main machine using software such as FX Teleport (www.fx‑max.com). The additional audio delays will all be compensated for automatically during playback, but during recording you'd face extra latency for effects running on the remote PC.