Q. How can I fix timing issues? Skip to main content

Q. How can I fix timing issues?

I'm not new to technology or recording but, having started recording other people in my home setup, I have come across what I guess must be a common problem. However, it's not one I've experienced before. The problem is with some people not being able to play guitar to a click‑track properly or sing in time. I use Cubase 5 as the main host and I know how to correct pitch, but not timing! I have tried — unsuccessfully — to fix these timing problems with Cubase's Variaudio and I can't work out how to fix timing properly with Melodyne. I just want to move complete notes to their rightful spots. I'd like to know if there's a particular program I should be using and how I should actually go about fixing timing issues.

One of the trickiest places to edit is in the middle of a sustained pitched note, but you can often get surprisingly good results as long as you make sure to line up the waveforms as closely as possible through the crossfade region.

SOS contributor Mike Senior replies: If this is the first time you've encountered timing problems, you can count yourself lucky. Dodgy timing is certainly one of the most common shortcomings of Mix Rescue submissions, and even many commercial‑level productions will have had extensive work done on them in this department. Both Variaudio and Melodyne can provide an answer to the problem, but because they do this by time‑stretching — which can cause audible chorus‑like artifacts, especially on polyphonic or distorted parts — I actually still do the vast majority of my timing work using just my sequencer's ordinary audio editing tools. I know from first‑hand experience of Cubase, Logic and Reaper that they're more than up to this task, but I'm also confident that any major sequencing platform would also do fine here. On a basic level, all you have to do is slice out the offending notes, slide them into time and then create crossfades to smooth the joins. Beyond this, the art of getting a good result is in learning how to judge whether a note is in or out of time and in managing the edits as inaudibly as possible.

My main advice for timing evaluation is to make sure you don't just audition the immediate area of suspect timing, because timing is subjectively judged, relative to what's happened before. Listen to a good two bars before the edit you're working on and it'll be much more apparent when the edit is right. For similar reasons, it's possible for a note that's perfectly in time actually to sound late or early if the preceding section, as a whole, is consistently slightly ahead of, or behind, the beat. So be careful of trusting your eyes over your ears while editing.

When it comes to making the edits sound smooth, there are lots of tricks. The first is to put your crossfades just before percussive attack onsets, because they'll actually be concealed, to some extent, by such transients; this is one of the more bizarre psychological audio effects, commonly known as backwards temporal masking, or pre-masking. In such instances, short crossfades (around 5ms) tend to work best. My second suggestion is, if possible, to put edits either into silent periods in the audio signal or noisy parts, such as breaths, sibilants and other consonants. These edit points often don't require any crossfading at all.

For any other edits the main trick is to try to match the waveform shapes on either side of the edit as exactly as possible. If you can do this well, you can usually just crossfade over a couple of waveform cycles to get an edit that is somewhere in the range from passable to invisible. If all else fails, you can hide even quite clunky edits behind big transients occurring on other tracks, perhaps kick or snare drums. In some cases, it can be useful to time‑stretch individual slices a little where there's a bit of a gap to fill, but in practice I don't find I actually need to do this a tremendous amount; it's vocals and sustained melodic instruments that are most likely to require it, because their exposed nature can sometimes reveal normal mid‑note edits ruthlessly.

All that said, for a lot of parts that are buried in the texture of a track, you don't actually have to be particularly discerning with your edits. For example, you can get away with a lot of lumps and bumps in the audio when you're working with double‑tracked acoustic guitar strumming or the individual tracks in a group of layered backing vocals. No‑one is ever going to be able to hear sounds like these well enough to make out the artifacts once the mix is finished.

SOS Reviews Editor Matt Houghton adds: One tip to add to this is that when you're time‑stretching you shouldn't forget that you only want to stretch the offending note and not necessarily the whole phrase, as doing so can put elements such as consonants and note changes out of time. Also, there's a quick 'cheat', which is to mask a slightly short note by automating a reverb or delay send effect, but that won't work in every instance.

Finally, no discussion of vocal timing correction would be complete without a mention of Synchro Arts' excellent VocAlign software for Pro Tools (also now available as an Audio Unit for Logic and Digital Performer). As the name suggests, this is intended to automatically align vocal parts, which makes it great for applications as diverse as overdubbing backing vocals and film‑dialogue replacement. 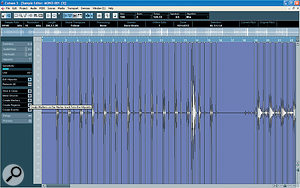 In the March issue of Sound On Sound, Sam Inglis demonstrated how to use markers as hitpoints in Cubase, offering a good way of correcting timing across multiple drum tracks.

Reader Yonatan Barak has responded to Sam Inglis' piece on using markers as hitpoints to correct timing for multitrack drum recordings in Cubase (subscribers can see the article at /sos/mar10/articles/cubasetechnique_0310.htm).

"I was happy to see Sam Inglis tackle this very common problem for Cubase users. However, as my projects usually contain high numbers of markers (mainly for project orientation), I find that using them as hitpoints can be problematic and transferring the drum tracks to another project can be quite clumsy and time consuming.

"My way of doing it is by locating the next event instead of the next marker. After setting the hitpoints, I use the 'Divide audio at hitpoints'command for the duplicated Kick and Snare tracks and a macro containing the following commands: 'Locate next event' and 'Split at cursor'. So the duplicated tracks are highlighted and the rest of the drum events are selected. it's pretty much the same thing, but without the huge amount of markers!”

Mastering Essentials Part 3 - How loud should I master?
1 day 6 hours ago.