Q. How do I interpret software system requirements? Skip to main content

Q. How do I interpret software system requirements?

My PC is a few years old now, but I'm keen to try out some recent soft synths and other audio applications. However, I'm not sure whether my machine is up to the job. Why is there often such a big difference between minimum system requirements and recommended requirements for software, what do such figures mean in practice, and how accurate are they?

SOS contributor Martin Walker replies: I suspect that each developer will have their own slightly different interpretation of the 'minimum' and 'recommended' computer specifications. However, as you might expect, software developers are keen to attract as many customers as they can, so it makes sense for them to spread the net as wide as possible. The main components usually specified are CPU, RAM, Operating System and sometimes hard drive, so let's look at each one of these more closely, starting with the easy ones. 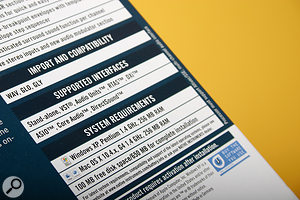 Figuring out what software system requirements really mean in practice isn't always straightforward...Hard disk requirements are often not mentioned at all, and when they are it's mostly a bland statement such as '2GB free hard disk space'. However, where the recommended spec is more detailed, such as 'dedicated 7200rpm sample drive with 8MB cache and 8.9ms seek time', this suggests that the product streams its sample library in real time (rather than loading each patch in its entirety into system RAM), and you're not likely to achieve its maximum polyphony without such a drive.

For any audio software released since about 2001, the specified Operating System will undoubtedly be OS X for Mac users, and Windows XP and perhaps Windows Vista for PC users. However, take careful note of any Windows Service Packs or OS X release numbers specified, since even if you manage to install and run the product on earlier versions, the developer won't give you technical support if you run into problems. A few PC products may also include Vista 64‑bit versions, but these have very specific requirements (to find out more, see SOS August 2008 (/sos/aug08/articles/qa0808_2.htm).

Next up is the system RAM requirement, which is the first component where you may see a significant difference between the minimum and recommended specifications. Minimum specs are often regarded as applying to the product used in isolation — for example, what an individual soft synth might realistically need. In practice, very few people are likely to run just one piece of software like this; most will need to run some sort of sequencer, plus whatever other soft synths, samplers and effect plug‑ins they need to complete their songs. I'm reasonably sure that the latter is what determines the recommended specification.

Many soft synths don't require much system RAM, but note carefully the requirements of those that feature a sample‑based library that doesn't stream from your hard drive. Some may require up to several hundred megabytes of system RAM to load in a single preset, and in the case of multitimbral synths you'll have to multiply this requirement depending on how many simultaneous instruments you want to run.

For many audio applications, the most critical component is the CPU, which will determine how many simultaneous soft‑synth notes your computer will be able to play, or how many plug‑in effects it can run. The difference between minimum and recommended requirements may sometimes increase to a factor of four or more, but once again treat the 'minimum' as being able to run that piece of software alone, and the 'recommended' as a comfortable spec running that product in a typical project with other soft synths and plug‑ins.

Ultimately, all system requirements are guidelines offered by the developer, and not set in stone. For instance, if your CPU is slightly slower than a specified soft synth minimum, you'll probably still be able to run it, albeit with fewer voices. However, you may find yourself getting frustrated at occasional audio glitching as the processor overheads approach 100 percent. On the other hand, if you create complex projects, even the recommended requirements may prove to be conservative.