Q. How do I mike-up a 'Keith Moon' drummer? Skip to main content

My problem is that I'm recording something of a Keith Moon impersonator. He plays very fast, very busily and very loud, especially on the cymbals. When you stand in the room it sounds good, but where I put my mics I get cymbals and hats in everything! I prefer to treat the kit as one instrument when miking, and I don't usually find a problem with spill, or feel the need to gate anything. In fact, I prefer a certain amount of spill, to be honest. However, with this one particular chap I need to come up with some new ideas as far as separation is concerned. I've heard of miking toms from the inside, but does this change the tom sound a lot when you remove the bottom skin?

SOS contributor Mike Senior replies: This is a common problem, particularly with inexperienced players, and I imagine that you've already tried the simplest solution (asking the drummer to hit the cymbals more softly) to no avail. If you're after a Keith Moon-style sound, then I'd not advocate relying particularly heavily on close mics, so my first suggestion (given that the sound seems good in the room) would be to spend a little extra time working with the overhead mics. 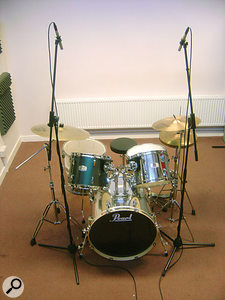 First things first: I'd steer clear of using a stereo crossed pair, as this would put the cymbals more on-axis than the snare and toms. Directional mics tend to produce their brightest sound on-axis, so a crossed pair would accentuate your balance problem. Assuming that you're choosing to use the more usual spaced-pair technique, the main thing is to avoid setting up your mics above the kit, because cymbals radiate their sound mostly up and down.

A better position to start with would be behind the drummer, where the snare and toms will be a bit closer to the mics than the cymbals. I'd then set the height and spacing of the mics to try to keep them as close as possible to the planes of the cymbals. This will probably mean miking only a couple of feet from the ground, and you might be able to get the drummer to re-angle their cymbals slightly to make your job easier. You'll probably have to stay fairly close to kit (within a couple of metres) to make this technique work, so you may not get as much ambience as you want, but you can always add more by recording separate room mics or by using a decent reverb processor at the mixing stage. 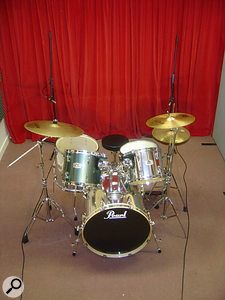 If you're recording a drummer who hits his or her cymbals too hard, conventional overhead-mic positioning (left) can make the problem worse, because the cymbals are physically closer to the mics than the drums are, and they send most of their sound along their vertical axis anyway. The right-hand picture shows an alternative setup where the the mics are now closer to the drums and roughly on the plane of the cymbals. The situation has also been improved further by pulling a curtain across the wall, increasing high-frequency absorption, and by using cardioid mics pointed towards the snare drum so that they pick up the off-axis cymbals less brightly.

If the mics you're using in your spaced pair are cardioid, then you can probably also help things a bit by angling the mics away from the cymbals and towards the drums, again to take advantage of the dulling of off-axis sounds. If you are using multi-pattern microphones, it would also certainly be worth trying the figure-of-eight polar patterns because, depending on the mic placement, you might find that you can position some of the cymbals quite close to the polar pattern's null, and thereby reduce their recorded level quite dramatically.

One other thing to mention is that high frequencies are more easily absorbed than low frequencies. Therefore, rigging some blankets over nearby reflective surfaces (or standing the whole kit on a rug) is a good idea if you want to reduce the cymbal levels before you even set up the mics.

Dealing with the overplayed hi-hat is more of a problem. I find that even underplayed hi-hats tend to get all over everything! By contrast with the cymbals, the hi-hats tend to radiate their sound more on a horizontal plane, but there's a limit to how much you can use this information to your advantage in practice, when your mic placement is also aiming to minimise the levels of all the other cymbals. 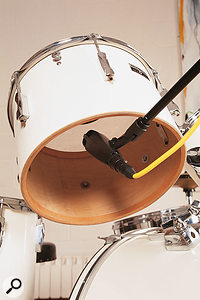 Miking toms from the inside can help to reduce spill. However, you'll need to remove the resonant head from each tom to get the mic in position, which may compromise the sound.

The main practical way to reduce the overall level of the hi-hat in your final mix would be to keep the amount of spill from it to a minimum in any close mics. Clearly, trying to mic the toms from inside would make sense here for that reason, but the sound will probably need more processing at mixdown to be useful to you. The good news, though, is that if you've managed to get a fairly balanced sound out of the overheads, you shouldn't need to use much of the tom mics anyway.

The snare mic is likely to give you the most problems with hi-hat spill, because of the proximity of the two instruments. A hypercardioid or figure-of-eight snare mic could be the best choice here, so that you can more easily point a null at the source of the problem. Another solution might be to mic the snare from underneath, positioning the mic in such a way that it is shadowed from the high frequencies of the hi-hat by the drum itself. (Don't get too close to the snare wires, though, or you'll get a very buzzy sound.) To be honest, though, you'll probably have to gate the hi-hat spill out of the snare mic when you mix, something which isn't too hard to do if you've got side-chain filtering on your particular gate.

If you simply can't get the cymbals and hi-hat low enough at the mix, then you could always use the mixing trick of inserting a stereo gate over the overhead mics and triggering it from a mix of your close mics. You can probably get away with a gating range of about 3dB without the effect becoming too obvious, though you do need to set up your attack, hold and release controls carefully to make this technique work.