Q. How do I re-create the sound of those old string synths? Skip to main content

Q. How do I re-create the sound of those old string synths?

Unlike the first string synths, which had monophonic envelope shapers, the Roland RS202 offered separate envelope articulation for each note.

I am trying to re-create the sound of old string synths like the ARP Solina or Elka Rhapsody on my Novation K-Station but I just can't do it. I have tried all the tricks to create a fat, chorus/ensemble sound — detuning oscillators and so on — but it always sounds like a polysynth, not that string synth sound. Any suggestions?

SOS contributor Steve Howell replies: The way in which the early string synths made that distinctive sound is very different to the polysynths that came after them (including the excellent K-Station).

Old string synths use what's known as a 'divide-down' oscillator, derived from electronic organ technology, as their sound source. This generates a single sawtooth-like wave which, if heard 'raw', sounds very thin. This is then fed into a simple attack/release envelope shaper. Typically, the attack control was labelled 'Swell' and release was called, confusingly, 'Sustain'. But herein lies a problem — although the divide-down oscillator was totally polyphonic, the simple envelope shaper was usually monophonic, which created certain problems. On some string synths, chords would swell in nicely, but playing another note whilst sustaining the initial chord would re-trigger the envelope and the whole thing would fade in again — the original chord and the new note. Other synths worked such that new notes played whilst sustaining others had no envelope shaping. In either case, some care had to be taken with regard to playing technique. The problem was overcome in the Roland RS202 string synth, which had separate envelope articulation for each note, but I digress...

The secret to a string synth's lush and swirly sound is that this thin, envelope-shaped waveform passes through a chorus unit. However, this was not your typical chorus unit, such as you'll find in the Novation K-Station (or other synths, analogue or digital). Instead of a single modulated delay line, a string synth's chorus unit typically uses three delay lines modulated at different rates and depths by independent LFOs. This was intended to re-create the natural phenomenon in real string sections where no player's vibrato is the same, creating a rich ensemble sound. The outputs from these chorus units were then summed to produce that thick 'string synth' sound that is quite unlike the sound of two (or three) detuned polysynth oscillators. 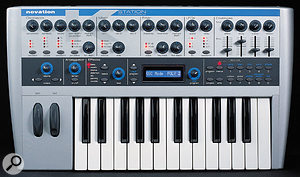 It's possible to imitate the string-synth chorus effect by using an LFO to modulate the tuning of the Novation K-Station's oscillators.

However, it is possible to create something that's close to the classic string synth sound, and modern virtual analogue synths such as the K-Station are often better suited to this than older analogue synths. This is because they have rock-solid tuning, which is a good thing in itself but also better emulates the divide-down oscillators used in the originals, and they generally have better modulation facilities to re-create the ensemble sound. And because the K-Station has three oscillators, it's possible to get quite close to the sound of the three chorus units that string synths like the ARP employed. The same principles apply to other synths though, and I have achieved the same thing on two-oscillator synths.

First select one of the K-Station's 'blank' patches (the 'default' sound — single sawtooth OSC 1, filter wide open), bring up OSC 2 and OSC 3 on the mixer and select a sawtooth wave on all three oscillators (again, the default selection in the 'blank' patches). Tune all three to unison with no detune (Detune value of 0 — again, the default setting). Set LFO 1's speed to around 70, and for OSC 1, set LFO 1 Depth to +5, and for OSC 2, set LFO Depth to -5. All of these values can be adjusted to taste later on. Leave OSC 3 untouched.

That should give you something that resembles the basic detuned, 'chorusy' tone of a string synth. It's not entirely authentic but set carefully, it's pretty close. The trick here is not detuning the oscillators as you might expect but recreating the effect of the three different chorus units by independently modulating the pitches of the different oscillators separately. On the K-Station, because you can only control the oscillators using LFO 1, the fact that one oscillator's modulation is inverted is intended to fake the effect of separate LFOs.

After that, of course, you can do what you want with the sound. Set a slow Amp Env (slow attack and long release, full-level sustain) to emulate a string synth's typical envelope shape and maybe use the K-Station's filter to refine tone. You can add delay and reverb if you want and maybe a hint of chorus to smudge everything, maybe even phasing to re-create the classic Jean-Michel Jarre string synth sound. Experiment with EQ as well — some old string synths were a bit 'honky', so try boosting mid frequencies slightly!. You should also experiment with filter sweeps which will allow many of the sounds possible on the ARP Omni, a curious string synth/polysynth hybrid. For experimentation, try selecting a pulse wave on one of the oscillators and maybe even some PWM controlled by LFO to add further separate animation. You might also like to drop OSC 3 by an octave to create the sound of a lower footage being switched in.

Mastering Essentials Part 3 - How loud should I master?
2 days 16 hours ago.