Q. How do I record drums in a church? Skip to main content

Q. How do I record drums in a church?

I have the opportunity to record in a church that is of modest size with high ceilings and a lively acoustic. I'm thinking about using this room to track drums for my new album. Would you advise recording there, or would the acoustic just be too overbearing? I want a clean, natural‑sounding recording for a folk band, so I was thinking this room might offer the right sort of character.

SOS Technical Editor Hugh Robjohns replies: The limiting factor with most home project‑studio drum recordings is a combination of a generally dead‑sounding space, with little in the way of diffuse reflections, and a serious lack of height, which prevents the overhead mics being placed optimally. What you tend to get is a strong (but not diffuse) early reflection from the ceiling, which tends to degrade the quality of the sound captured — not only of the overheads, but sometimes the close mics too — and doesn't contribute in a nice way to the drum sound. The only solution is to make the recording space as dead as possible and then add artificial reverb to inject some life back into the drum sound, but the source often still sounds coloured and unrealistic.

A reverberant space often works well with drums because the diffuse early reflections add a welcome presence and scale to the drums without overpowering the direct sound. But typically we're talking about a modestly sized reverberant space here — a stairwell, for example — so that the early reflections are strong and the reverb time not excessive.

Recording in a typical parish church will provide the benefit of a very high ceiling, but most also have pretty lively acoustics with relatively long reverb times. This kind of acoustic character works well with some kinds of instruments and genres, but it's not a sound character I generally associate with folk music, which usually requires a more intimate treatment. All is not lost, though, and the benefits of the large space can still be used to your advantage if you are prepared to spend some time and effort controlling the acoustics and experimenting to optimise the arrangement. 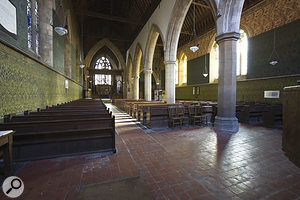 If you've got the opportunity to record drums in a church, it may be tempting to just go for it and set up right in the middle of the nave, to take advantage of the large-space reverberation. However, this kind of natural reverb can be hard to tame, and choosing one of the smaller spaces a church has to offer, such as a porch or vestry, may well produce a more usable sound.

The first thing to do is identify a suitable recording location within the church. Setting the kit up in the middle of the nave is probably not going to work: you'll need somewhere more enclosed to generate some strong early reflections. An entrance porch or a vestry might provide a more appropriate acoustic, or perhaps setting up in the aisle between the choir stalls.

Once you've found somewhere that produces the right kind of early reflections, you'll probably have to try to tame the long reverb tails, and that will come down to the use of carpet and drapes. Suspending large duvets from hired‑in lighting stands will make a worthwhile difference if you experiment with their placement around the kit, to help shield the overhead mics, in particular, from the worst of the long reverbs. Remember that a cardioid mic is most sensitive to sounds from in front and around the sides, so rig the duvets (or whatever) in front and to the sides of these mics to try to stop reflected sounds from being picked up.

The low-frequency end of the reverb will be the most difficult to control — drapes and duvets won't do much at all — so be prepared to high‑pass filter the mics (especially the overheads) to reduce any tendency to boominess and muddiness!

Close‑miking will obviously provide the best direct/reverberant sound balance, and you can mix in one or more 'space' mics set up further down the church to bring a more reverberant quality to the balance. Compressing the 'space' mics quite heavily and mixing them in at a low level often works well.

Judging the subtleties of a miking situation like this on headphones is very tricky, so my approach would be to do an experimental setup and recording: multitrack each mic and try out several alternative techniques. Document everything carefully with measurements, photos and whatever else you need to be able to recreate the setups later. Then take the recordings back to your studio, experiment with balancing the mics and listen critically to see what works and what doesn't.

You can then either go back and experiment more to further optimise the setup, or if you find one of the arrangements delivers the sound you want, simply go back and record the tracks using the best rig from your experimental recordings.