Q. How do I transfer an old tape to CD? Skip to main content

Q. How do I transfer an old tape to CD?

I have an old Scotch magnetic tape from the '60s that needs to be transferred on to CD. I have no idea how to do this, but I wonder if you could point me in the right direction?

News Editor Chris Mayes-Wright replies: I think it will depend on what condition your tape is in. If it's in good nick (ie. it has been kept in a cool, dry place), you should have no problems. Actually getting it on to CD is a doddle; just feed the line outputs from your tape machine to a suitable input on your computer's soundcard, load up some recording software — if you don't have any, Audacity is free and very good (http://sourceforge.net/projects/audacity/) — and hit Record. Then burn an audio CD when you've top-and-tailed it. 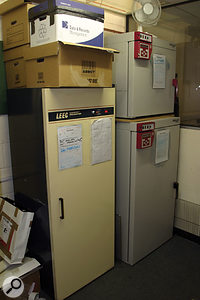 FX Copyroom's tape baking ovens will dry a tape out in a few days, with a constant temperature of around 50 degrees Celsius. Conventional domestic ovens don't go this low, so it is important that you leave your sticky tapes in the hands of professionals.

As your tape is from the '60s, it should pre-date 'sticky shed' syndrome, a problem that occurred in some tapes made from the mid-'70s to the early '80s. It happened due to the adhesive binding that fixes the plastic tape to the magnetic oxide absorbing moisture from the air and, in the worst cases, left tapes unplayable. If your tapes are affected, they need to be 'baked' in a temperature-controlled oven at low heat for several days. In SOS September 2005, we featured the services of FX Rentals' Copyroom, who specialise in tape restoration, and deal with everyone from the major labels to relatives of the departed, who want to salvage their loved ones' recordings. For more information on this technique, SOS May 1996's 'Salvaging Archives' article looked at ways to bake your own tapes.

Though it may not be suffering from 'sticky shed' syndrome, you must bear in mind that your tape is still very old, so it's advisable to take great care when handling it. Scotch used to print advice on their tape boxes suggesting that tapes should be wound to the end and rewound before playing, if they haven't been played for a while. If we're talking about 40 years, however, it may be a different matter. You could try rewinding by hand, which will take a while, but will ensure that you notice any flakey oxide, or splicing tape that has lost its stick, before it's too late. If in doubt, get in touch with the experts at FX Copyroom (www.fxrentals.co.uk/copyroom).