Q. How should I use my new multi‑pattern microphone? Skip to main content

Q. How should I use my new multi‑pattern microphone?

Having been using a cardioid mic for some time, I've just bought an Audio‑Technica AT2050. Although my decision was partly based on the flexibility of its switchable polar patterns, I've not ventured beyond the cardioid pattern that I'm used to since I bought it. How can I use the different patterns? Are there any creative techniques I can use?

SOS Reviews Editor Matt Houghton replies: This is probably a rather broader topic than you realise, but it's great that you're showing curiosity and a willingness to learn! Generally speaking, the best thing to do is to learn through trial and error: try out the different patterns and compare the results. Even with all the theory in the world, you need to make errors in order to learn! That said, we've published several features over the years that discuss this topic in more detail (for example, there's one in SOS March 2007: /sos/mar07/articles/micpatterns.htm), and I'd suggest that you have a read of some of those.

To get you started, though, I'd recommend investigating the figure‑of‑eight pattern, which is really useful where you want to reject sounds off to the side: you point the null at the bit you want to reject, and the front (or rear!) at the bit you want to capture. Bear in mind that the trade‑off in achieving this excellent off‑axis rejection is that you pick up as much sound from the rear as you do from the front, so you either need to be working in a nice‑sounding room, and be happy to capture ambience, or to have some sort of acoustic shield placed behind it. I find that figure‑of‑eight mics often make very useful room mics: you'd set them up to pick up room ambience only, with the null pointing toward the sound source. 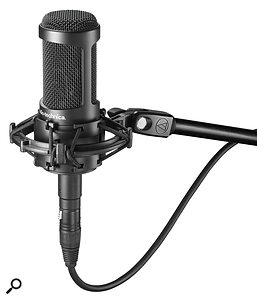 A multi‑pattern mic, like the Audio‑Technica AT2050 shown here, provides a relatively inexpensive way to try out different polar patterns. If you already have a cardioid mic, you could use the two in conjunction to start experimenting with stereo miking techniques.

If you have another cardioid mic handy, you could try Mid/Side stereo recording, with the cardioid mic (it could actually be an omni, figure of eight or anything in between, but cardioid is more typically used) pointing toward the sound source and the figure-of-eight rejecting the sound source but picking up from left and right. In this instance you record three tracks: the cardioid, and two signals from the figure of eight. Polarity‑invert (ie. flip the 'phase') one of those figure‑of‑eight signals, and route both to a group channel in your DAW, and you have a mono‑compatible stereo recording whose width you can alter by balancing the cardioid's fader with the figure‑of‑eight group fader. If this whistle‑stop explanation is a bit brief, you can learn more about the technique at /sos/feb02/articles/cheshire0202.asp.

The polar patterns available from most multi‑pattern microphones include the three shown here: (left to right) cardioid, omnidirectional and figure of eight. The diagram shows where the polar pattern picks up sound and where it rejects it.The omnidirectional pattern is also potentially very useful. As this is a large‑diaphragm mic, it's probably not as true an omni pattern as you'd find in a small‑diaphragm capsule, but it should give you a much more 'honest' sound than you'd get from the cardioid pattern, so if you're looking to capture the sound you hear in the room, an omni is a good bet. Beware again, though, that this pattern picks up sound from all directions. That makes it great for one‑track‑at‑a‑time recordings (it's a good bet for acoustic guitar, for example), but you need to be in a nice‑sounding space — not too near to reflective surfaces — and it makes it a poor choice if you need to achieve separation between different sound sources.