Q. I am deaf in one ear; can I mix with monaural hearing? Skip to main content

Q. I am deaf in one ear; can I mix with monaural hearing?

I use Logic Express 8 software and an Apogee Duet interface to record guitar and vocals in a small room at home. Unfortunately, I am 100 percent deaf in my right ear and wonder if you can offer advice on mixing tracks in light of this problem. Perhaps I should leave mixing entirely to someone with two ears? 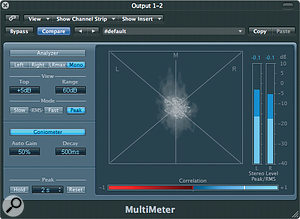 Logic Pro's Multimeter plug‑in has a Goniometer display to assist with stereo balance while mixing, and various third‑party stereo monitoring and manipulation alternatives are also available.

SOS contributor Martin Walker replies: You can certainly do a lot of mixing with monoaural hearing, Ed. You'll still be able to balance the elements of your mix as well as anyone else, and make decisions about the front-to-back distance of different sounds based on their relative levels and the amount of high frequencies they contain. You may also find that you notice musical nuances that others miss, since constantly listening through one ear can improve its perceptive powers.

Your best approach is to start by creating mono mixes. After all, mono compatibility is important for commercial releases, since this is how many listeners will hear music on portable radios, on club PAs, many TVs, the Internet, and in areas with poor FM radio reception. Moreover, even when you have good hearing in both ears and the final format is stereo or surround, many experts suggest first creating your mixes in mono, since this can help greatly in establishing a good balance between the various instruments.

Many musicians rely on panning different instruments across the stereo field to give some physical separation in a stereo mix. However, mixing in mono forces you to choose sounds that don't fight each other in the first place, as well as arranging them with the same goal in mind. This will usually result in a better mix when one starts positioning the various sounds in stereo, but is the point at which you will probably have more difficulty.

With guitar and vocals you'll experience few problems, since in a real performance both of these sounds will come from essentially the same point in space (most people would either use a central stereo pan position for both, or place them slightly either side of centre), and be supported either by the stereo acoustics of the room they were recorded in, or by a little stereo reverb whose amount you should also be able to judge well. I see no reason why you shouldn't be able to achieve good mixes of these songs.

Things may get trickier with more complex stereo mixes. Producer Terry Manning's 'Cardinal Points Law' suggests that using centre, hard left and hard right pan positions as a starting point will always give you a clear stereo mix, with less important sounds added to the in‑between positions, so you could use this approach based on the physical positions of the performers in real life to achieve a good starting point for a stereo mix.

However, many musicians find they ideally need to modify the EQ or relative levels slightly once they move from a mono to a stereo mix, so at this point I suspect you'd benefit from collaboration with another musician. That is, assuming you want to create a stereo mix — after all, the 'Back To Mono' movement has a surprising amount of support!

SOS Technical Editor Hugh Robjohns adds: My immediate reaction to this question was that you should simply arrange to monitor in mono on a loudspeaker. The advent of surround has made it far easier to buy a single speaker, so your budget is effectively doubled — you can buy a single speaker that's twice as good as the pair you'd usually be able to afford. You should be able to configure Logic to provide a fixed mono sum output for your monitoring.

Achieving a good balance in mono means that you're 95 percent of the way there for stereo anyway — for all the reasons Martin has said. All that is then left is some panning for a stereo output, and much of that can be done on a purely notional basis. Kick, snare and vocals in the centre, guitars panned one side, keys to the other, and so on.

Something that would help a lot, though, is a decent stereo image display. Something like the DK Technologies 'Goniometer' display (or stereo vector display) that I use would help you to establish that the left‑right balance is consistent and the stereo width is appropriate. Logic Pro's Multimeter plug‑in has a Goniometer, but I think you may not have that in Logic Express. [Consider instead PSP's Stereo Analyser plug-in, from the PSP Stereo Pack at $49 (www.pspaudioware.com) or the freeware Flux plug‑in from www.fluxhome.com/products/Freewares/stereotool.] Using that kind of display, you should be able to visualise the stereo image and form a good impression of how binaurally‑able people would hear it.