Q. Should I pad or DI a line-level signal? Skip to main content

Q. Should I pad or DI a line-level signal?

Q Should I pad or DI a line-level signal?

I keep reading advice that it's bad for a padded line signal to be run through a mic preamp input, and that it's better to use a dedicated line input — but you're not always given the option! So, what exactly are the benefits and problems inherent in either approach? Also, is padding any different from using a DI box?

SOS Technical Editor Hugh Robjohns replies: To be honest, there is no absolutely right answer here: practicalities usually outweigh the geeky technical arguments. As a general preference, though, it is better to connect a balanced line-level source directly to a dedicated line-level balanced input, if you have that option. This will maintain the best possible signal quality and the least possible noise. 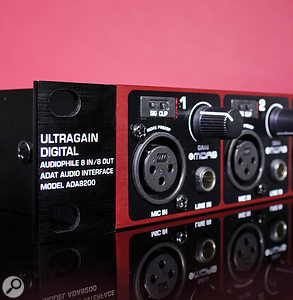 Running a padded line signal through the mic preamp is a common practice in many modern preamps. Does it really compromise your sound?

In theory, it really isn't the smartest idea to attenuate a line-level signal and then run it through a mic preamp, because both the attenuator and the preamp will introduce some noise and distortion — and all just to return the signal back to line level, where it started! Thankfully, the quality of modern electronics is such that, in practice, the amount of added noise and distortion are usually negligible. For the vast majority of applications you just won't notice the difference between the 'pad-and-preamp' and 'direct-line-buffer' approaches,and it is a fact that most budget and mid-level mixing consoles and interfaces use the 'pad-and-preamp' technique to save cost and design complexity. So even if you do connect your live-level source to what appears to be a line-level input, it may well be that it is actually being padded and routed through the mic preamp anyway!

A DI box does also attenuate the line-level signal to mic level, and so you still run the risk of potentially introducing some noise and distortion. But again, such vices are usually negligible and are far outweighed by the convenience and safety benefits. DI boxes are generally intended to interface unbalanced line sources, and so passive DI boxes employ a transformer which not only performs the attenuation, but the conversion to a balanced mic-level output, too. Importantly, it also provides galvanic isolation between the input and output grounds, which can be very helpful if you have ground-loop hum problems.

So in summary, use a dedicated line-level input if you have one, but if not then padding the signal and running it through a preamp, or using a DI box, are both perfectly acceptable alternatives, which may well be more practical and convenient.